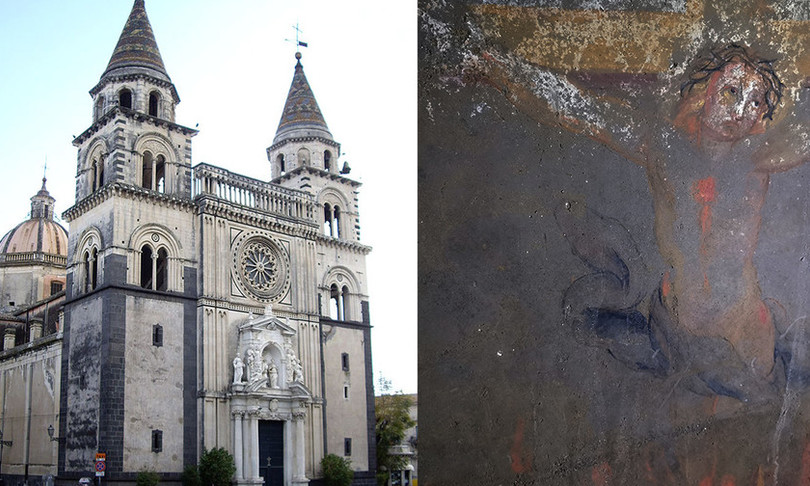 In the Cathedral Basilica of Acireale, in the Catanese area, a crypt was found with a valuable fresco depicting Jesus crucified, a young man with open eyes, serene eyes and souls in purgatory surrounded by flames. It was the architect Paolo Bella who conducted the historical-architectural studies that involved the most hidden space of the entire monumental building, which occupies what was originally a cemetery area.

Once the opening was created, it was possible to access the crypt and admire the fresco. The room is in a good state of conservation, both as regards the plasters and the wall structure, as well as the drains.

“This is – explains the diocese – a not indifferent discovery, which demonstrates how the subsoil is rich in works and artefacts that are still hidden. The site is still being studied and made safe in order to ascertain in which historical period it dates back. the discovery “.

Founded at the beginning of the 15th century and dedicated to Maria Ss. Annunziata, the church with a single nave began to take on a basilica appearance at the end of the 16th century, when the apses, the dome and the transept were built. The fresco, explains Bella, “has not yet been dated, but it is presumed to be indicative at the turn of the 1500s and 1600s. It is covered with several layers of dirt and dust, but there is a minimum of air circulation. Fortunately it is well preserved. The crypt space is just two square meters. There – he continues – there was the cemetery of the brotherhood of San Pietro “.

The story of the discovery of the crypt is intertwined with an example of private patronage. Bella, who works in a credit institution, has not only convinced the bureaucracy to start the excavations but, together with his wife, is the main financier: “I have been working on this discovery for three years, after having investigated with historical documents the rumors that spoke of the crypt since the pavement of the Cathedral was made and vaguely indicated burials. We inserted an endoscopic camera in the floor, and ‘saw’ this compartment. Finally we were able to go down under, in one space of just two square meters. I presume that there may be more: this is the second crypt in the Cathedral, under the chapel of San Clemente there is already a crypt but it is not frescoed. Here too there are the drains, which confirm the presence of the rite of mummification“.

Who funded the discovery? “At my own and my family’s expense – he replies – I have been involved in both historical research and the equipment necessary for the work. It is a gift to my city, from my wife and me”