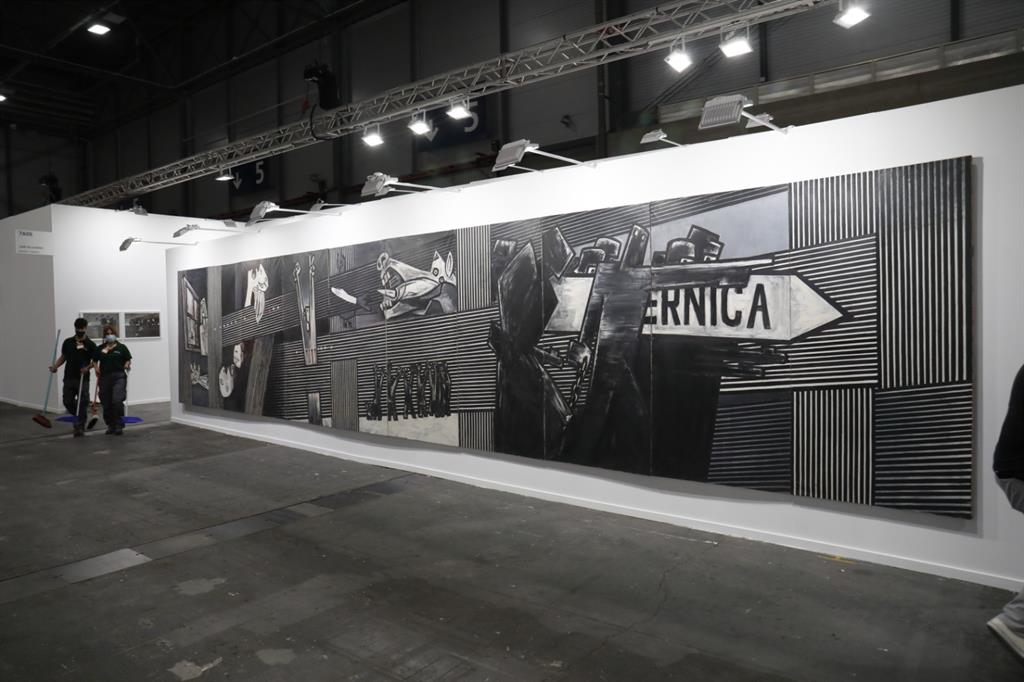 Santiago Sierra, the author of ‘Ninot’, repeats in the Helga de Alvear gallery with some photographs of war veterans

The ARCOMadrid contemporary art fair will open its doors again this Wednesday, July 7, on exceptional dates due to the pandemic, but which for the moment have not meant a step back in the start of sales, some of them “large”, or in negotiations for the most attractive works.

One of the pieces that has attracted the most attention in the days leading up to the fair has been the ‘Guernica’ by Ibarrola, a work by the Basque master that has been forgotten for four decades. It was made in 1977 with the idea of ​​claiming the transfer of Picasso’s Guernica from MoMA to a future museum in the city of Guernica, and was exhibited on several occasions, until it was cornered in the artist’s studio.

The José de la Mano gallery has recovered this piece and its director has confirmed to Europa Press that they are already in negotiations with three institutions, two public and one private, without wanting to reveal for this reason the price of a mural that measures 10 meters by two high and is made up of ten panels.

“Both we and the family had decided that this work should end in a public or private institution with a vocation to that service. We were obliged, because we did not want it to be hidden again,” said De la Mano himself, who has explained that his bet for this edition was to “go with everything” and that this work entered “at the last moment”.

It is not the only moving sale that is already closing at the fair, still without opening the doors. One of the most active, as has become customary in recent years, has been Helga de Alvear, who explained that she has already bought five pieces, some of them “super works.” The only acquisition that has been revealed has been a sculpture by Richard Serra in the Guillermo de Osma gallery.

The Catalan gallery Senda has already sold a triptych by Gino Rubert to the MNAC for 87,000 euros in which numerous artists such as Duchamp, Tapiès or Miquel Barceló appear. And Glenda León’s ‘Heavenly Bodies’ have also found a buyer for 12,000 euros. Another relevant piece of this ‘stand’ is the sculpture by Jaume Plensa, ‘Sitting tattoo’, on the contrary, it is still waiting for a buyer for 350,000 euros.

From the ADN gallery, director Miguel Ángel Sánchez has pointed out that there are two reserved pieces: one by the artist Abdelkader Benchamma for 16,000 euros and another by Mounir Fatmi for 23,000 euros. And in the Juana de Aizpuru gallery there is also a work sold, a sculpture from the 80s by Cristina Iglesias for which the price has not been released.

As in previous editions, the prices of the works oscillate in a wide range. In the Cayón gallery you will find ‘2ª blanca (Great white writing No. 2), by Jesús R. Soto, which is currently the highest priced piece – more than one million euros -, in the absence of knowing others. In the Leandro Navarro gallery, for example, there is a Picasso for 780,000 euros, while in Guillermo de Osma there is a Richard Serra for half a million euros.

THE POLEMIC IN ARCO: SANTIAGO SIERRA IS BACK

The director of the fair, Maribel López, already warned in the previous days in an interview with Europa Press regarding the controversy that usually exists in some editions that she hoped would “be far away.” “It disperses the attention of what is important, because art needs to be seen calmly,” he remarked.

On this occasion, the ‘enfant terrible’ of art Santiago Sierra and Eugenio Merino will be present again (authors of works such as ‘Political prisoners’, in the case of the former, or the ‘Ninot’ del Rey, the latter joint). Sierra repeats in the gallery Helga de Alvear with some photographs of war veterans (Vietnam, Cambodia …) facing the wall – its price is 22,000 euros.

“He is one of my favorite artists and it makes me very angry that he has this fame here, not like in other places in Europe. He makes a political art and is against everyone, but he always tells the truth,” he pointed out to Europa Press. gallery owner Helga de Alvear, who jokingly pointed out that this piece “is not to be hung in the living room”.

NO NEWS OF THE PANDEMIC

On the other hand, Merino exhibits several pieces in DNA, from an urn for 4,800 euros, to a framing of the declaration of human rights, also for a similar price. “In this country, any different step in art is complicated,” acknowledged the gallery director. Interestingly, few pieces allude to the coronavirus pandemic.

Siméon Saiz Ruiz’s ‘Madrid during the first weekend of disarray’, takes a press photo of that moment and “decodes” it. For 30,000 euros, this work by an author who has worked in this way for many years on conflicts such as the Balkan War or revolutions such as the Arab Spring is on display at the F2 gallery.