The Kings support the return of ARCO, celebrated on exceptional dates due to the pandemic 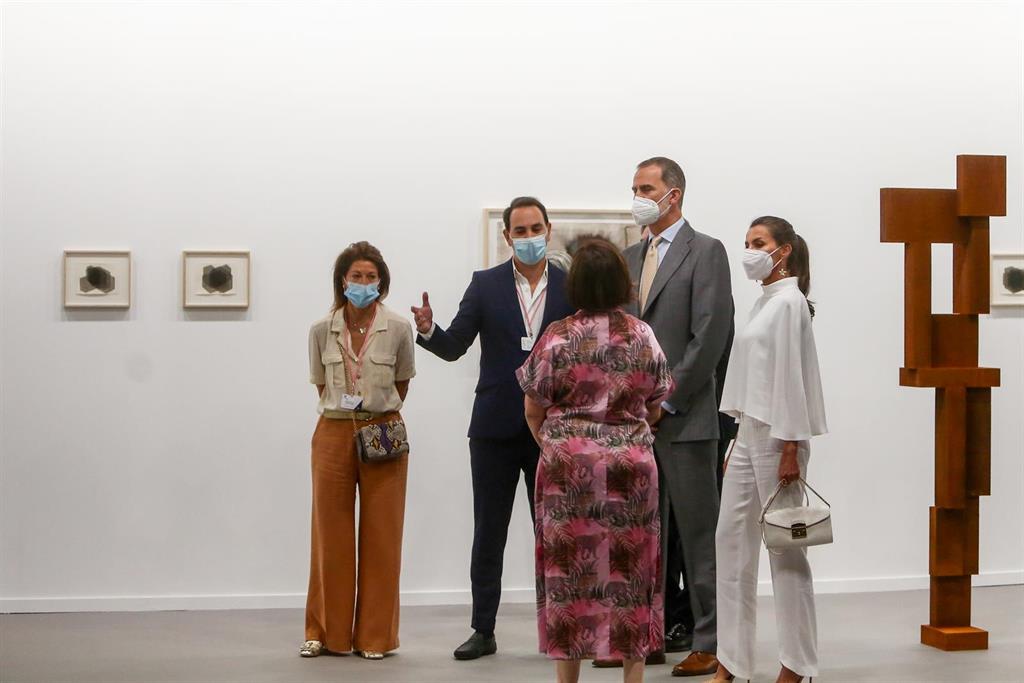 The Kings Felipe VI and Letizia visited the 40th edition of ARCO for about an hour this Thursday, July 8, the contemporary art fair that is being held in Ifema Madrid and that will remain open until this Sunday.

The visit of the Kings in this edition of the fair is special because it is the first time that ARCO has been held in person at Ifema Madrid since the beginning of the pandemic in Spain, which is why it is held on exceptional dates.

For this reason, several of the gallery owners who have been present in the last editions of ARCO have been doubtful about the success of this exceptional fair in July.

During their attendance at the contemporary art fair, the Kings have seen the works of about a dozen galleries. The fair is being held in pavilions 7 and 9 of Ifema Madrid, in a space with a capacity reduced to 50 percent due to the measures against Covid-19.

The Kings have begun their visit around 12.00 in Hall 7 of Ifema Madrid. Their first stop was at the El País stand, where they stopped for a few minutes.

INTEREST IN THE SITUATION IN FRANCE

Subsequently, Felipe and Letizia, dressed completely in white, have continued the march through corridor 7B, where they have stopped for a few moments to observe the works of the French gallery Thaddaeus Ropac and have been interested in the situation in the neighboring country.

“It has been a difficult year, the Kings have been interested in how the situation was in Paris and in France, which is where we are,” José Castañal, from the Thaddaeus Ropac gallery, told Europa Press.

In this gallery, the Kings have known the works of the artist Antony Gormley. “We have commented a little about our participation in the fair in this important year and our presence with an individual stand of Antony Gormley, we wanted to participate in a more special way this year”, explained Castañal.

“We have explained a little about the artist’s work and a couple of comments about how the situation was in France, which is where we have the gallery,” said the expert.

In this area of ​​the fairgrounds, their Majesties have also visited Leandro Navarro, one of the main avant-garde and modern art galleries “; the Helga de Alvear gallery; or the Sevillian Rafael Ortiz gallery, which has participated in ARCO since its inception.

After about half an hour in pavilion 7, the delegation continued their way through pavilion 9 of Ifema Madrid, where the Kings visited the Pedro Cera galleries in Lisbon (Portugal); Nordenhake, gallery founded in Sweden; o Senda, Catalan gallery.

CURIOSITY ABOUT A WORK THAT REPRESENTS A SCENE FROM ‘LA ILÍADA’

At the Portuguese Pedro Cera Gallery, the Kings have stopped for several minutes to observe Austrian artist Oliver Laric’s sculpture ‘Ram with Human’, based on a 3D scan of an original 2nd century marble sculpture.

“The King knew the history of the work, which represents Ulysses and his men fleeing from the cave of the Cyclops, by Polyphemus, and we have talked about it”, the director and founder of the gallery, Pedro Cera, explained to Europa Press. noting that Felipe VI “found it curious” that this scene from ‘The Iliad’ was represented.

The founder of Pedro Cera has been “very happy” for the Kings to show “their support for art”: “I think it is important, the support of the Royal House is a long historical tradition.”

“It seems very important to me to continue with this path, it is important that the Kings show their support for ARCO every year,” celebrated Pedro Cera, who has assured that, although they have not spoken with the Kings about the situation for the Covid-19, “there were other Portuguese authorities who are likely to have discussed the matter with them.”

The visit of the Kings ended in the ‘Opening’ space, where they greeted the curators of the section Övül Durmosoglu and Julia Morandeira. After a little less than an hour of visiting, Felipe and Letizia have left pavilion 9 at Ifema Madrid

At the end of the visit of the Kings, the Minister of Culture and Sports has highlighted in statements collected by Europa Press the “importance” that ARCO has this year, for which he has congratulated the organizers. “We have not lost any year. Last year we were able to celebrate it before the pandemic and now it has been very well organized so that this year we can also have this wonderful fundamental fair for contemporary art,” he indicated.

In this edition, more than 1,500 artists and a total of 130 galleries from 26 countries participate, of which 105 make up the ‘General Program’, adding to them the curated section ‘Opening’, with ten galleries, and ‘Sender. Latin American Art ‘, with representation from fifteen galleries.

During the presentation of ARCO, the general director of Ifema Madrid, Eduardo López-Puertas, highlighted that the presence of the Kings at the fairgrounds “represents the firm support of the Royal Household for contemporary art.”