The Film Academy proposes a “sequence shot” for Berlanga’s life 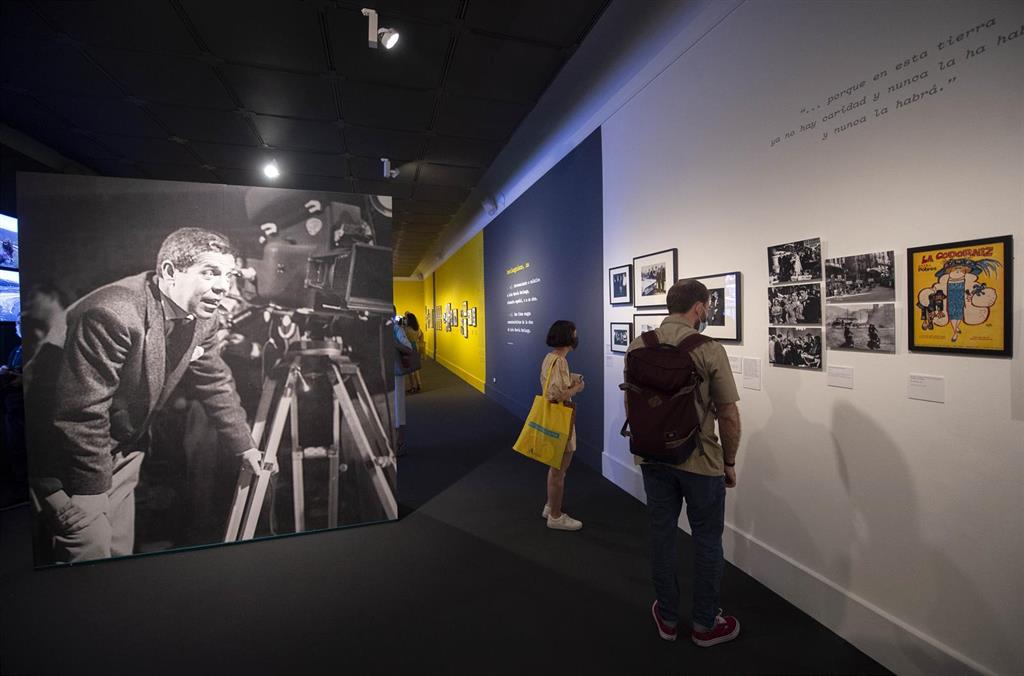 The Film Academy has inaugurated –with the official presence of the Kings – the exhibition ‘Berlanguiano. Luis García Berlanga (1921-2021) ‘ at the headquarters of the Royal Academy of Fine Arts of San Fernando, where it will remain until September 5, and which can be understood as “a sequence shot” of the films by the author of ‘Plácido’.

This has been explained by the president of the Film Academy, Mariano Barroso, who considers that This show is the “culmination of a long cherished project”.

“It is an audiovisual encyclopedia of the last decades of the country and summarizes what we are, what we wanted to be and our miseries and greatness. All casual, as Berlanga did, which makes him more popular, “he pointed out.

On ‘Language’ photographs of the filmmaker’s shootings are collected; snapshots of the author; scripts; sketches or librettos that did not materialize.

Curated by Esperanza G. Laver, it contains more than 170 photographs from different archives and public and private photographic funds and includes a video with the actors that he directed – more than 100 interpreters.

‘That happy couple’, the debut of Juan Antonio Bardem and Luis García Berlanga himself, serves as the starting signal for an exhibition that also offers a look at “moments of Spanish life” through the eyes of numerous photographers. “They knew how to look at that autochthonous reality and claimed in a certain way the Spanish realism that Berlanga wanted so much “, Claver has pointed out.

Some of the photographs draw attention because of the characters that appear in them – for example, the dictator’s wife, Carmen Polo, together with a young Carmen Sevilla or the film director Orson Welles with the actress Geraldine Chaplin at the Berlinale in 1968 -, while others focus only on important moments in Berlanga’s life –such as his beginnings teaching at the Official Film School or a moment of concentration in the filming of ‘El verdugo’ -. Divided into modules, each one of them points to outstanding titles in Berlanga’s biography.

From ‘Feel a poor man at his table’ – the famous slogan he invented for ‘Plácido’ and which was the original title of the film’s script – to ‘Spain is different’ that puts the focus on perhaps his most film famous, ‘Welcome Mr. Marshall’.

BERLANGA AND THE GOYA AWARDS

There is also a final space – under the title of ‘From here to eternity’– reserved for the relationship between the Academy and the Valencian filmmaker.

Berlanga, who was honorary president of the institution and one of its founders, only received one Goya Award throughout his career –in 1994 for ‘All to jail’-, and that moment is also captured in a video.

The exhibition also has, among other documents, original sketches of ‘Bridegroom in sight’, ‘The executioner’ and ‘Welcome, Mister Marshall!’; the original posters for ‘The National Shotgun’ and ‘National Heritage’; the filming plan for ‘National Heritage’ or the pressbook for ‘Welcome Mr. Marshall’ that was presented at the 1953 Cannes Film Festival.

There are also script excerpts with their annotations; the librettos for the two versions prior to ‘La vaquilla’, ‘Los aficionados’ and ‘Tierra de no one’, which he wrote hand in hand with Azcona; drawings of sets and scenographies for his feature films or the Goya that received Best Direction for ‘Todos a la prison’.

This exhibition three days before the exact hundredth anniversary of the filmmaker’s birth It also coincides with another important event in the Berlanga centenary.

The Cervantes Institute will unveil this Thursday, June 10 the legacy deposited 13 years ago by the director of ‘El verdugo’ in the Box of Letters where his legacy is found. Berlanga personally deposited this legacy on May 27, 2008 in box number 1034, the content of which is unknown.

Only this Thursday will the content of the legacy be revealed, since the also screenwriter (Valencia, June 12, 1921 – Madrid, November 13, 2010) did not want to discover it on that occasion, one of his last public appearances.