“I always try to carry the shield of Spain, I have not seen anything more inclusive” 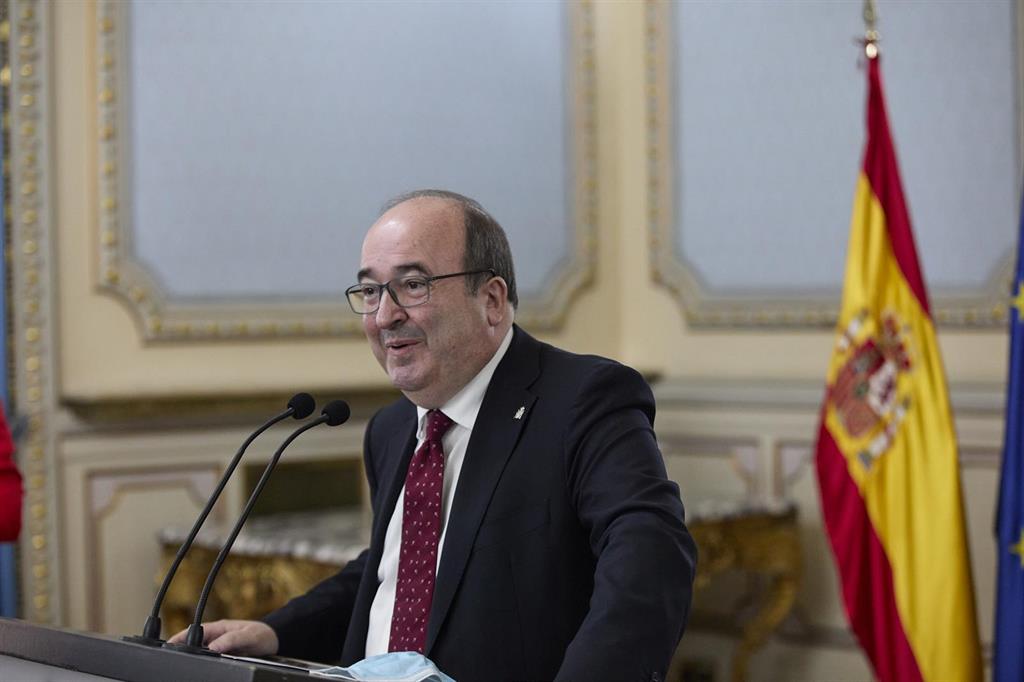 Miquel Iceta has assumed this Monday, July 12, the portfolio of the Ministry of Culture and Sports claiming the importance of “talking about Spain”, something that “it costs people” but that the Catalan politician tries to claim by wearing a badge with the Spanish shield as in this act.

“You have to talk about Spain, there are people who find it difficult but not for me. I always try to wear the coat of arms of Spain because I have not seen anything more inclusive, inclusive, diverse and powerful. We are a great cultural and sports power in the world and we are in a position to be a great superpower“, has indicated in the inauguration celebrated in the headquarters of Culture.

The outgoing minister of the branch has attended this act, José Manuel Rodríguez Uribes, and the Minister of Finance and Public Function, María Jesús Montero, in addition to prominent public officials from both the cultural and sports sectors. Precisely, Iceta has directed some of her first requests with humor to Montero.

“It is only fair that culture receives recognition but also a renewed impulse. We could not start better in the presence of the Minister of Finance and I call on you that this renewed impulse summon us all. I think the bases are there, the people are there, the sensitivity is there, but we have to promote with cooperation and help going far“, he highlighted, directing his gaze to Montero.

Iceta has continued its defense of the union in these sectors claiming “to be very proud of diversity”. “But also strong in our unit, because the combination of these elements will make us unbeatable.“, he remarked, to later qualify Spain as” a country of creators with a vital and powerful common language. “

“Several languages ​​coexist in Spain, but I do not want to neglect the enormous importance of the Spanish language in Latin America and the United States. We have the duty to maintain that flame and passion that has made us enjoy Ibero-American literature and allows us to connect with our brother peoples, “he indicated.

In his speech, he recalled the work of previous ministers of Culture –among those mentioned, the ‘popular’ Íñigo Méndez de Vigo or the current president of the Prado Museum board of trustees, Javier Solana– were present and also expressed his gratitude to the President of the Government, Pedro Sánchez.

“We want to take Spain as far as possible and the list of things underway is tremendous“said the minister, who has put pending legislative issues on the table such as the Artist Statute, copyright, the Patronage Law or support for creators through tax incentives.

“I have done more than a motto from dialogue, negotiation and the pact: a way of understanding politics. And that is what I am going to continue practicing in this Ministry, I will follow the line of my previous department – of Territorial Policy – even more if possible “, Iceta has defended.

The new minister has also made several allusions to the sports field before the eyes of the president of the RFEF, Luis rubiales, and the president of the COE, Alexander White, and especially remembering one of the most imminent events on his calendar: the Tokyo Olympics that will open on July 23.

“We must promote sports practice and we are going to do it. I join in everyone’s wish that our athletes have the greatest triumphs at the Olympic Games. And stimulating women’s sports, that for many it is being a discovery and is banishing homophobia from sport: with this we will get to have the country we want to have “, he added.

Already outside the obligations of her department, Iceta has also referred to the case of the death of the young man Samuel Ruiz, “victim of homophobia”. “I can’t stop thinking about him, brutally murdered victim of violence, intolerance and, yes, homophobia. I vindicate culture against hatred“, has defended.

For his part, the outgoing minister Uribes He has dedicated a short speech to thank various people for their help and collaboration during his tenure, using a phrase from the writer GK Chesterton to summarize it: ‘The proof of happiness is gratitude’.

“I want to thank my friend Iceta, congratulate him and welcome him to this house and say that although he is a person with criteria and abilities, I want to wish him luck and success. Skills and criteria are not lacking. Goodbye and I carry you in my heart. It has been an extraordinary experience“, it is finished.