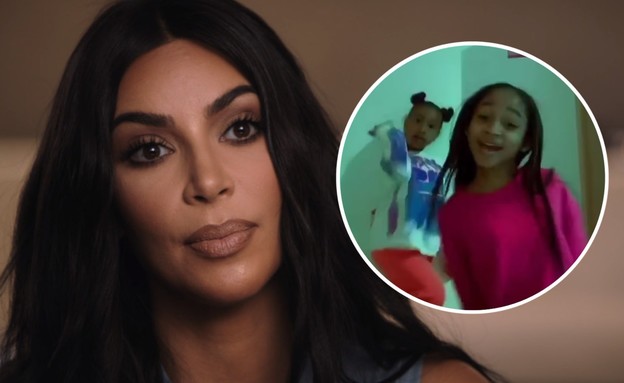 It’s no secret that the Kardashian girls are doing everything to keep their image in the networks in their hands, but for the storm that is raging in these moments between Kim Kardashian and her people and a 14-year-old girl – no one was ready.

Lei-Lei is a 14-year-old network star and a young rapper at the beginning of her career. About a year ago, Kim’s eldest daughter, North, asked her mother to invite the star to their home for a friendly meeting – and so it was done. During the meeting, Lei-Lei posed for a photo with North, then seven years old, and, with the permission of Kim and Kenya, uploaded one ticket starring North. Now, about a year after that meeting, Lei-Lei used the materials she shot in a new clip she released – and received a request from Kim’s staff.

The young rapper removed the video from the network, and wrote that Kim was the one who approached her in person and asked her to remove the video. “Kim texted me to remove the new ticking with North and I do not know why,” she wrote in a post that has since been deleted. “They invited me to their house. It really sucks.” Many raised an eyebrow at the fact that Shekim (40) is in direct contact with a 14-year-old network star, and then Tracy Romulus, KKW’s marketing director, came into the picture.

“I want to make it clear that I am the one who approached Lei-Lei’s father, as a conversation between two adults. Kim never approached this girl,” she wrote. “I’m sorry she did not mediate properly with the girl, but she was invited to Kim’s house a year ago for a game meeting with North – not to have her filmed and appear in the clip a year later. The meeting was held because North adored Lay-lay, and Kim invited her without knowing she Planning to photograph North Kim agreed to have one tick starring North, and only after the meeting did she find out that several were photographed. North is an eight-year-old girl without social media, and it is her parents’ right to decide how and when to use their daughter for marketing purposes, The right of Lei-Lei parents to decide when it comes to their daughter’s image. “