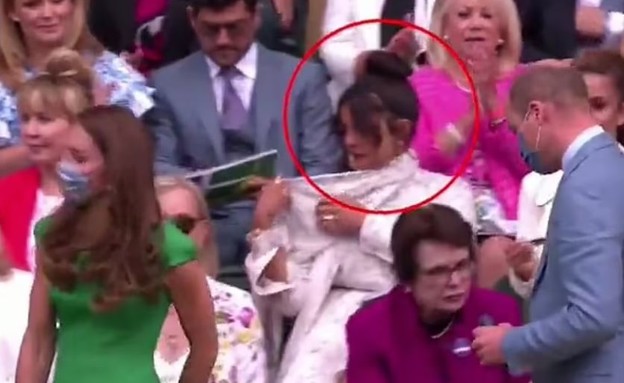 It’s no secret that the relationship between Megan Merkel and Prince Harry, Kate Middleton and Prince William, is not at its peak. The couples quarreled over the departure of Harry and Megan from the royal family, and since then, despite repeated attempts to restore the relationship, the relationship between the couples has collapsed. A new video coming from the realm of a reunion between Megan’s close friend Prince William and Kate Middleton, proves that the conflict has long since crossed the boundaries of couples – and has reached new dimensions.

Megan Merkel’s actress and close friend, Priyanka Chopra, watched the Wimbledon tennis championship from the VIP booth. Prince William and Kate Middleton also attended the coveted tournament, sitting one row away from the actress and her brother-in-law’s close friend. In a video posted by the British Daily Mail it can be seen that Chopra blatantly ignores Prince William and Kate, turning her head to the side and arranging the scarf on her body.

Must be her Meghan loyalty showing.

Priyanka Chopra in the Royal Box at #Wimbledon pic.twitter.com/SZ4f2btc14

When William and Kate entered the field, everyone in the audience applauded them, but from the video they published in the Daily Mail, it appears that Priyanka – chose not to. “Priyanka Chopra did not stand up and applaud William and Kate Bombeldon. Remind me what they did that deserved to be applauded?”