Violon D’Ingres by Man Ray could become the most valuable photograph ever sold at auction. 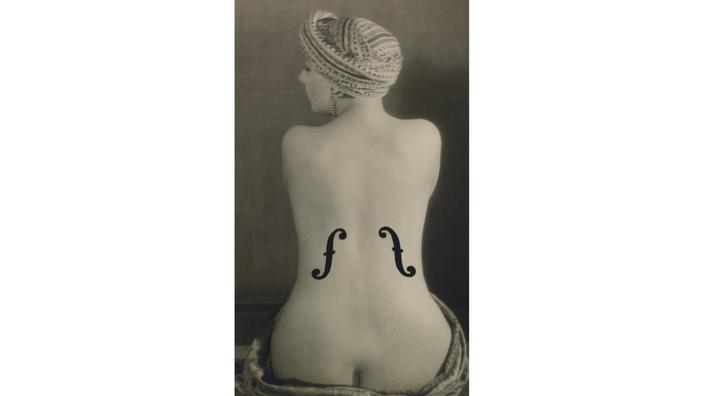 The American artist’s photograph is valued at between 5 and 7 million euros. Rhine II, by German photographer Andreas Gursky, which sold for $4.3 million in 2011, could be dethroned by him.

Ray plays around with the album. Christie’s will auction the most iconic portrait of the American artist, The Violin of Ingres, in New York in May – the exact date has yet to be disclosed. It is expected to sell for between $5 and $7 million, making it the most expensive photographic work ever sold. Andreas Gursky and his rectilinear Rhine II, which sold for $4.3 million in 2011, now hold the title.

The Violin of Ingres will be on display at Christie’s in Paris from March 14 to 22 before going under the hammer in New York.

The black and white snapshot, taken in 1924, immortalizes a woman’s bare body with her back to the camera. This is the back of Alice Ernestine Prin, better known under the pseudonym Kiki de Montparnasse, Man Ray’s muse and companion for five years. The naturalized French artist fused the gills of a violin onto its back in India ink. The photograph was first published in the Dadaist journal Literature, founded by André Breton, Louis Aragon, and Philippe Soupault, in June 1924.

Man Ray, a real lover of Jean-Auguste-Dominique Ingres, drew inspiration from the French painter’s work to create the Violin, which he names after himself. Man Ray establishes a play on words and refers to Ingres’ ambition to be acknowledged not only as a painter, but also as a skilled violinist, his history, by titling the work “violin d’Ingres.” – my preferred period of time

The photographer also pays respect to the nudes of Montauban painter, especially The Bather of Valpinçon (1808) and The Turkish Bath (1859), both of which are housed in the Louvre Museum. Kiki de Montparnasse is seated in the same position as the painter’s models, her head wrapped in a shawl that resembles a bather’s turban.

The Ingres Violin will be on display as part of the collection “The surrealist universe of Rosalind Gersten Jacobs and Melvin Jacobs,” which includes pictures, paintings, sculptures, and jewelry. The sale is expected to be worth more than $20 million in total. Rosalind Gersten Jacobs, a fashion buyer and shop manager in the United States, was introduced to surrealism in 1954 by William Copley, a gallerist, patron, and artist, and his wife Noma, who introduced her to Man Ray. Rosalind’s career as a collector would begin with this encounter, as would her strong associations with artists such as Marcel Duchamp, René Magritte, Max Ernst, and Dorothea Tanning.