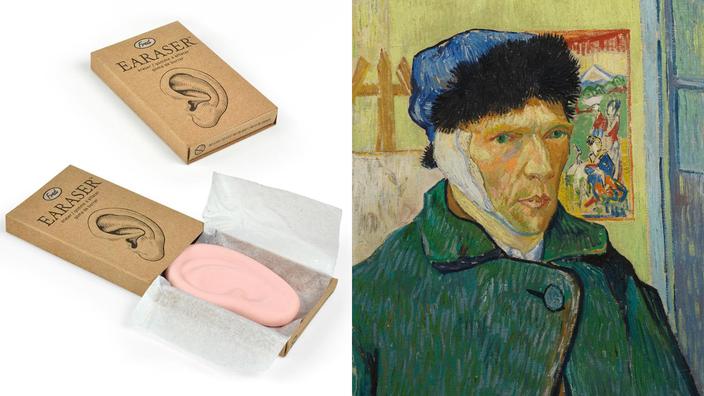 An eraser in the shape of an ear, a first aid kit against suicide… The museum has removed from its shop two objects suspected of making fun of people suffering from mental disorders.

The humor was intended to be comical and absurd, with English sauce. But the ear stuck through their throats and was erased from the museum shop. Let’s rewind. At first glance, the Courtauld Collection Shop, London’s den of Impressionist painting, looks like any other museum shop. Mugs, books, puzzles, tote bags and other accessories flocked with masterpieces from the collection slumber on immaculate repositories. They have been joined, since the beginning of the month, by many Van Gogh products, to accompany the new exhibition devoted to the painter’s self-portraits. Including several audacious objects.

Soap for “tortured artist who loves frothy bubbles” and one “emotional first aid kit” in the shape of a pack of cigarettes are thus part of the lot of exclusive derivative products offered for sale on the sidelines of the Van Gogh exhibition. But the most sulphurous of all was also the smallest. It was an eraser in the shape of an ear, mischievously baptized «Earaser». An English pun on «ear» (ear) and «eraser» (eraser), on which is added the reference to the severed ear of the post-impressionist painter. Designed by the American company Fred, long before the exhibition of the Courtauld collection, the somewhat macabre object might not have been denied by Monty Python. This strange object no longer passes through Her Majesty’s kingdom.

The cut off ear of the shop

“I find it hard to believe that this is not a joke, in very bad taste, that someone from marketing would have indulged in in a pub after work”was indignant on February 13 the English art critic David Lee, for the Daily Mail . Would they do the same for an exhibition Frida Kahlo selling pencils in the shape of a leg?” Curried because of their bad taste, “the ear to be erased” and the other products in the colors of the exhibition were also singled out for their insensitivity towards people suffering from mental disorders. “Suicide is no joke, mental illness is no joke. All this is superficial, odious and disrespectful”was scandalized the contemporary British artist Charles Thomson, also quoted by the Daily Mail.

In response to the controversy, the Courtauld collection removed the sulphurous eraser – as well as the turbulent soap – from its shop on Monday and apologized. “We take mental health very seriouslythe museum said in a statement. It was never the intention of the Courtauld Collection to disrespect and disrespect this important subject by presenting such objects.” No offense to critics who did not hear it that way, the objects in question remain available on the site of the American manufacturer. While waiting for that to be done, in turn, pull the ears.