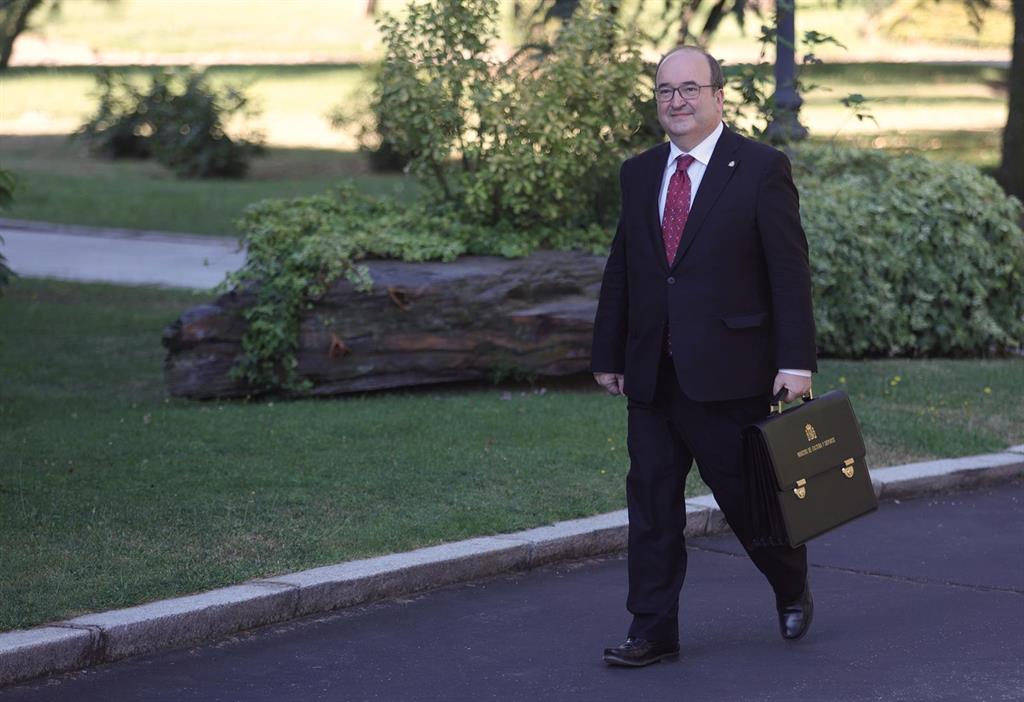 Miquel Iceta the next one will be released Wednesday July 21 as Minister of Culture before the plenary session of Congress, which will debate the validation of the Royal Decree which grants the State guarantee to the Carmen Thyssen collection, as parliamentary sources have indicated to Europa Press.

Iceta has already participated in several official events since taking office last Monday: from the official signing for the participation of Spain as guest of honor at the Frankfurt Fair to the re-election of Gregorio Marañón as president of the Royal Theater, at a meeting of the Board of Trustees.

Next Wednesday will mean the ratification of the guarantee for the collection and, after the announcement by the Council of Ministers to give the green light to the rental agreement last Tuesday, the signature is expected to arrive the following week, according to sources close to the baroness – -the Royal Decree must be validated before by the Congress-.

The Government has assured in the Royal Decree that recognizes the Carmen Thyssen-Bornemisza Collection the State guarantee that the “urgency” in this process it is justified by the risk that the baroness “withdraws” the works, in case an agreement is not reached for its stable exhibition.

As indicated in the text of the Royal Decree collected by Europa Press, the extension for the free loan of the collection –which has been extended in recent years– expired on July 15, “running the risk that the holders of the Collection withdraw the works “, if an agreement is not reached by means of a lease.

“The foregoing highlights the urgent need to articulate the necessary means to ensure, before the expiration of the current extension, that the Spanish Historical Heritage can continue to enjoy, with the necessary guarantees, a set of works of art of the quality and prestige of the Carmen Thyssen-Bornemisza Collection “, says the document.

The Executive describes as “essential to give stability to the presence of the Carmen Thyssen-Bornemisza Collection, as a fundamental element and guarantee of cohesion, unity and quality in the institution”.

And that is why, the “requirement” to guarantee their permanence in Spain, “imposes the adoption of the precise regime to make feasible” the opportunity to incorporate this set of works into the cultural heritage, in a stable manner and with adequate legal security.

The result is this State guarantee that, as the document indicates, will be for 425 works for exhibition in the museum’s permanent collection. The effects of the State guarantee will begin on the date of formalization of the lease, provided that the works are in the Fundación Colección Thyssen-Bornemisza and will last throughout the term of the contract.

In addition, it specifies that if the works that make up the Collection are not available to the Foundation at the time the contract is formalized, the effects of the State guarantee will begin when they are delivered to the Foundation.

Likewise, the initial individual value of the works included in the contract will be the one that appears in the State guarantee application and the list of the works covered, as well as the corresponding individual and total economic value, must be updated annually by Order of the Minister. of Culture and Sports.

The Thyssen-Bornemisza National Museum is already “ready” to exhibit the Carmen Thyssen collection, with a plant enabled for this that will house 180 works and which is awaiting the arrival of the ‘star’ piece in the negotiations in recent months, the ‘Mata Mua’ by Gauguin.

The Carmen Thyssen collection will be on the ground floor of the museum, in the rooms that until now were used for 20th century works. In total, there will be 180 works for eight rooms that will be exhibited “as soon as it can be opened”, as museum sources have explained to Europa Press, who point out that the rooms are “practically assembled, in the absence of any detail” and awaiting the ‘Kill Mua’.

THREE EXTENSIONS FOR THE SIGNATURE

Until today, there have been three extensions to sign this agreement, originally scheduled for last March, and in which the baroness’s son, Borja Thyssen, is also expected to be present.

The agreement was reached on January 29 and contemplated that his collection would remain in Spain for a period of 15 years and with the inclusion of the ‘Mata Mua’ by Paul Gauguin, which left the museum in June of last year. In addition, it would mean the payment of 6.5 million euros per year.