Plácido Domingo ends his return to Spain with ovations, encores and shouts of ‘you are the best’ 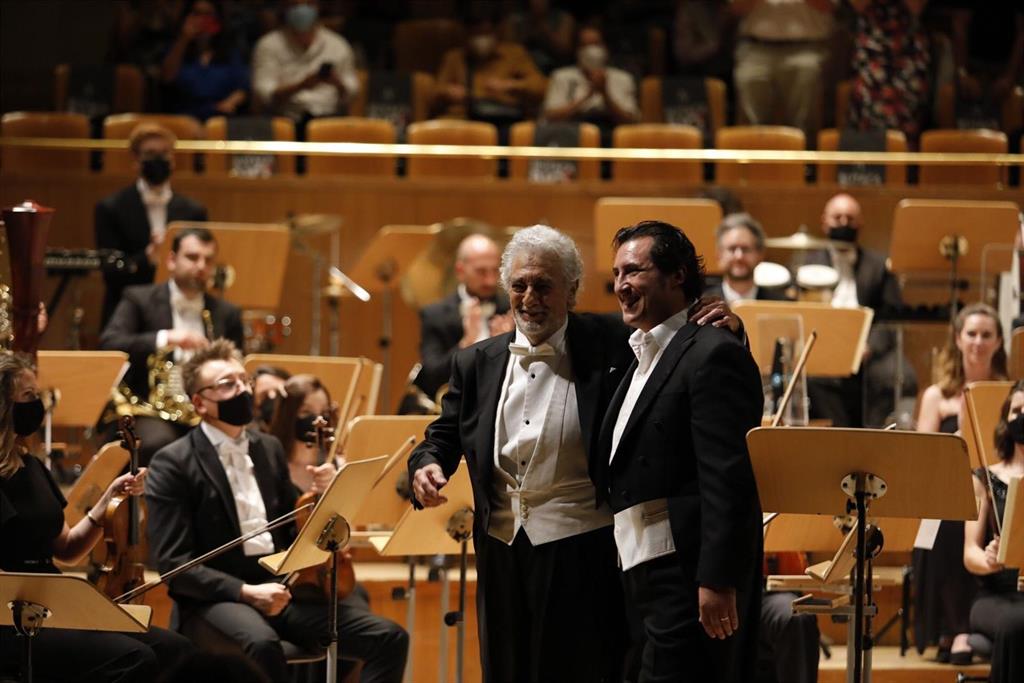 The tenor admits to having finished “very excited”: “I really wanted to be in my Madrid”

The Spanish tenor Plácido Domingo has returned to the Spanish stages this Wednesday, June 9, with a benefit concert at the National Auditorium that began with applause and a thunderous ovation and ended with encores and shouts from the audience, reminding the artist that he is ” the best”.

“It was a unique concert and I think the public will remember it forever. And so will I. I really wanted to sing in my Madrid, my Madrid,” Domingo said at the conclusion of the concert, backstage, in statements collected by Europa Press. The tenor, surrounded by several of the artists from the concert, has acknowledged having “moved” in various parts of the show.

His family members have also shared this emotion, acknowledging that the return to the capital was “a long-awaited moment.” Many people were waiting at the exit of the Auditorium to be able to take a photo or greet the Spanish tenor.

Plácido Domingo’s last performance in Spain was in December 2019 at the Palau de Les Arts in Valencia, where the tenor participated in the opera ‘Nabucco’. Since then, the tenor had not returned to any Spanish stage, with performances canceled in between – the most striking, those related to the Ministry of Culture – and even changes in the name of centers such as the Les Arts Perfection Center itself.

For this return, Domingo had prepared a charity gala, organized by the Excellence Foundation in favor of ‘Red Cross Responds’, in which he has been surrounded by some prominent friends and artists. At 7.30pm, punctually, the prelude to Bizet’s ‘Carmen’ has prepared the atmosphere for the ‘maestro’ to emerge.

The first piece chosen for the repertoire was ‘Nemico della patria’, from the opera ‘Andrea Chénier’, with music by Umberto Giordano. Domingo has appeared on stage in what has been the first of the applause of those who are predictably to come at night.

The people present – a full capacity of 1620 people, the maximum allowed for the Auditorium in the current health situation – have stood up with the appearance of Domingo and between ‘live’ and ‘bravos’ they have given him a standing ovation. almost three minutes. ‘You are the greatest’, they have shouted to the tenor before starting, who has received these expressions of affection visibly moved.

Subsequently, there have been solo interventions by artists such as María José Siri (much applause also for her Adriana Lecouvreur) or Virginia Tola, who have put the female voices to an act without intermission and lasting more than two hours, in a National Auditorium practically full according to the capacity allowed for health reasons.

Plácido Domingo is back with the second act of ‘La Traviata’, the part of ‘Madamigella Valery?’ –a scene performed numerous times by the tenor–, in this case accompanied by Siri herself. A piece by Donizetti (with ‘il cavaliere’ from his comic opera ‘Don Pasquale’, performed by Marina Monzò) has served as a prelude to Verdi’s moment at the concert.

‘YOU ARE THE BEST EVER’

A ‘Simon Boccanegra’ –one of Domingo’s last roles at the Metropolitan in New York– alongside Nicholas Brownlee or an aria by Leonora in ‘La forza del Destino’ that have also raised the public thanks to the interpretation of Ainhoa Arteta have continued with the recital.

Jorge de León and Pablo Sáinz de Villegas have put the counterpoint in the final numbers, where the applause for Lucero Tena’s castanets also resounded. All this, before the zarzuela by the ‘Dúo de la Africana’, with Virginia Tola as ‘La Antonelli’ and Domingo as Giuseppini, which have brought the audience of the National Auditorium to their feet.

It seemed that it was going to conclude as planned, but then the ‘cheers’ began to resonate, and the loud applause, accompanied by resounding phrases such as ‘you are the best in history’. Domingo, who asked his companions to accompany him on stage, has barely been able to articulate an emotional thank you.

‘La morena de mi copla’ (the paso doble by Julio Romero de Torres), ‘La viuda joyful’ with dance included along with Ainhoa ​​Arteta, the ‘Non ti scordar di me’ with various voices and, above all, the well-known one ‘ Bésame mucho ‘that has put the audience on their feet and has accompanied the show on several occasions with clapping hands, they have put the finishing touch to the night.

Before the start of the concert there has also been a loud ovation and applause to the president of the Community of Madrid, Isabel Díaz-Ayuso, who has attended this musical event at the National Auditorium and who has also congratulated the tenor on his return, such as and as Europa Press has learned from sources close to the artist. Other well-known faces have been those of the general director of the Teatro Real, Ignacio García-Belenguer, or the artistic director of the Teatro de la Zarzuela.