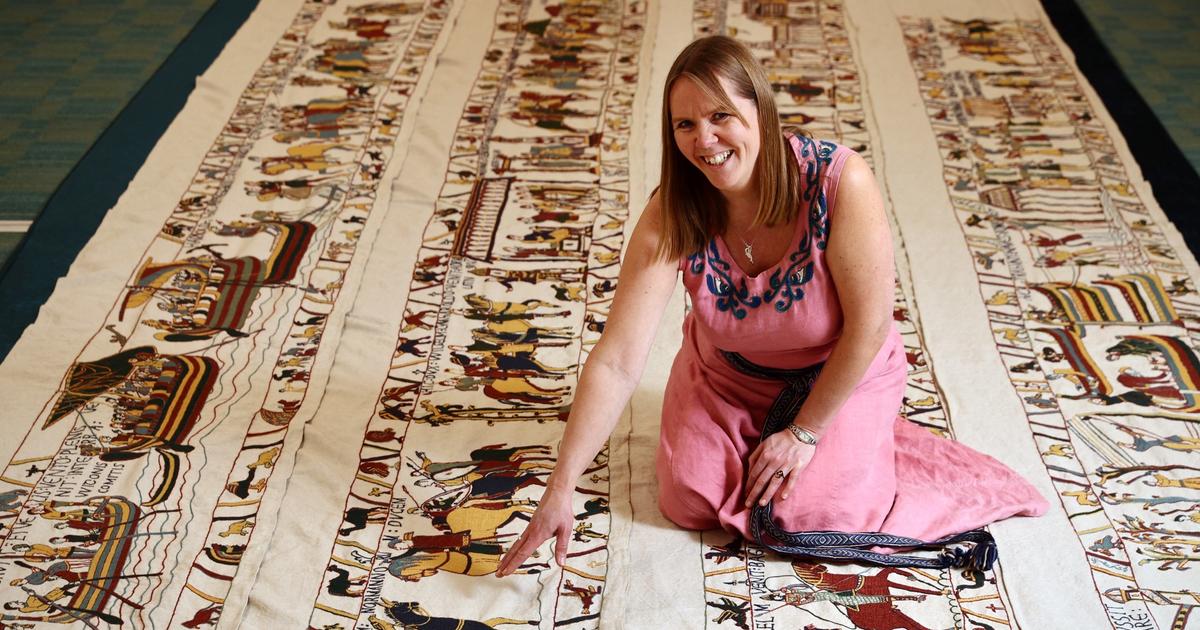 Mia Hansson, a former teacher in the United Kingdom, chose six years ago to embroider a replica of the linen and wool mural depicting William the Conqueror’s invasion of England, a conserved masterpiece in France.

Mia Hansson, who lives in the east of England, embarked on a mad undertaking almost six years ago: to recreate the Bayeux tapestry, a massive mural depicting William the Conqueror’s invasion of England. “I had nothing to do, I was bored, and I wanted a long-term project,” says this enthusiastic 47-year-old Swede who has lived in the United Kingdom for the past 20 years.

This former teacher, who is passionate in embroidery, chose in 2016 to embark on a replica of the most renowned of them all: the Bayeux tapestry, a nearly thousand-year-old masterpiece measuring about 70 meters in length and a symbol of long-standing partnerships. England and the Continent are at odds.

Mia Hansson completed half of the tapestry in mid-January after five and a half years of stitching at a rate of three to four hours per day, which she stores in rolls due to a lack of space to continue. She now knows the tiniest details, right down to the seamstresses’ errors at the time. “She points out that there are four soldiers’ heads but only four legs. “That’s not right,” she says. “You wouldn’t see it if you looked at the original. However, she reproduces these images while being appreciative of art history and this undisputed masterpiece “”Who am I to undo what has been done?” she says of the “oddities.”

Unesco has designated this site as a World Memory Site.

The UNESCO-listed 11th-century tapestry is housed in a museum in Bayeux, Normandy, northwest France, and was most likely designed in Canterbury, southeast England. Although Paris and London have considered a possible loan to the United Kingdom, it will not be transportable until it has undergone extensive restoration, which will begin in autumn 2024 and last at least 18 months.

Mia Hansson was initially hesitant “She was not very interested in the tapestry’s history, but she learnt by embroidering and is now inexhaustible in her knowledge of the 626 individuals shown on the mural. “We have everything on the tapestry. Nothing is ever the same, she continues, whether it’s birds and dragons, camels, horses, ships, or monuments.

Mia Hansson utilizes seven different colored threads to recreate wool needlework on linen. “”If my math is correct, I’ll need 8,000 meters in all,” she estimates. The Swede promises herself five more years in the hopes of finishing her project on July 13, 2027, 11 years after it began. “According to what I know, I’m the first to accomplish it in Europe,” she claims, despite the fact that she is aware of the work of a Canadian who has already created a similar duplicate in ten years.

Mia Hansson is already thinking about the future of her reproduction while she isn’t embroidering to break a record: “I imagine I could sell it.” I’ll be thrilled if someone gives me an offer I can’t refuse».