Almudena Grandes and Ukraine, present in the ‘feminist’ legacy in the Caja de las Letras 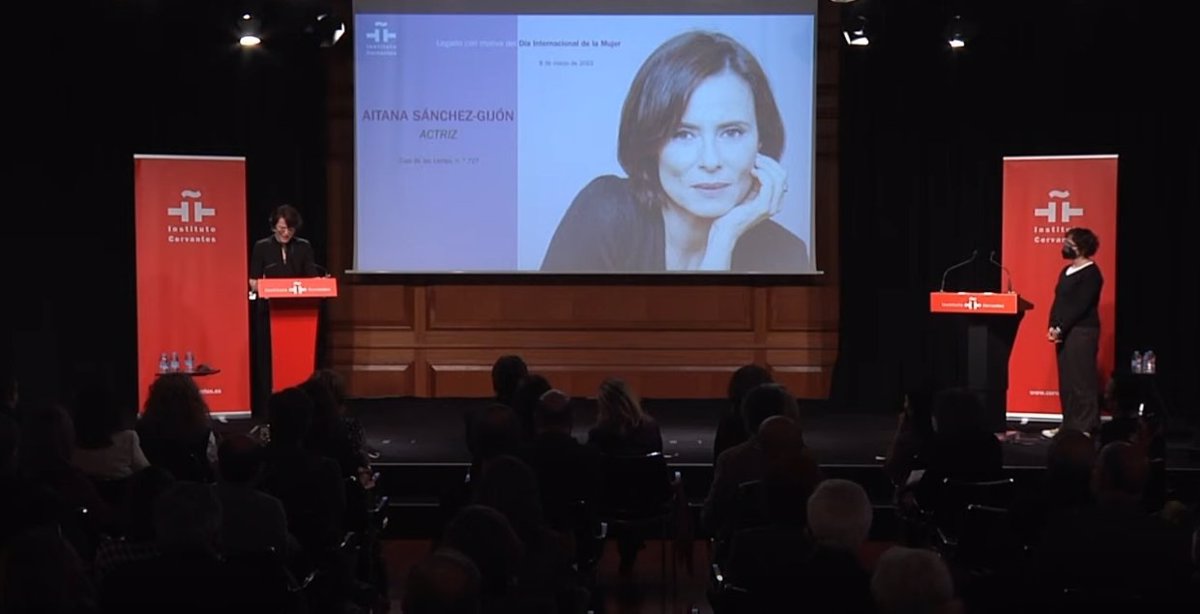 A copy of ‘Blood Wedding’ donated by the multidisciplinary artist Lita Cabellut or a script from one of the performances of Aitana Sanchez-Gijon donated by the artist herself, are some of the objects that have become part of the legacy of the Caja de las Letras of the Cervantes Institute in an act in which the deceased writer Almudena Grandes or Ukrainian women have monopolized part of the limelight.

In the event held at the Madrid headquarters of the Cervantes on the occasion of International Women’s Day, which has had the participation of the First Vice President and Minister of Economic Affairs and Digital Transformation, Nadia Calvin nine legacies of relevant women of culture have been deposited.

The minister, who has acknowledged that is experiencing “such intense, hard and sad moments”, he has described the act as “exciting”also emphasizing the importance of gender equality.

“We are talking about prosperity and development, about a healthy society and also about fair, prosperous and inclusive growth. It is a day to be proud of, because Spain leads this area, which has been one of the main engines of progress”, Calviño pointed out.

The Caja de las Letras has received two books, handwritten poems and a butterfly pendant from the writer Gioconda Belli. The author has explained that, in a certain way, it is a “legacy promise”, since last June she left Nicaragua “because of the state of persecution in the country” and he has not been able to return. Among his deposit, very old copies of García Márquez or Cortázar and his most recent poem, ‘Despatriada’.

Belli has closed his intervention with a dedication to the writer Almudena Grandes, who has led together with her husband, the director of the Cervantes, Luis García Montero, to “a generation that fought against the invisibility of women”.

Meanwhile, Lita Cabellut has delivered a copy of ‘Bodas de sangre’ illustrated by her, in a two-part case that houses this 120-page art book inside. “These boxes are full of dreams, of people who dare to dream and that is something so important in these historical moments. We must not forget the relevance of art now that we are experiencing all this,” said Cabellut, who dedicated the event to “all women” in Ukraine.

The legacy of Cristina Iglesias has consisted of a 1547 edition in Basque by Martin Hoyazabal as a litany that sings the coordinates to travel to Newfoundland for Basque fishermen, as well as five engravings that make up his sculptural work installed next to the Basque Parliament.

Several records signed by the bailaora Carmen Linares -among them, the only anthology that collects all the songs created by women in flamenco-, a stage dress and shoes, photos and a memory of her childhood have also been added to the Letter Box. “We contribute our grain of sand to achieve equality with capital letters“, he pointed out.

Likewise, a t-shirt worn by the Colombian poet José Asunción Silva on his first day of life, bequeathed to the family of Laura Restrepo and which she has ceded, has also ended up in this deposit of the Cervantes Institute.

Maruja Torres has left for her friends Terenci Moix and Manuel Vazquez Montalban –“two men who made me the way i am“, has defended– two copies of ‘The weight of the straw’ and ‘Los Mares del Sur’, respectively. In addition, a copy of one of his works that he dedicated to these two writers, ‘Esperadme en el cielo’.

“They, like me, are born while there was a world war. Today I don’t know whether to be glad that they are not here, so that they are not seeing what is happening with human nature“, he lamented in reference to the war conflict. He has also dedicated the act to “Almudena (Grandes), the one who was not a virgin, the writer, ours”.

Aitana Sanchez-Gijon he has bequeathed a book by Rafael Alberti, ‘El hombre deshabitado’, which was one of his first theatrical productions, as well as a necklace that he wore in ‘A wild god’ and the libretto for one of his performances. “We all had Almudena in our thoughts and in our hearts“, The actress has recognized when delivering her legacy, remembering one of the poems read during the act by García Montero.

Sánchez-Gijón has also had words for the invasion of Ukraine. “I am the daughter of an exile. There is a thread that unites me to the sufferings of war and exile at a time like this, so this takes on a very important meaning for me“, he pointed out, to read below a poem by Miguel Hernández.

Finally, the scientific Maria Vallet-Regí has deposited two scientific works, three offprints and “a surprise”. “After the pandemic, society has realized how important science is so that we can live better,” it is finished.