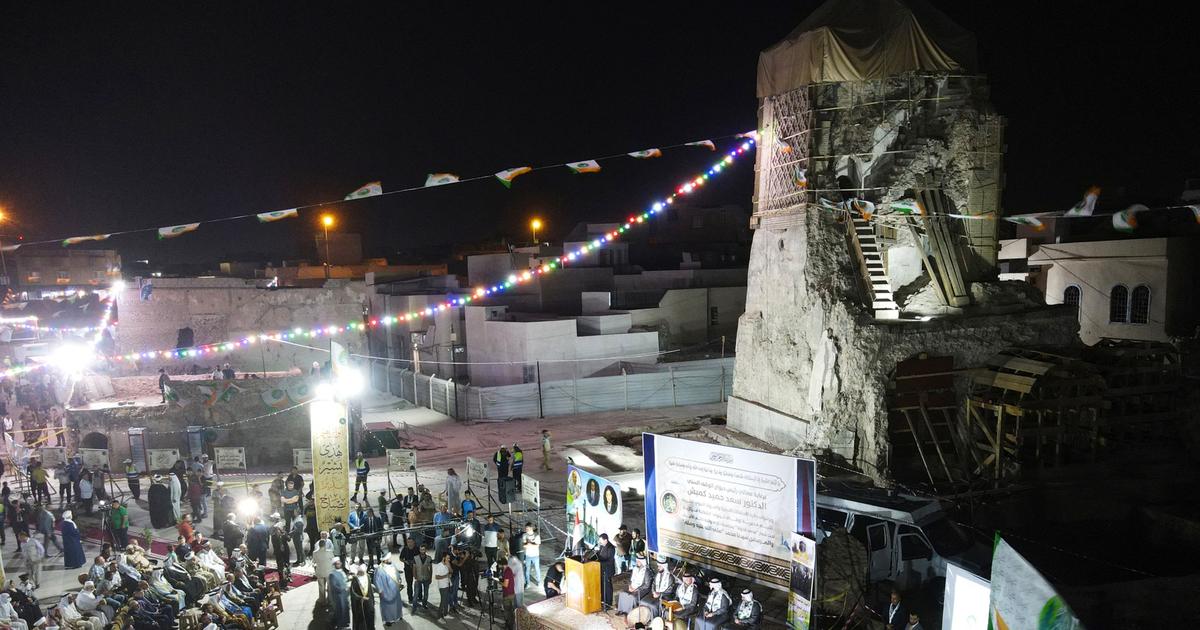 Workers are laboring at the foot of a 12th century minaret, surrounded by bricks and alabaster that had been spared from extremist destruction. Mosques, churches, and centuries-old residences are being reconstructed to revitalize the old city of Mosul, a metropolis in northern Iraq.

The area, with its meandering lanes, was the last stronghold where Islamic State (IS) fighters had retreated, providing intense resistance to Iraqi forces who had retaken the city in the summer of 2017. Several projects are underway, supported in part by the United Arab Emirates and the European Union, thanks to Unesco and his initiative Bringing back the soul of Mosul.

Only the base of an 850-year-old leaning minaret, dubbed Al-Hadba, survives on the esplanade of the al-Nouri mosque. A tarpaulin was placed over the hunchback. “Al-Hadba is the icon of Mosul,” says Omar Taqa, a Unesco engineer in charge of the project. “Everyone wishes to see the minaret in its original state.” In June 2017, the Iraqi army demolished the site, accusing militants of planting explosives there. Only the center part of the mosque, which is crowned with a dome and is supported by wooden wedges, has remained. Blue hints emphasize the interlacing of the capitals that adorn the gray marble columns. “We discovered 11 mines that were ready to be detonated,” the engineer recalls. “There are those hidden within the walls.”

The rebuilding of the minaret, which will continue leaning, will begin in mid-March after clearing 5,600 tons of rubble. The mosque’s construction will then begin this summer. By the end of 2023, the site should be restored.

The most fragile relics are housed in a storehouse while they await a similar rebuild. There are pieces of a Mihrab, a niche that indicates Mecca’s orientation. But also pieces of a Minbar, a pulpit for preaching, which the former EI commander ascended to proclaim his caliphate in 2014. On shelves, terracotta bricks are stacked. According to Omar Taqa, 45,000 of the original minaret construction will be reused.

The site is still full of surprises. Authorities revealed in January that a 12th-century prayer hall had been unearthed underneath. Unesco raised a total of 110 million dollars. In addition to Al-Nouri, two churches, Al-Tahira and Notre-Dame de l’Heure, are under construction, each with a hundred residences and a neighborhood school.

According to the UN agency, the sites, which were entrusted to local enterprises, have resulted in the creation of 3,100 employment, half of which are held by young people who have received training in heritage and building restoration skills. Azhar used to sell fruit from a cart in the old town. He is presently employed as a construction worker at the Al-Nouri facility. “Houses, streets, and people were transferred to camps,” says the father of five children, who is 48 years old. “Everyone has been harmed. There are individuals who have lost loved ones, as well as their homes, businesses, and automobiles. He refuses to speak of his deceased wife, a wound that is still open, despite his companions’ pleas.

Normalcy has reclaimed its rights, despite half-collapsed buildings. Cafes, bakeries, and workshops have reopened. Two women choose tomatoes and beans from the greengrocer near the curve of an alley, just a few steps away from a cement mixer surrounded by busy workers. Houses are being built in lane after alley. Some are between the ages of 100 and 150. Elegant alabaster facades sculpted with Ottoman-inspired designs may be found across the maze of terraces and interior courtyards. “There are 44 housing units that are almost ready, and they will be delivered at the end of March,” says engineer Mostafa Nadhim to AFP. By the end of the year, another 75 will be rebuilt. The project comprises infrastructure renovation, including “electrical lines, lampposts, water pipes, and roadway pavement,” according to Mostafa Nadhim.

Ikhlas Salim returned to her house a few months ago. The structure was completely demolished after the war. The restoration had a “therapeutic” impact. The 55-year-old woman responds, “It’s the grandparents’ place.” “We had given all hope of ever returning.” The linen, put out on a line in the courtyard, dries in the sun. Ikhlas is preparing beans for his two sons, who will be returning home for lunch during the midday break. They had been working on building sites in the area all morning.