The excavations of the Holy Sepulcher coordinated by Sapienza are underway 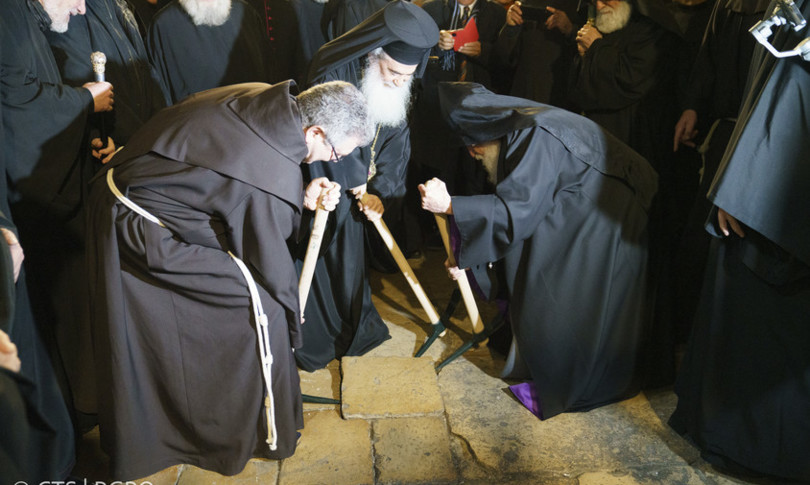 The archaeological excavation activities coordinated by the Department of Ancient Sciences of Sapienza began this morning with the ceremony for the removal of the first stone of the floor of the Basilica of the Holy Sepulcher in Jerusalem.

It is a particularly complex excavation, which it will take place continuously for over two and a half yearsduring the night and during the day, without interruptions, to allow the regular performance of religious services and not to impede the flow of pilgrims.

During the excavation, the avant-garde methodologies will be combined with the needs of guaranteeing the rapid development of the works and preserving the multifunctionality of the spaces: this difficult context has in fact required particularly careful preparation, over the last few months, not only from one point scientific and technical, but also motivational and psychological, obtained thanks to the availability of the University teachers.

For the first time it will be possible to archaeologically investigate a monument unique in the world – never subject to systematic excavations – which contains events of the highest historical and symbolic value and an intense archaeological stratification, which links East and West.

“The activity of the researchers of our University in one of the most sacred places for Christians and of great historical and artistic importance is a source of pride – says the rector Antonella Polimeni – and confirms Sapienza’s primacy at an international level also in the humanities”.

“We are particularly honored and proud to make the skills of our archaeologists available” – adds Giorgio Piras, director of the Department of Ancient Sciences – “for an enterprise of great scientific and historical importance which sees a wide collaboration of many Sapienza researchers “.

The restoration operations were instead entrusted to the La Venaria Reale Conservation and Restoration Center Foundation in Turin. During the pandemic period, work continued with the preparation of tools aimed at making field work more efficient and quicker, with the creation of a database on the basilica and its history which collected all the data – edited and largely also unpublished – ed it is intended to accommodate information from field investigations; at the same time, solutions were studied to make the documentation of the artifacts more effective and faster. Coordination and preparation missions for archaeological activities were carried out in Jerusalem, for which the Department obtained an excavation license from the Israeli authorities.