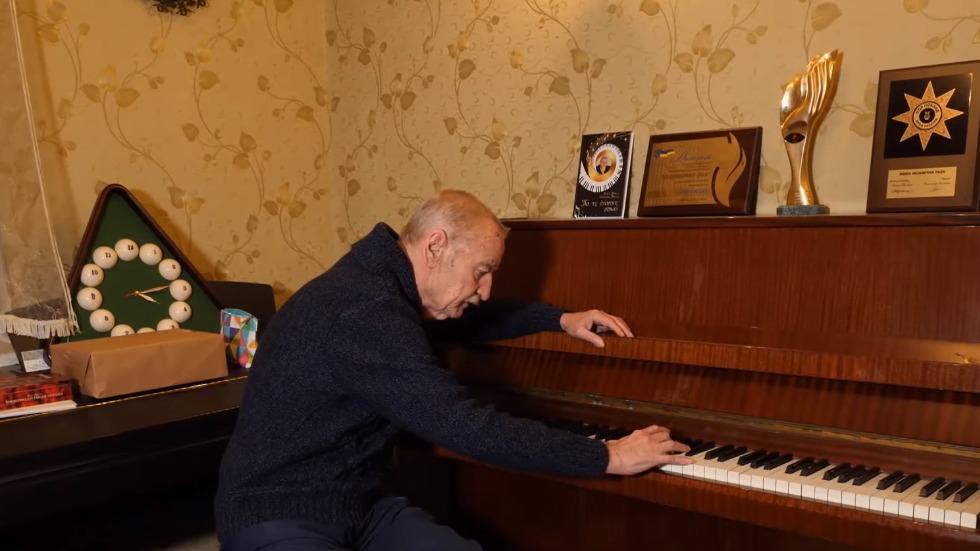 Decorated in December by President Volodymyr Zelensky, the 80-year-old popular musician had been trapped with his wife in the northwest of the capital. He was saved thanks to alerts launched by a journalist on Facebook.

The acclaimed musician was more used to thunderous applause than bomb storms. Elevated to the rank of Hero of Ukraine by President Volodymyr Zelensky in December, composer Igor Poklad was evacuated, together with his wife Svetlana, from the kyiv region in mid-March, several weeks after the start of the partial siege of the capital. The happy ending follows a warning cry launched on Facebook by a journalist, when all contact with this major figure in contemporary Ukrainian music had been broken following the advance of Russian troops.

Read alsoJulia Sinkevych: “Faced with the barbaric invasion of Ukraine, the cultural world must help us”

Isolated in their village of Vorzel, located in the occupied northwestern part of kyiv, the couple had holed up in their house as fighting raged around it. Since the end of February, the neighboring commune of Irpin has been on the front line, trapping civilians still there and cutting them off from any direct link with the rest of the world. A situation which, day after day, worried more and more the journalist and presenter Dmitry Gordon, who had interviewed Igor Poklad in 2015. “We must save the legend and the pride of Ukraine!”he had alerted on March 9 on Facebook, indicating the precarious position of the composer and his wife, forced to take refuge in their cellar, without water or food.

Saved by a volunteer

The appeal has been heard. The couple, as well as their two dogs, were joined and evacuated by car, the following days, by the action of Kostyantyn, a volunteer. “Two weeks spent under mortar explosions and hail, without light and without water. The family survived a scary time and went through hell on the dangerous path they tookwas moved, on March 12 on Facebook, the former Ukrainian Minister of Culture Yevhen Nyshchuk. Artists are made to create and not to undergo such an ordeal!”. The politician said he was able to meet Igor Poklad since his evacuation, ensuring with his own eyes that the leading composer of Ukraine was safe and sound.

Since the invasion of Ukraine by the Russian armed forces on February 24, many ensembles and artists have been welcomed abroad, especially those who were already on tour, such as the kyiv City Ballet or the Grand Ballet of kyiv. Others stayed, by choice or by compulsion – men between 18 and 60 years old being prohibited from leaving the country. In kyiv, several artists have thus, for example, found refuge in the Voloshyn art gallery.

The work of Igor Poklad was celebrated with great pomp in Ukraine last December, on the occasion of his 80e birthday. A canonical age that prompted the government to award the composer the highest official decorations. These are not the first obtained by the musician. Born in 1941 in Kyrgyzstan, then in the USSR, the 1986 winner of the Shevchenko Prize and creator of operettas is at the origin of many popular tunes of post-war Ukraine. Songs interpreted by figures of the Soviet variety, such as Muslim Magomayev, Tamara Miansarova and Nina Matvienko, or the Ukrainian star Ruslana. The composer is also the author of many film scores of the 1970s-1980s, the themes and motifs of which have remained popular until today. And who form part of this Ukrainian culture doomed to the loathings of Russian power.