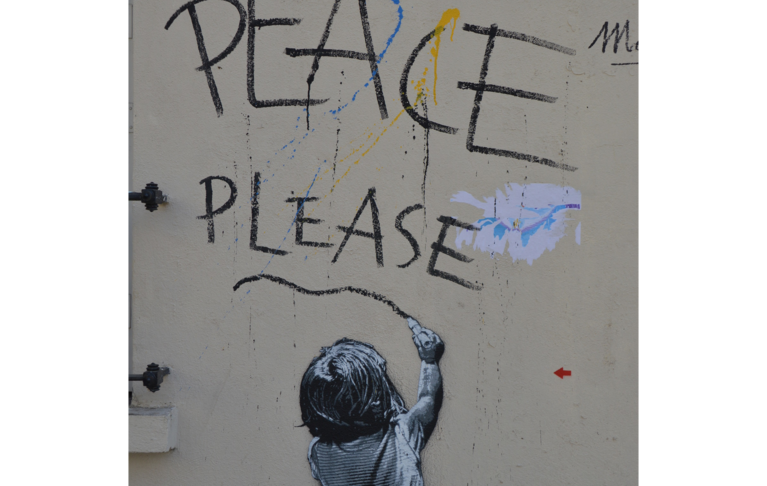 One month after the invasion of Ukraine by Russia, demonstrations of support for the Ukrainian people and those for peace have multiplied throughout Europe and have taken different forms. It also happened in France, where the world of art was involved among others. In Paris, street artists covered the walls of some neighborhoods with works of denunciation of Putin’s military policy and the war. In particular, the streets of Buttes Aux Cailles, a stronghold of street art in the French capital located in the 13th arrondissement, have become the site of an open-air exhibition.

On the rue Buot, Julien Malland alias Seth Globepainter – who stayed in Donbass during the conflict in 2014, thus having the opportunity to meet many Ukrainian children – painted a girl holding the Ukrainian flag and marching proudly over the tanks, almost to recall the Marianna of the famous painting Freedom leading the people by Eugène Delacroix. “I wanted to represent the courage of the Ukrainians in the face of the Russian invasion. I don’t usually speak out on topical issues, but I know how important it is for people living in this dramatic situation to know that we think about them, ”Malland told HuffPost Us.

Not far away, on the sides of the street from which the neighborhood takes its name, there are three other murals. Kelu Abstract painted a blindfolded young man intent on screaming on a yellow and blue background, accompanying the work with the words “fight for your rights”.

His colleague Jeff Aérosol instead drew a little girl sitting, intent on writing “peace please” on the walland a Ukrainian boy ready to flee his land, holding a suitcase in one hand and a teddy bear in the other.

Leaving Butte Aux Cailles but remaining in the thirteenth arrondissement, in boulevard Vincent Auriol you can admire the fresco by the artist Djoulaylapapaye “for peace, for Ukraine, for life, for the future, for women, for the innocent ”Representing two female figures – symbol of the nations at war – one next to the other, one of which in the act of crying.

On the corner of rue Domremy and Patay, however, on the facade of a residential building, Christian Guémy, aka C215, drew an anonymous girl with a wreath on her head along four floors, a symbol of the Slavic countries. Below, the artist added a quote from Ukrainian President Volodymyr Zelensky in the original language: “I don’t want my photos in your office, really, because I’m neither a god nor an icon, but a servant of the nation. Instead, hang up the photos of your children and look at them every time you make a decision ”.