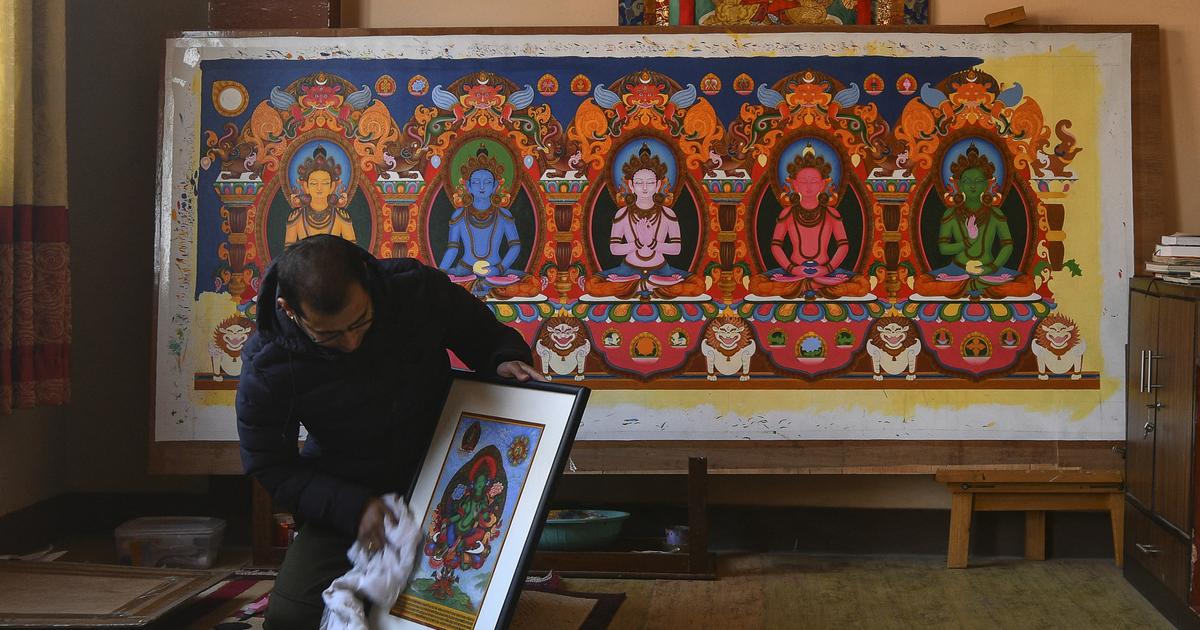 After going through ancestral rituals to purify it, Ujay Bajracharya meticulously recreated with a brush, for three months, the religious image of Green Tara, goddess of compassion.

Shaved head and empty belly, the Nepalese artist Ujay Bajracharya draws with a brush the eyes of the goddess Tara, venerated by Buddhists and Hindus, completing his work in Paubha style, the national sacred pictorial art that he intends to invigorate.

The 40-year-old painter applied himself for three months to bringing to light his vision of the Green Tara, goddess of compassion, in the rules of this ancient art characterized by its religious imagery, meticulousness and abundance of detail. as well as color intensity. Its practice traditionally requires the performance of ancestral rituals of purification. Also, before getting to work, the artist had to shave his head and cut his fingernails short.

A Buddhist priest has blessed his canvas and chosen the most auspicious auspicious day to give birth to his painting. Then Ujay Bajracharya was able to get to work, starting to paint early, fasting all day and, in the evening, eating a strictly vegetarian meal from which garlic, tomatoes and onions are banned. «My body becomes lighter, I feel a greater concentration and motivation to paint» thanks to this regime, he told AFP. “Changing my lifestyle was a bit difficult at first, but my family and friends supported me and helped me maintain discipline”, he adds. While the practice of Paubha remains common in Nepal, on the other hand, the rituals and asceticism that once accompanied it tend to disappear.

Ujay Bajracharya began conforming to the traditional spirit and rites of the Paubha last year so that the Nepalese Art Museum in Kathmandu, the capital, commissioned the creation of a painting he proposed. According to Rajan Shakya, founder of the museum, the idea of ​​fully reviving this art, with its rituals of asceticism, immediately appealed to him. “This is what makes Paubha art unique and valuable”by Rajan Shakya to the AFP, “the more people find out about it, the more demand there will be for Nepali artists”. “Thus we are sure that our art will survive, that our culture will survive”he believes.

Ujay Bajracharya’s Green Tara is a personal work, intended for the prayer room of his home, with which he prepared to create the piece intended for the museum.“We must preserve this practice and make the next generation aware of it (…) to make known the spiritual dimension of this painting”, emphasizes the artist. Paubha works are traditionally painted on cotton or silk canvas, with natural pigments extracted from minerals and plants. Some works in the past could even be adorned with pure gold and silver. The oldest surviving Paubha painting dates from the 13th century but experts believe the practice to be older. She would be at the origin of Thangka, religious pictorial art of neighboring Tibet, classified as intangible cultural heritage by Unesco.

According to priest Dipak Bajracharya, a member of the same caste as the painter but unrelated, the masters of the Paubha were to remain “pure” in order to guarantee the sanctity of their icons. “The process itself is a form of meditation”, he explains. While the traditional religious significance remains, Paubha-style works painted today are enjoying increasing international success and are acquired by museums and wealthy collectors in China, Japan and the West. “The Paubha works now feed a trade, but their (original) aim is not commercial, they are in fact objects of veneration and worship”recalls Dipak Bajracharya.

At the painter’s home, whose hair has grown back, the priest returned for a final religious ceremony to“breathe life” to the representation of her Green Tara now completed and allow the goddess to truly incarnate herself there, thus calling for her veneration. “It’s not just art, the faith of Buddhists and Hindus is attached to it”assures the painter, “If we don’t preserve this art form, faith too will slowly die out.»