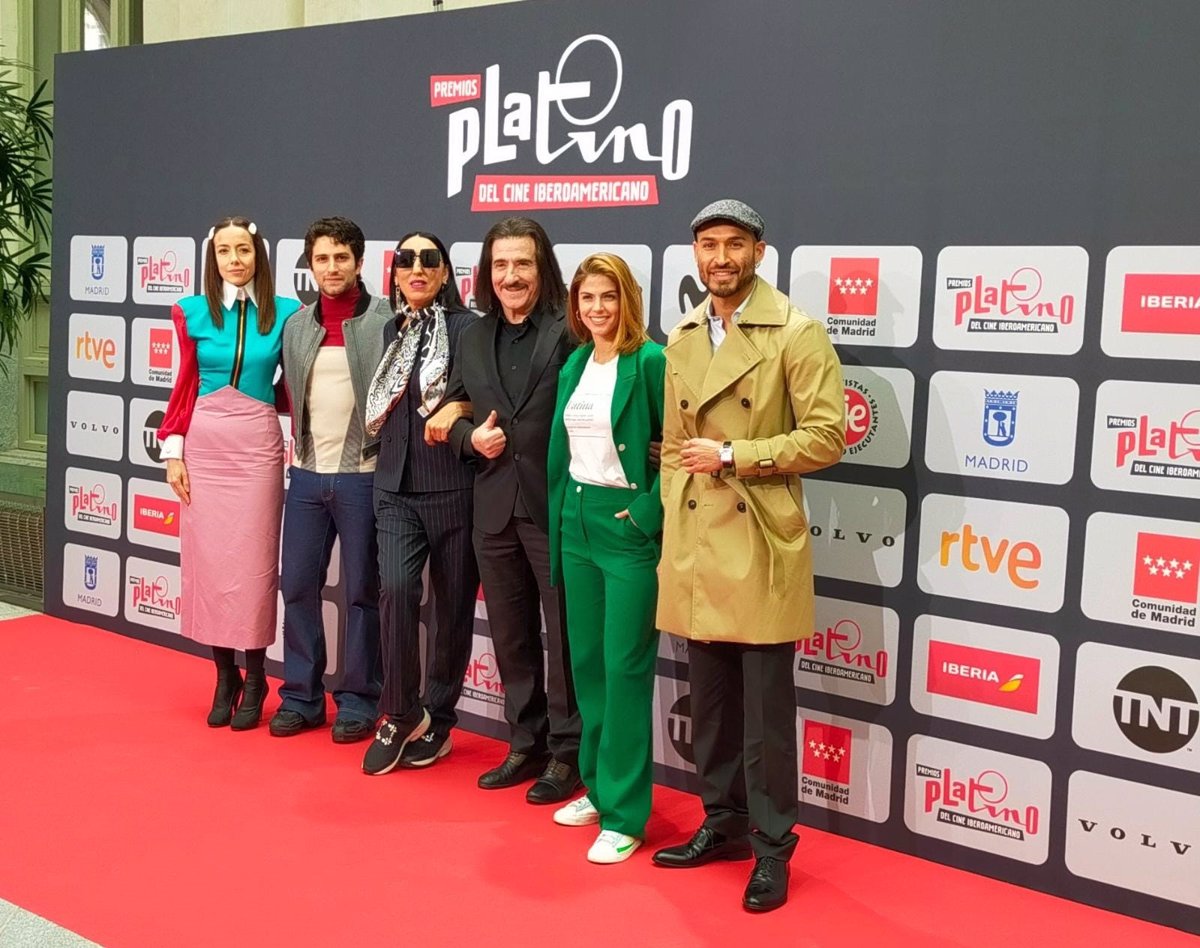 There are nominations from eleven different countries, with Spain, Mexico, Argentina, Brazil and Colombia with the most nominations

The film ‘The good boss’ and the series ‘The kingdom’ lead the nominations of the IX Edition of the Platinum Awards for Ibero-American Cinema and Audiovisual. Specifically, the Spanish film directed by Fernando León de Aranoa begins with 11 nominations, while, in the television section, the Argentine series ‘The Kingdom’ has obtained six nominations.

The winners will be announced at a gala to be held next May 1 in Madrid and that will be broadcast on television channels throughout Latin America, as announced this Thursday at the reading of nominations, at the Madrid City Council, carried out by Daniel Guzmán, Darío Yazbek, Edgar Vittorino, Luis Cobos, Rossy De Palma and Stephanie Cayo.

Thus, the work with the most nominations in the television section is the Argentine series ‘The kingdom’followed by the Spanish ‘Iron‘, with 3 candidates. For their part, the film productions with the most options for awards are Spanish ‘The good boss’with 11 nominations; ‘Maixabel‘, with 8, and ‘Parallel mothers’with 7.

In the case of the category for Best Ibero-American Cinematographic Fiction or Documentary Miniseries or Teleseries, the list of finalists is made up of Argentina ‘The kingdom’, by Marcelo Piñeyro and Claudia Piñeiro; the Chilean ‘Isabel‘, by Rodrigo Bazaes; and the mexicans ‘Luis Miguel: The series’by Daniel Krauze, and ‘Narcos: Mexico’by Carlo Bernard, Chris Brancato and Doug Miro.

Meanwhile, the nominees for Best Direction are, precisely, the directors of the nominated films: Fernando Leon de Aranoa for ‘The good boss’, Iciar Bollain by ‘Maixabel’, Pedro Almodovar for ‘Parallel Mothers’ and Tatiana Huezo for ‘Night of Fire’.

The finalist actresses in the category of Best Female Performance are the Spanish Angela Molina for the Paraguayan film ‘Charlotte’, White Portillo by ‘Maixabel’, the Mexican Ilse Salas for the Panamanian film ‘Plaza Catedral’ and Penelope Cruz for ‘Parallel Mothers’, a role that earned him a nomination at the 94th Oscar Awards and the Volpi Cup at the Venice Film Festival.

For their part, the candidates for Best Male Performance are Eduard Fernández for the Spanish film ‘Mediterráneo’, Javier Bardem for ‘The good boss’, louis tosar by ‘Maixabel’ and the Brazilian Rodrigo Santoro by ‘7 Prisoners’.

For the awards for Best Male Performance in a Supporting Role and Best Female Performance in a Supporting Role, the Chilean Alfredo Castro for the Argentine film ‘Karnawal’, Christian Malheiros by ‘7 Prisoners’, Manolo Solo for ‘The good boss’ and Urko Olazabal by ‘Maixabel’ in the masculine part, and Aitana Sanchez-Gijon for ‘Parallel Mothers’, Almudena Love for ‘The good boss’, Ana Cristina Ordonez Gonzalez for ‘Night of Fire’ and Milena Smit for ‘Parallel Mothers’ in the female section.

In the case of the nomination for Best Creator in a Miniseries or TV Series, the Alejandro Amenabar for ‘Fortune’ John Joseph Campanella for ‘The Envoys’, Macelo Piñeyro and Claudia Piñeiro for ‘The Kingdom’ and Pepe Chur for ‘Iron’.

In the category for Best Supporting Male Performance in a Miniseries or TV Series, they opt for the Platinum Award Albert Saint John for ‘Kings of the night’, Enric Auquer for ‘Perfect Life’, Joaquín Furriel for ‘The Kingdom’ and Karra Elejalde for ‘La fortuna’, while for Best Supporting Female Performance in a Miniseries or TV Series Mary Pujalte for ‘Come on John’, Najwa Nimri for ‘The paper house’, Nancy Duplaa for ‘The Kingdom’ and Rosa Maria Bianchi for ‘Monarch’.

In the section for Best Documentary Film, the candidates are ‘100 days with the Tata’by Miguel Ángel Muñoz, precisely who will host the Platino Awards gala together with Argentine actress and singer Lali Espósito; ‘The Last Forest’by Luiz Bolognesi; ‘Who prevents it’by Jonás Trueba, and ‘Rita Moreno: Just a Girl Who Decided to Go for It’by Mariem Pérez Riera.

For its part, for the Platinum Award for Best Ibero-American Opera Prima, which recognizes the commitment of producers to new talents in the Ibero-American industry, they choose ‘Clara Alone’, by Nathalie Álvarez Mesén; ‘Carnival‘, by Juan Pablo Felix; ‘Liberty‘, by Clara Roquet, and ‘No particular signs’by Fernanda Valadez.

In the recognition for Best Screenplay, Abner Benaim opts for the award for ‘Plaza Catedral’, and will have as category rivals Fernando León de Aranoa for ‘El Buen Patrón’, Henrique Dos Santos and Aly Muritiba for ‘Deserto Particular’ and Icíar Bollaín and Isa Campo for ‘Maixabel’.

Meanwhile, the nominees in the Best Original Music section are Alberto Iglesias for ‘Mothers Parallels’, a composition that also earned him a nomination for the 94th Oscar Awards; César López for ‘Memoria’, Kenji Kishi Leopo for ‘The Wolves’ and Zeltia Montes for ‘The Good Boss’. In the candidacy for Best Art Direction, they will apply for ‘The good boss’, ‘The devil between the legs’, ‘Parallel mothers’ and ‘Memory’.

Regarding the other technical nominations, ‘7 Prisioneiros’, ‘El Buen Patron’, ‘Los Lobos’ and ‘Maixabel’ will compete for the recognition of Best Editing Direction, while the Platinum Award for Best Direction of Photography will be chosen by ‘ Clara Sola’, ‘The good boss’, ‘Mediterranean’ and ‘Memory’. For their part, ‘7 Prisioneiros’, ‘El Buen Patron’, ‘Memoria’ and ‘Plaza Catedral’ are the candidates for the award for Best Sound Direction.

The contenders for recognition as Best Animated Film are ‘Ainbo, the Amazon Warrior’ by José Zelada and Richard Claus; ‘Bob Cuspe: We don’t like people’ by Cesar Cabral; ‘Save the tree (Zutik!)’ by Haizea Pastor and Iker Álvarez and ‘Valentina’ by Chelo Loureiro. Finally, the nominees for the Platinum Award for Cinema and Values ​​Education are ‘Los lobos’, by Samuel Kishi; ‘Maixabel’, by Icíar Bollaín; ‘Mediterranean’, by Marcel Barrena, and ‘I’m a girl, I’m a princess’, by Federico Palazzo.

A jury made up of 135 members from 22 countries has participated in the election of the nominated audiovisual works so that no territory can decide the voting process in any way. The ninth edition of the awards has nominations from eleven different countries, with Spain, Mexico, Argentina, Brazil and Colombia being the countries with the most nominations.

It will be from now on when the jury, together with the filmmakers and creators of the pre-selected films from previous editions, will choose the 22 winners (and a Platinum Honor Award) in awards that have been working since their first edition, in 2014, in the dissemination of Ibero-American cinema.