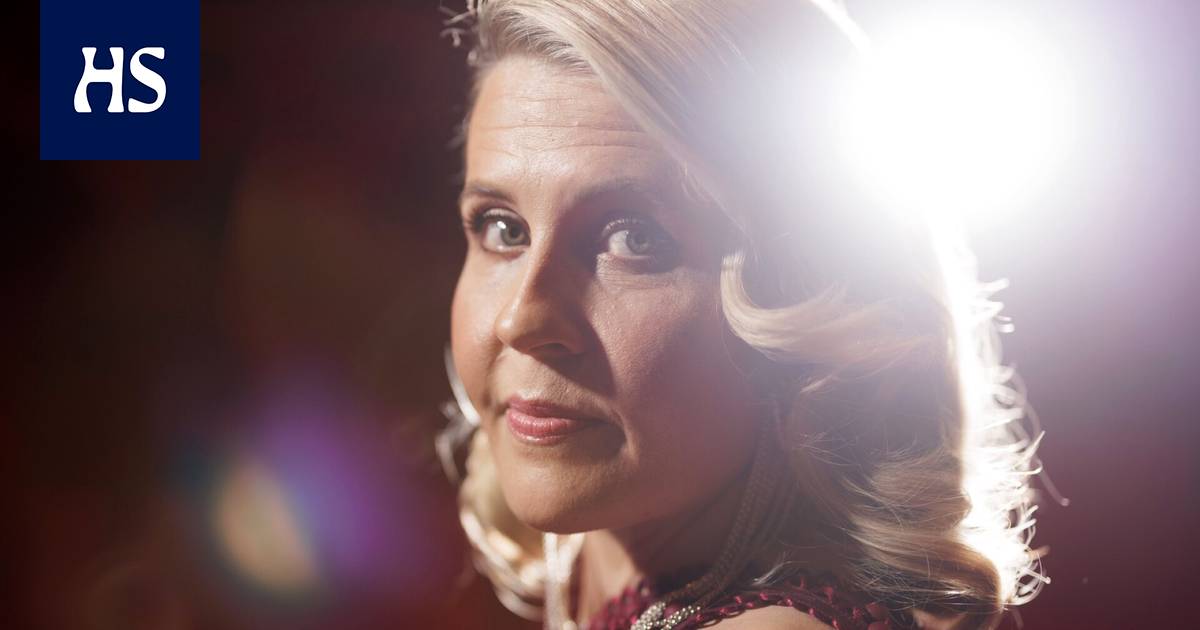 Mollberg, Kaurismäki, Karukoski. Movie directors have been used to talk about surnames. To this day, the majority of them have been men. Slowly but surely, however, the world is changing. Now we also have Haapasalo. Her latest film is about girls.

Movie Director: a really rare profession. Making movies is so expensive and time consuming that you really can’t make them.

When someone has, contrary to all probabilities, become a film director, curiosity arises.

Could the future profession have been predicted as early as that person’s childhood?

How are you, film director Haapasalo?

“If anyone had ever considered it possible for someone to become a film director, I might have been told that they’re directing all the time. I was the guy who started handling the show when the cousins ​​came to grandma, I actually directed it. I controlled the games and at least tried to guide the little brother to act in them the way I wanted. I also directed the choir in primary school. ”

Sitting in a café in the backyard worker Alli Haapasalo smiles as he shows how he moved the bar in front of the choir:

“I waved my hand without knowing anything.”

The image from decades ago, from Kerava in the 1980s, is wonderful.

It’s wonderful too Haapasalo’s new film, which will have its Finnish premiere on Thursday, April 14 Girls girls girls.

The United States also seemed to agree at the Sundance Film Festival, where the Haapasalo film won an audience award.

Not only wonderful, it is Girls girls girls also empowering and important.

They live in Helsinki, go to school, do little work, party on Fridays. Emma figure skates and aspires to the European Championships, Rönkkö is in pain with her sexual identity, Mimmi has a difficult motherhood. Emma and Mimmi fall in love, Rönkkö tries to find sexual pleasure.

“It’s crazy that Girls girls girls coming out 2022: after all, this is a film that should have been made a long time ago. After all, it shouldn’t be radical at all to have girls at the center, to act on their own initiative – without being determined by the gaze of a man, or an adult. ”

However, it is radical. The history of the film is very masculine, so usually the look has been on it as well. The role of women has been to be a coveted object, a passive bystander, a quiet ornament. Or the victim, the one who has to save the man.

Girls girls girls there is no trace of passivity in the film. Girls are in the lead roles, they act, they are seen on their terms.

Haapasalo himself has used the phrase in his film understatedly radicalun underlined radical.

“Even when women are subjects, they often remain very distant or mystical, dangerous, or ethereal. We wanted to bring as real and recognizable girls as possible to the screen. ”

Just a perspectivefresh and positive, was one of the things that made Haapasalo interested when the screenwriters Ilona Ahti and Daniela Hakulinen contacted him in 2014.

“The way I deal with girls became really important to me. The tone is by no means instructive or finger-tingling. One of the most important things, for example, is that the girls are never victims in this film, they don’t even get into a close-up situation. ”

Girls girls girls When you watch a movie, you can easily see that you are waiting, you are afraid. When the girls go to a house party, when they go from the bar to the sequels. So that nothing just happens now.

Haapasalo says that this same assumption has come up in many viewer feedback. It also came to the fore during the role-playing of the film, at a time when those involved in the auditions had already been able to read the entire script.

Many of the young actors told how big of an emotional experience it was when they read that something bad was about to happen to the girls – but it never happened.

“We are conditioned to think that girls who act on their own will eventually face punishment,” says Haapasalo.

“I was still in pain at the operating room wondering if people were thinking that nothing was going to happen in this film. Even though I was making a story where the lack of danger was a big point, I still somehow subconsciously waited for that punishment. ”

The world changes slowly. For example, according to the latest equality barometer, more than half of women under the age of 35 had experienced sexual harassment in the past two years.

Not a particularly realistic film Girls girls girls So maybe you can say a movie?

Unfortunately, it is a fantasy from that point of view, Alli Haapasalo admits.

But, as important as dealing with sexual harassment in films, it is also important to make films that do not reproduce the harassment catalog, Haapasalo says. Otherwise, there are always victims.

“Maybe I’m still the same world healer I was in high school in Kerava: I believe in the power of film. Not that the film would completely change the world or anyone. But it can at least provide a basis for talking about things, in this case how girls are seen and treated. ”

Haapasalo says that when a screening of the film was held for high school students in Joensuu, he was particularly pleased with the feedback.

“One girl said she hoped their parents’ age group would see the movie – so they understood teens better.”

When reading Girls girls girls In 2014, Haapasalo was still living in New York. His first feature film, Anja Snellmanin from the book The autumn prince the script was nearing completion.

Although more attention was already paid to the role of women in cinema in the United States at the time, #metoo, which began in 2017 and had already started in 2016, was a report on sexual harassment. A matter of habitmovie, just ahead.

“I immediately realized that there was a new kind of tat in the script of Ilona and Daniela, but we didn’t have that much discussion and vocabulary on this at the time.”

Haapasalo had moved to New York in 2004 to study for a master’s degree at New York University’s Tisch School of Arts. As a bachelor, he had graduated from the University of Art and Design with a degree in Cinematography, which he had admitted in 1999, the same year as Lauri Nurkse and Dome Karukoski.

The line of cinematography was led at the time Lauri Törhönenwhich many women in the film industry later accused of sexual harassment in 2018.

The times were very different anyway. According to Haapasalo, for example, students were tried to guard the mainstream at school and were advised to avoid risks.

“We were warned quite a lot not to do anything embarrassing, we talked about the navel.”

There was also no guidance on finding your own handwriting. “Even if you should find that own voice as an author in an art school!”

There may have been a good purpose in the background, Haapasalo ponders. “There was a desire to raise the professionalism of Finnish authors, but at the same time the discussion about artistry, one’s own voice, was completely left out.”

It was different in New York.

“There the spirit was, ironically, almost auteur-spirited. And still in meetings with American production companies, it is emphasized that they are looking for self-sufficient factors. Personally, I would have thought cliché that auteur would be valued more in Europe. ”

When Haapasalo moved back to Finland in 2015, now together with her American husband, the atmosphere had changed. There had been a generational change in the film industry.

2016, the same year The autumn prince came to the premiere for example Smiling man and A girl named Sparrow.

“Both are strong-sounding, great movies. And as the self-loudness has intensified in domestic making, Finnish films have also been successful in the world. ”

Finland mentioned! It is still the case that the success of Finnish cinema, for example in Sundance, arouses special joy in Finland.

However, the world and the film industry have changed in this respect as well.

“It has been thought in the past that when I make good films at home, I get a call from abroad and go there to make foreign productions. Now it’s time for me to do my Finnish thing, but even with a London company. ”

There are many reasons for this change. One of them is that Finland is no longer the strange country to be described only when the 1970s Moscow is needed.

“The door is not only open in one direction, you can walk in both directions.”

Girls girls girls The film has been sold in more than 40 countries, including the United States. The success of Sundance has increased interest.

The fact that the film’s screenwriters, director, producer, and protagonists are all women hasn’t hurt either. After the metro, the film industry is well aware of gender inequality, and the Gothenburg Film Festival, for example, has decided to include half of the films made by women and half by men.

“I don’t want to belittle my film, but it’s a perfect facial cleansing film for festivals, even when the name is Girls girls girlsIn English Girl Picture.”

Alli Haapasalo laughs. “That we have such a feminist wonderful thing here. Now there’s a good momentum for feminist film – but of course we wouldn’t get to the festivals if the film wasn’t good. ”

The film’s Sundance victory also sparked interest in its director. In addition to production companies, Haapasalo has met with agencies.

“Of course it’s interesting to see and hear what it could be. But it wouldn’t make me sacred to make an American production as a person or a factor. ”

“Of course, it wouldn’t hurt if I could make a film with better resources. I’m a deserving factor in a shoestring budget, but it’s also really tough. ”

When Girls girls girls was the opening film of the BFI Flare festival in London in March, Haapasalo had arranged one day of production company meetings.

“Somewhere in the case of Oxford Circus, we had to put a text on a screenwriter friend that this is where Alli Kerava works for the next company. It was a great day, big and ordinary at the same time. ”

The Sundance Film Festival was held virtually this year. The inaugural guest night of the movie Girls Girls was celebrated at the Tennis Palace. Picture: Outi Pyhäranta / HS

Correction 14.4. at 12:19 pm: Removed the point where the Sundance Film Festival was incorrectly named the largest film festival in North America. The Sundance Festival is not the biggest.