The Mysteries of Good Friday in Italy’s Cultural Capital 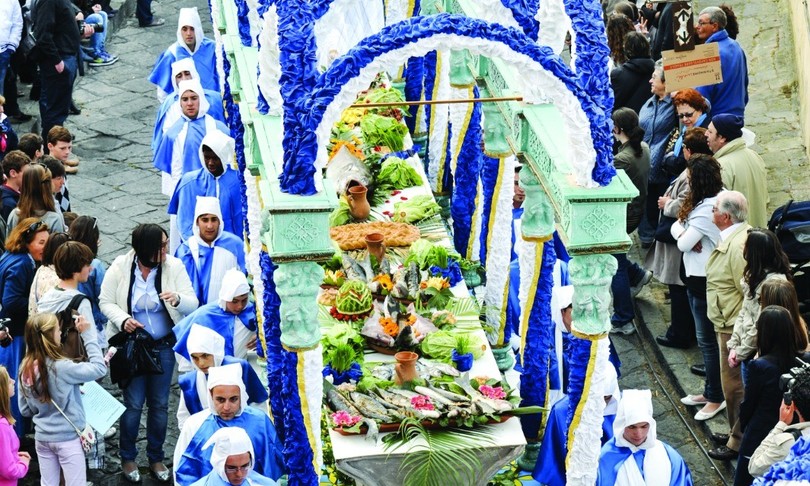 The sound of the trumpet and drum will disturb the silence in the streets once more. Procida resurrects one of its most poignant ceremonies, the Good Friday procession, after a two-year hiatus that halted a custom that dates back over four centuries and was unaffected by the plague or world wars. It also resurrects it as a cultural capital.

On Holy Thursday, the procession of the Caped Apostles, organized by the Arciconfraternita dei Bianchi, founded in 1581 by Cardinal Innico d’Avalos d’Aragona, in which, after the washing of the feet, twelve apostles dressed as brothers and wearing a cross on their shoulders and a crown of thorns on their heads run through the historic center of the island, preceded by the centurion, return the Mysteries

The allegorical floats carried by the arm are fashioned of papier-mâché, wood, and other low-cost materials and tell stories from the Old and New Testaments. The procession, like practically all others in the Neapolitan area and more broadly in the South, has its origins in the 17th century and the Spanish viceroyalty. The procession was originally only penitential, conceived by the brotherhood of the Turchini (or rather, of the Immaculate Madonna called dei Turchini), so named for the color of those who belonged to it, founded in 1629 by the Jesuits, and established in the old church of San Michele, from which the brotherhood emigrated in the 700s because she became the owner of the church of San Tommaso d’Aquino, also known as the new church on the island Hooded knockers smeared sackcloth over their faces.

A especially gory parade, which the church sought to tone down a century later by turning it into a symbolic procession. The first wooden and polychrome statue arrives in 1728, that of the dead Christ, a work commissioned to the Neapolitan sculptor Carmine Lantriceni, which closes the show; years later, that of the Our Lady of Sorrows, also made on commission, with a wooden head and hands, but a stuffed puppet dressed in a real dress, according to an eighteenth-century tradition that is also that of the shepherds of the crib. These two statues were joined by others in wood and papier-mâché presented by a philanthropist in the nineteenth century. The Mister establishedi was only built in the 1940s of the twentieth century, and beside certain ‘fixed’ ones, used every year and arriving from several churches on the island, see the ‘variables’ or ‘furniture,’ made every year and worn by young people costumed as Turchini brothers.

Some, including the most representative, are housed in a small island museum. I Ragazzi dei Misteri, L’isola dei Misteri, and Good Friday, along with the schools, are the absolute protagonists in their production, using very various techniques and materials. A project that begins from afar, with planning beginning in October and culminating in the material fabrication of the Mystery in January. “For Procidans, Good Friday is an unending day; it lasts all year,” Nico Granito, an art teacher, says to AGI.

Even the path they follow is the same every year, running through the island’s historic center, though various routes have been explored on a trial basis. This year, due to the tight deadlines set by the late decision that it was possible to return to the presence in the Easter rites, reuse materials were also utilized to construct the Mysteries; in the future, environmental concerns will be prioritized, with more recycling.

Allegorical floats are typically made up of one or more wooden boards (called bases) up to 8 meters long and 2 meters wide, on which sculptural representations made of papier mache, wood, plastic, polystyrene, and fabric, with various architectural styles and even 4 meter high colonnades, are set up. The Mysteries are kept hidden during the realization phase, so that they can only be seen for the first time during the Good Friday procession, and then they are disassembled almost shortly afterward. This time, however, they will be on display to the public in the outdoor sections of the Citadel of the Mysteries, in the village of Terra Murata, until May 1st, as part of the Procida 2022 activities.

An photograph of the Procida parade taken at night.

In addition, the Ritual Project laboratory opens on the days of the events. A team of technicians will immerse themselves in the evocative island atmospheres on Holy Thursday night and Friday morning to create a digital audio archive on the rituals of Holy Week in Procida, ‘capturing’ the sound of the trumpet, the songs of Christ in Terra Murata, the drums and chains, and the Addolorata’s funeral march. Professional sound engineers’ work will serve as the foundation for a study and reworking by musicians Pier Paolo Polcari (Almamegretta) and ubikdaniele.

“The goal is to maintain the past, preserve identities, bring generations together, and, above all, promote the great intangible cultural legacy of Procida in a contemporary context,” says Agostino Riitano, director of Procida 2022.

“We proudly demonstrate one of the identification ceremonies to which our extended community is most attached in this moment of such strong visibility for our island,” says AGI’s mayor, Dino Ambrosino. Generations of islanders gather around the Procession of the Dead Christ and the Mysteries, passing down the art of creating artifacts and a great religious devotion. A ritual that tells the island’s and people’s stories. The concept of recording the noises and storing them in a digital archive then opens a new, equally fascinating page. The Procession will also be more inclusive this year, in line with one of the pillars of the Procida 2022 dossier: it will be broadcast live to the blind and visually handicapped, thanks to a local television effort.”