In Moscow, Alexei Lyoubimov plays a Ukrainian work, his recital interrupted by the police 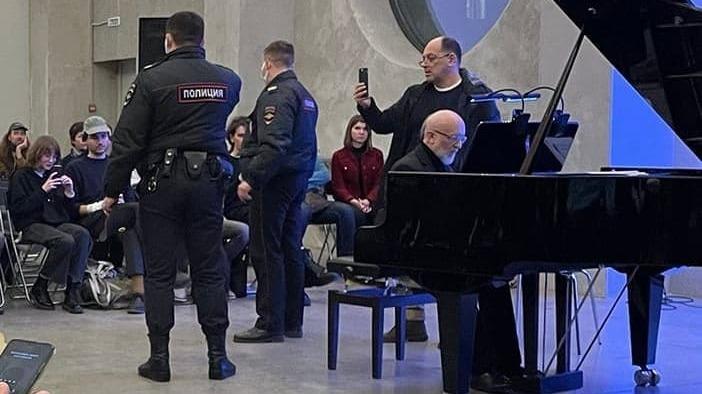 In the first part of the concert, the musician performed a piece by Valentin Silvestrov. A refugee in Germany, this composer compared Vladimir Putin to bin Laden.

The music was interrupted by the force of the bayonets. Or, rather, by an anonymous bomb threat. This is the pretext invoked on Wednesday evening by the Russian police who intervened in a small room in Moscow, where a recital by pianist Alexei Lyoubimov was held. The 77-year-old Russian was performing there with soprano Yana Ivanilova, when police officers appeared on stage, in the second half of the evening, ordering the musician to stop the music immediately. Despite the pressure, Alexei Lyoubimov completed his performance of Schubert’s Impromptu No.2 Op.90 to acclaim.

The irruption of the Moscow police at the concert of Alexei Lyoubimov was widely shared on social networks by the public present in the room. The images posted on Twitter or even on Telegram show two agents accosting the pianist, in full interpretation, leaning towards him then addressing the spectators. At the end of the piece, Alexei Lyoubimov briefly raises a victorious fist to the sky as the audience gives him a standing ovation. Evacuated shortly after, the building was searched, in vain, for two and a half hours. “First we waited for the dogs to arrive, then the dogs checked the premises. Everything dragged on until half past midnight”testified Thursday an employee of the room, the Rassvet, for the independent newspaper The Moscow Times .

Culture caught in a vice

Behind the bogus bomb threat was, perhaps, a more political motive, many observers felt. The arrival of the police “could be linked to the nationality of the composer”, mentions for example the Rassvet employee. Because before giving the music of the Austrian romantic, Alexeï Lyoubimov had played Valentin Silvestrov. Refugee in Germany since the beginning of the Russian invasion, the recognized Ukrainian composer, now 84 years old, had notably created in recent weeks a new orchestration of Prayer for Ukraine, a traditional patriotic anthem. The composition was notably performed in March during the concert for Ukraine organized by the Met Opera in New York.

Friend of Valentin Silvestrov, Alexeï Lyoubimov had chosen to play a less sulphurous piece in Moscow. His choice had stopped at the musical cycle stagesfor soprano and piano, a work on which the two artists had already collaborated in the past, notably in 1989. Historically unloved by the Soviet power, the composer also did not mince his words against the President Russian Vladimir Putin. “Who supports Putin? Criminals! He recruited them and dressed them in elegant costumesValentin Silvestrov said in an interview last month with the German channel German wave . He’s a terrorist like Ben Laden , but a thousand times more powerful. He should be classified as an international terrorist and put on the wanted list.”

Since February 24, the Russian authorities have tightened their grip on the media and on all forms of opposition, by closing several newsrooms based in Russia and carrying out mass arrests. It is forbidden to use the word “war” to refer to the operations carried out by the Russian armed forces in Ukraine, and qualified “special military operation” by the Kremlin. In the world of culture, the conflict has finally led to a cascade of cancellations of concerts, film releases and even ballet tours, as well as several hasty departures of European talent.