A tomb of a rich freedman re.emerges in Pompeii and tells new stories 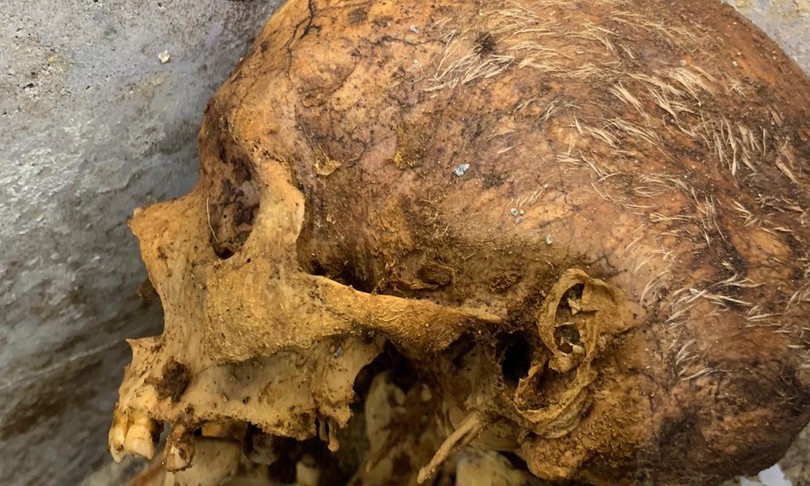 ` – A discovery with two peculiar implications. AND Pompei, the ancient city buried by Vesuvius in 79 AD, it still surprises–

Gives new excavations in the necropolis of Porta Sarno, east of the ancient urban center, there is evidence that shows in Greek were held here, but also the mummified human remains of a man in a period in which the burial of adults took place after incineration.

A skull with hair and even a well.preserved ear and bones of a man over sixty were found in an ancient burial place. On the marble slab placed on the pediment of the tomb, the commemorative inscription gives us the identity of the deceased, Marcus Venus Secundio–

The former slave buried as a dominus

The sepulchral structure, dating back to the last decades of the city’s life, consists of a masonry enclosure on the facade of which traces of paint are preserved, green plants on a blue background– Marcus Venerius Secundio, whose name also appears in the archive of waxed tablets of the Pompeian banker Cecilio Giocondo owner of the homonymous domus along Via Vesuvio, he was born a slave and was the keeper of the temple of Venus, but he was released, reaching a good social and economic position–

Not only his tomb testifies to this, but also there‘registration who tells how, in addition to being Augustale, or a member of the college of priests dedicated to the imperial cult, “Gave Greek and Latin ludi for the duration of four days”– “Ludi graeci is to be understood as performances in Greek, and is the first certain evidence of performances in Pompeii in the Hellenic language, hypothesized in the past on the basis of indirect indicators only”, explains the director of the Park, Gabriel Zuchtriegel.

For archaeologists, the burial is also singular, as it features one of the best preserved skeletons found in the ancient city. The deceased was interred in a small cell of 1.6 x 2.4 meters located behind the main facade of his funeral monument. In the enclosure they were found two cremations in urn, one in a beautiful glass container belonging to a woman named Novia Amabilis, probably his wife– In the Roman phase of Pompeii only small children were buried.

The burial of Marco Venerio is therefore unusual because of the funeral rite adopted, considering that it was an adult man of more than 60 years, as emerges from a first analysis of the bones. The burial chamber, a hermetically sealed environment, created the conditions for the exceptional state of conservation in which the skeleton was found– Funeral items recovered, including two glass unguentaria and numerous fragments of what appears to be fabric–

The yellow of mummification

“It remains to be understood whether the partial mummification of the deceased is due to intentional treatment or not – underlines Llorenç Alapont professor in Valencia – in this the analysis of the fabric could provide further information. From the sources we know that certain fabrics such as asbestos were used for embalming “.

The human and organic remains found were transported to the applied research laboratory in the Pompeii site where they underwent analysis and conservation interventions. The Park has also started a series of safety measures, aimed at guaranteeing the maintenance of the necropolis of Porta Sarno pending the definition of a broader project for the restoration and use of the area. The necropolis is currently not open to visitors as it is beyond the local railway line, but a feasibility study is underway to include it among the areas open to the public.

“Pompeii never ceases to amaze and confirms a history of redemption, an international model, a place where research and new archaeological excavations have returned thanks to the many professionals of cultural heritage that, with their work, they do not stop giving extraordinary results to the world that are a source of pride for Italy “, remarks the Minister of Culture, Dario Franceschini”