The smell of dead Europe 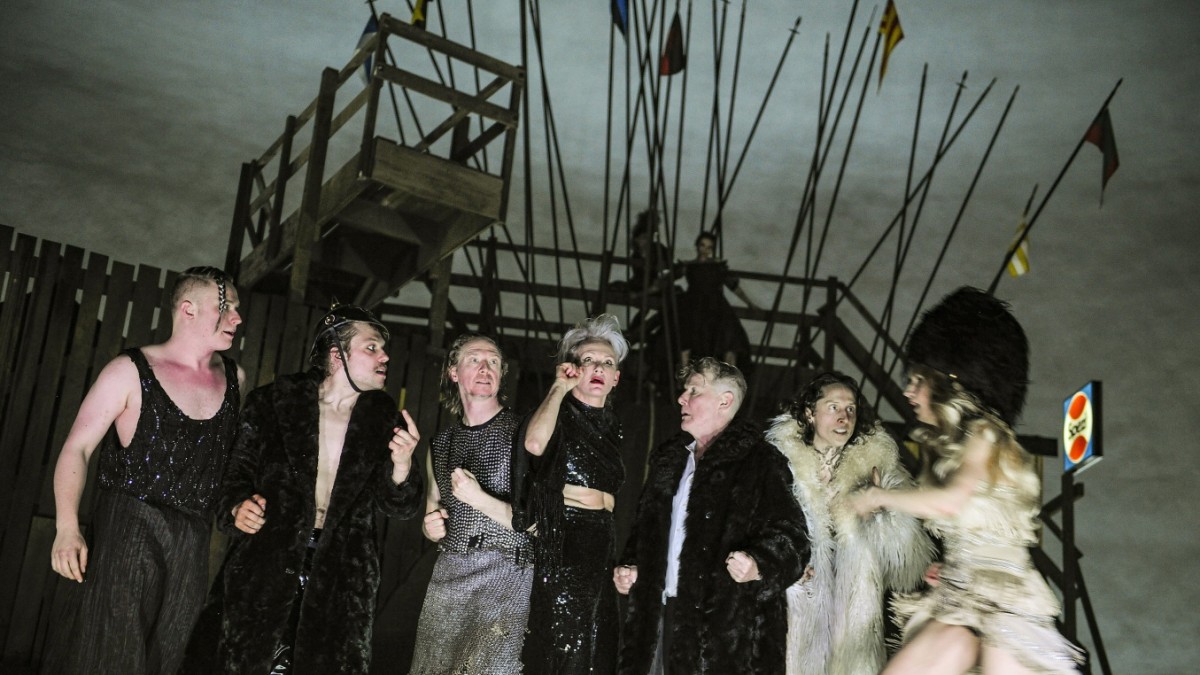 It’s war in Europe. For 16 years already, it will last 14 more. When Frank Castorf began to stage Schiller’s “Wallenstein” at the Staatsschauspiel Dresden, the “dramatic poem” that tells of the glory and decline of the eponymous general at the time of the Thirty Years’ War, Putin’s troops had not yet invaded Ukraine. No one could have guessed that another war would break out in Europe during rehearsals in February 2022, but it now overshadows the production and gives it a bloody topicality. With the exception of a few allusions, such as to the mud of the Ukrainian plain (which German troops also waded through), Castorf avoids concrete references. If there is an aggressor who gets his fat off here, then it is Germany, from whose soil so much suffering has already emanated.

Schiller describes as a war crime pars pro toto how the imperial troops under Tilly devastated Magdeburg in 1631. “Magdeburgizing” became the term for the merciless raping and killing of a resistant urban population – and who wouldn’t think of Mariupol, Bucha, the atrocities in the Ukraine. Castorf continues the trail of blood until the Second World War, to which his scene collage in film excerpts, text and image associations repeatedly refers: the German Wehrmacht’s attack on Poland, the “Blitzkrieg”, the campaign against Russia. Eastern Front 1942, the blockade of Leningrad, horse carcasses in the snow, “the smell of dead Europe”. It’s a story of destruction, genocide and horror. Which in the end leads away from Europe, to the Zappatists of Mexico, representative of all those indigenous victims to whom no one devotes a drama.

It starts with a prelude that takes Schiller’s sublime “prologue” ad absurdum with bare facts: With faceless latex masks and black boots, the ensemble appears naked and bloodied on stage and joins in in a cabaret, acoustically almost incomprehensible conversational tone Hitler and Poland and the “cheerful” art with which one intends to cope with the seriousness of life. Then they trundle off like zombies, these German ghosts. Later, when Frank Büttner appears in the role of the insulting Capuchin, he too draws his clothes blank – to prove his thesis that naked German men with their “balls” and pink bellies appear “peculiarly defenseless” and would no longer arouse fear. The title hero, played by Götz Schubert, prefers to stay dressed. Nevertheless, he does not escape his disempowerment.

For his first production at an East theater since he was no longer director of the Berlin Volksbühne, Castorf has taken on the whole of “Wallenstein”, all three parts: “Wallenstein’s camp”, “The Piccolomini” and – very compressed and with the regrettable neglect of the strong female role of Countess Terzky – “Wallenstein’s death”. A seven-hour tour de force with moments of brilliance and happiness in the first half and tiresome sags in the second. As usual, Castorf relies on the adrenaline that drives the ensemble to energetic peak performances, which is also rousingly successful in Dresden. With no other director do the actors and actresses appear so impressively free and self-confident, while still being powerful, erotic and beautiful in their extreme exertion. Adriana Praga Peretzki’s eccentric war and circus costumes with their tufts of feathers, ruffles and uniform skirts – she doesn’t let any wokeness forbid her from wearing high heels and suspenders – contribute just as much to this as the close-ups of flickering faces through the live cameras.

The wooden revolving stage frame by Aleksandar Denić shows a kind of western fort with board balustrade and sutler’s tent, above the standards of the war troops jut out into the wide stage horizon. For a long time, the game was played in front of a golden curtain, with a huge double-headed eagle on it as the heraldic German heraldic animal. Behind it, a cosmic cave opens up for the astro-believing Wallenstein. Waiting for a favorable planetary constellation, the procrastinator, zodiac sign Aquarius, missed the right time for his plan to finally bring about peace in Germany. Wallenstein secretly negotiates with the Swedes. Schiller doesn’t know whether this is meant seriously or tactically, and it certainly doesn’t come out with Castorf and his protagonist, in whom this thread of the story gets tangled up and lost in the chaos of the extempores.

The madness and disorder of war reign.

In the first three hours until the break, the production captivates with its wild dynamics. The madness and disorder of war reign. The rhythm is also right, the balance between energy and agony, ironic surges and elegy. Castorf allows enough time to let the revolving stage work, to create atmosphere, to take Schiller at his word. The smoke machine is in constant use, the soundtrack consists of relevant folk and soldier songs, hard rock numbers and even Laibachs gloomy “Birth of a Nation” has its own multi-layered commentary (music: William Minke), and “Wallenstein” has probably never been as funny as it is here, despite all the horrors of war. Wallenstein’s officers dash around in cardboard tanks in a grandiose pastiche and ram each other as if they were on a go-kart track.

Excess is part of Castorf. Scenes that torment and stretch. The labor pangs with which Henriette Hölzel, who is famous in many roles as a sutler, gives birth to a doll baby, drag on endlessly. As the hour progresses, it’s more of a too much pathetic Schiller text performance that wears you down. The scene between the play’s two idealistic lovers, Max Piccolomini (Marin Blülle) and Wallenstein’s daughter Thekla (Kriemhild Hamann), becomes almost bland and declamatory. And Götz Schubert degenerates as Wallenstein into a worn-out rock star and a shaky candidate. In the second half it all loses traction, you have to stick to the show value of the staging, which is consistently high. And of great acting interludes such as that of Daniel Séjourné as a dancing pantomime Frenchman. But as Schiller says: “Where much is lost, there is much to be gained.” What makes this production an event after two years of Corona distance is its sweating, spitting, highly intense physicality and intimacy.