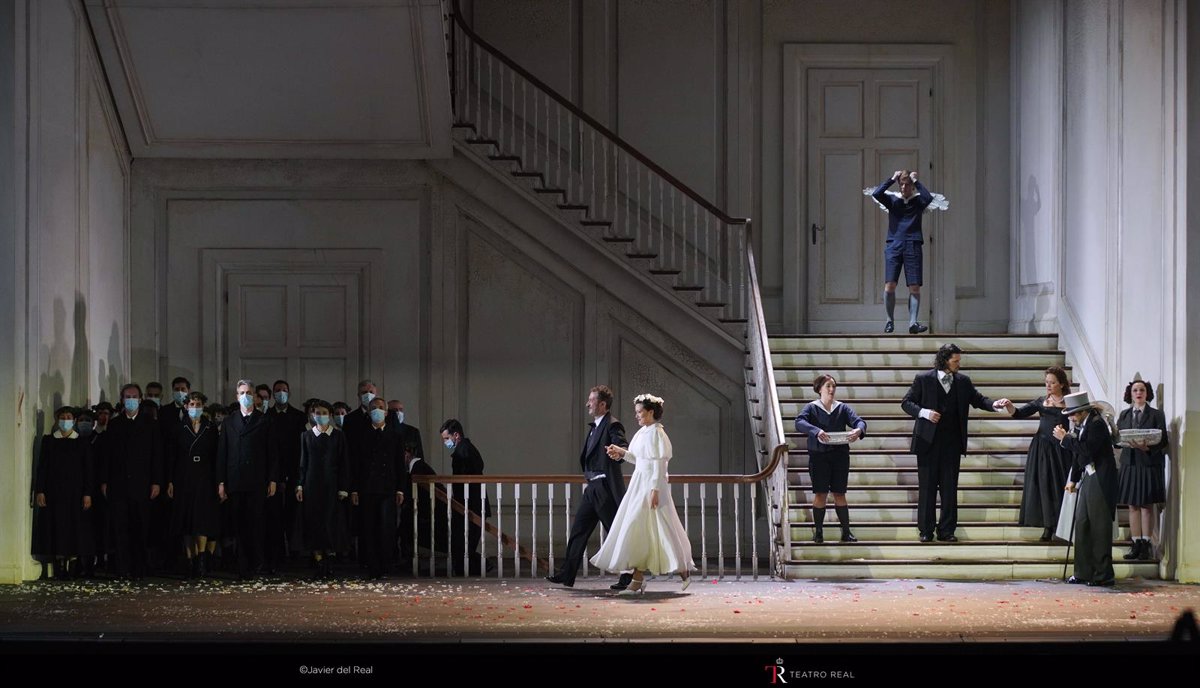 The Teatro Real opens this Friday, April 22, ‘The Marriage of Figaro’ that return to the Madrid Coliseum without the obligation for the first time to wear a mask by the public, as sources from the institution have confirmed to Europa Press. This function takes place after The Council of Ministers will approve this week a Royal Decree by which the use of masks is no longer mandatory in interior spacesan effective measure since April 20.

The same sources have detailed that the Royal Theater maintains the security measures established since the start of the pandemic, such as disinfectant mats at the entrances or points with hydroalcoholic gel distributed throughout all spaces, among others.

Thus, this choral opera can be seen until May 12, in a total of 13 performances. “Now it generates a lot of demand but it is a growing phenomenon to reach 13 functions. We all have to congratulate ourselves for that.“Artistic director of the Teatro Real, Joan Matabosch, stated at the press conference.

The director has recalled that this “popular title” did not always enjoy the approval of the public because, initially, the critics of the time considered that “so cultured but boring operas should only be performed in conservatories” and, although later, it was performed on several occasions, so many functions were never performed.

Since the reopening of the Teatro Real‘The Marriage of Figaro’ It has been offered in five of its 25 seasons: in 1998, with Gianandrea Noseda and Jürgen Flimm; in 2003, with Antoni Ros Marbá and Marco Arturo Marelli; in 2009, with Jesús López Cobos and Emilio Sagi, whose production was presented again in 2011 with Víctor Pablo Pérez, and in 2014 with Ivor Bolton.

“It is the greatest opera music ever written, with landmarks of musical composition such as the act two finale or the act three sextet or the act four finale“, added Ivor Bolton, musical director of the Teatro Real, who is directing ‘The Marriage of Figaro’ from his pit, after the success obtained with the same score in 2014.

This opera will be Mozart’s seventh production in which he assumes the musical direction at the head of the Teatro Real’s Choir and Orchestra, and the third in which he works side by side with Claus Guth, after ‘Lucio Silla’ (2017) and ‘Don Giovanni’ (2020).

‘The Marriage of Figaro’ is an original production of the Salzburg Festival (2006) which entrusted Claus Guth with the stage direction of the three Mozart operas with libretto by Lorenzo da Ponte, one of which, ‘Don Giovanni’, was offered at the Teatro Real last season.

Considered the most perfect of Mozart’s operas, ‘The Marriage of Figaro’, premiered in 1776, was written in less than a year by Wolfgang Amadeus Mozart (1756-1791) and the versatile writer and librettist Lorenzo da Ponte (1749-1838), in their first and fruitful collaboration, which would continue with ‘Così fan tutte’ and ‘Don Giovanni’.

Both creators were imbued with the fervor of the new revolutionary ideas defended by the play by Pierre-Augustin de Beaumarchais (1732-1799) on which the opera is based, ‘La folle journée, ou Le mariage de Figaro’, premiered amid of the scandal just a year before, which led to the author’s imprisonment and the banning of the work in various European courts.

However, in ‘The Marriage of Figaro’, Da Ponte reduces and hides the more explicitly political content of the work, maintaining the complex relationships between the different characters under the classic forms of opera buffa, in an apparently comic entanglement, with a scenic proposal with which Claus Guth tries to explore what beats in the soul of the characters beyond comedy.

“The shell hides the ticking time bomb inside“, Matabosch has indicated in this regard. “It is a work about the impossibility of controlling feelings, with complex characters where there are no good or bad, and this is an ideal show to enter the world of opera“, has summed up.

In parallel with the classic structure of the score, Guth, together with the set designer and costume designer Christian Schmidt, places the plot in an old and austere palace, with the characters corseted in costumes that reveal their social origin and determine their way of proceeding. From there, Guth ‘unmasks’ what happens inside the characters with the help of a silent ‘angel’ who shows the viewer how unspeakable, murky or dark love relationships are.

On this occasion, two select casts give life to the characters of this choral opera where Andrè Schuen and Joan Martín-Royo will give life to the Count of Almaviva; María José Moreno and Miren Urbieta-Vega, to the Countess of Almaviva; Julie Fuchs and Elena Sancho Pereg, to Susanna; Vito Priante and Thomas Oliemans, to Figaro; Rachael Wilson and Maite Beaumont, to Cherubino; Monica Bacelli and Gemma Coma-Alabert, to Marcellina; and Fernando Radó and Daniel Giulianini, to Bartolo.

Precisely, the presentation was attended by Julie Fuchs, María José Moreno and Vito Priante. Fuchs has acknowledged that he loves the role of Susanna because she is a character “with a lot of vitality and humor“, encouraging the younger public to attend, while Moreno has specified that his character “he suffers much more than normal”, praising that the current production gives his character more realistic nuances.

Priante, for his part, explained that he plays a very basic character, completely different from the Figaro in ‘The Barber of Seville’. “The true protagonists of this work are the women,” he concluded.

The performance of ‘The Marriage of Figaro’ on Saturday, May 7, at 7:30 p.m., will be broadcast live on MyOperaPlayer and the recording will later be included in their catalogue. Radio Clásica, of RNE, will record the opera for its deferred broadcast on a date yet to be determined.

The premiere will be preceded by a Preview for those under 36 years of age on April 21 at 7:00 p.m., at the end of which an ‘After Opera’ for young people will be offered for the first time. The performances of ‘The Marriage of Figaro’ are sponsored by Endesa.