The video shows police trying to interrupt a top pianist’s concert in Moscow, but this just keeps playing: Alexei Lyubimov tells what happened next 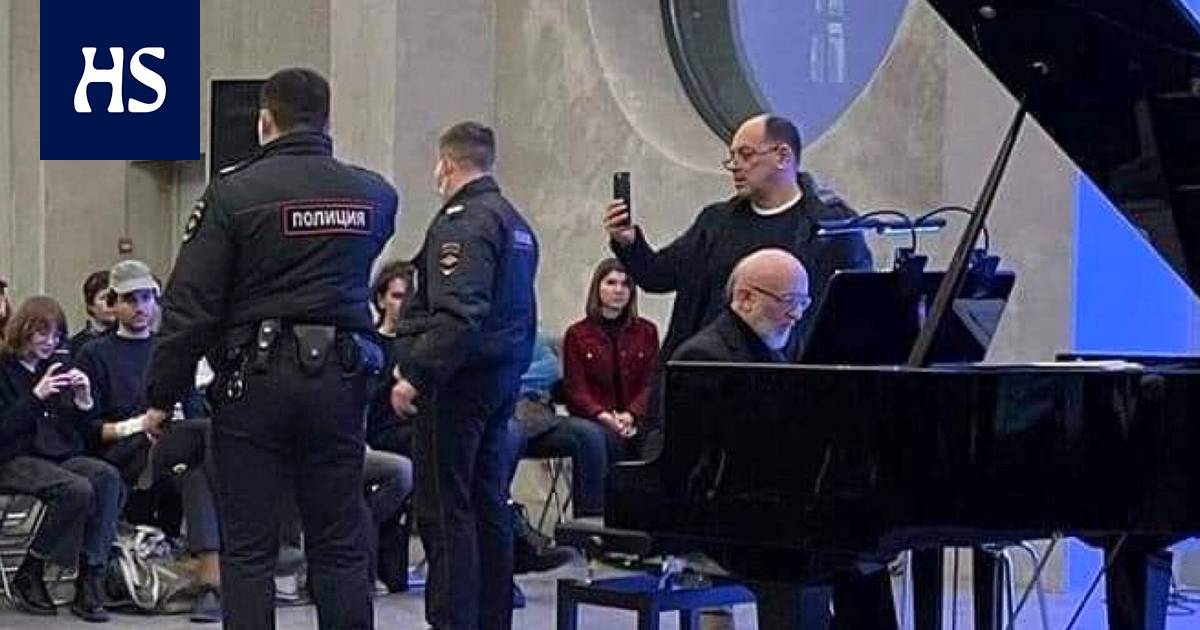 on video shows a startling series of events from last week.

Even a long-time favorite pianist for Finns Alexei Lyubimov77, plays in the concert hall of DK Rassvet in Moscow Franz Schubertin impromptu in E flat major opus 90 No. 2 and is already towards the end of the work when police step on stage and shout at the concert due to an interrupted bomb suspect.

But Lyubimov continues to play. The police are confused next to the grand piano.

The audience is mostly left on their benches. Everyone can guess that the bomb threat is an excuse.

If the situation were serious, the police would hardly freeze at the grand piano when Lyubimov calls in complete peace until the end of the impromptu.

The real reason for the interruption is presumably the concert program, which was boldly attended by a Ukrainian composer. Valentin Silvestrovin teos.

The Moscow crowd stands up after the impromptu and applauds wildly. Lyubimov shakes his fist triumphantly and smiles broadly.

Only then does he make eye contact with the police and begin a conversation.

The video recording is interrupted.

What what happened after that? Lyubimov answers the question with an easy message.

“No worries. I happen to be at the airport in Helsinki right now. The flight is just leaving, and when I get there I can answer questions. ”

After Lyubimov gets to his home in Paris to celebrate his wife’s birthday, he answers questions over the phone.

“We had agreed to perform the music of the great Ukrainian composer Valentin Silvestrov and Franz Schubert in Moscow as early as December,” he explains.

Russia reportedly invaded Ukraine in full force on 24 February. However, according to Lyubimov, Silvestrov was still shown in Moscow in March without any problems.

Russian authorities should not pay new attention to 84-year-old Silvestrov and his Ukrainians until his escape from Kiev via Poland to Berlin in March became internationally public; The New York Timesia and Deutsche Welle.

“I was in touch with Silvestrov’s daughter throughout the getaway. The composer was taken by bus and, with the help of a journalist from Deutsche Welle, past the queue to the Polish side, from where the conductor Vitali Alekseenok drove him to Berlin, ”says Lyubimov.

In interviews, Silvestrov has demanded that NATO impose a no-fly zone over Ukrainian airspace. His Maidan2014and its composition Prayer to Ukraine has become one of the symbols of the defensive struggle and of international support for Ukraine.

In interviews, Silvestrov has also called Putin a terrorist who is more dangerous than Osama Bin Laden once.

“Perhaps the interviews were effective because on the morning of the concert day, April 13, Rozkomnazor’s authorities contacted the administration of the concert hall and said the concert should be canceled,” Lyubimov says.

Rozkomnazor is, in principle, the executive body of the Russian Federation under the control of “communications, information technology and the media”.

In practice, it is a censorship authority that has expanded its activities during the full-scale Russian invasion.

“The management of the hall told them that a sold-out concert cannot be canceled,” Lyubimov says.

Nor was there any article or decision that would have made Silvestrov’s music banned.

However, just before the concert, police visited the scene.

“We explained that there is nothing reversal here and we are not doing anything forbidden,” Lyubimov says.

The end result is reminiscent of Soviet practice: the authorities “made it clear” that the concert should be canceled, but if the artists kept their heads, a direct ban on performance might not have come.

“So even now we presented Valentin Silvestrov’s size to a quiet audience Stupeniseries (steps) without interruption. ”

This is a series of songs for soprano and piano from 1982. Composed by the composer in 1998, and Lyubimov and Jana Ivanilova recorded it in 1999.

The embedded is a series of songs Elegy-osa.

Stupeni song series after that came the Interim, after which Schubert’s four impromptu and the same composer’s staves with a soprano were to be performed.

“I played impromptu and the cops came on stage saying now we have to stop and leave the hall because of the bomb threat. I understood this as a provocation and kept playing. ”

After wild applause, Lyubimov agreed to talk to the police.

“They said the security of the building needed to be inspected because of the bomb threat.”

According to Lyubimov, it was clear that the intention was to prevent the music of the Ukrainian composer from playing.

“But they were late and only interrupted Schubert’s part!”

The audience waited another hour for the concert to continue outdoors on the street. Eventually it came to light that the “inspection” continues and the rest of the concert has been canceled.

The pianist continued with his friends to a nearby cafe.

“We had fun. I wondered if the invitation would come for questioning, but it didn’t. I will perform in Moscow again in the same week. ”

Ljubimovilla is home to Paris, but direct flights from Moscow were not available due to the war.

“After the concerts, I took a train to St. Petersburg and from there by bus to Helsinki, from where I flew to Paris. There were no problems on the Finnish-Russian border. ”

Ljubimov, who has performed countless times in Finland, is well-known and still says that the audience knew what the message of the suspended concert was.

“This is probably my last year at the Moscow Conservatory. I don’t like teaching if art is suppressed. Besides, I’m older and my vision is declining. ”

What can Professor Lyubimov say in public in a situation where freedom of speech has been restricted in Russia new legislation even threatening fifteen years in prison?

“I am against all warfare and aggression. Leaders have done things that are not good for Russia. ”

“I am involved in organizing a charity concert to help Ukrainians here in Paris,” Lyubimov says.

“And I just talked in Finnish Anssi Karttusen with. He promised to join. ”

Alexei Ljubimov is a visitor to Finland for several times. Picture from 1998. Picture: Juhapekka Tukiainen

■ Born in 1944. Studied at the Moscow Conservatory under the legendary Heinrich Neuhaus.

■ Struck through Moscow as early as the late 1960s. Made many Soviet premieres of music by Arvo Pärt, Valentin Silvestrov, John Cage, Terry Riley and Karlheinz Stockhausen.

■ Ljubimov was considered suspicious by the Soviet authorities and was not allowed to travel abroad for years.

■ Familiarize himself with the historically enlightened performance practices of the Baroque and founded the Moscow Baroque Orchestra and the Alternativa Music Festival. He also plays Viennese classics on the piano. Huge software from baroque to contemporary music.

■ After going abroad, he made a great solo career in the most prestigious concert halls. A multiple-time guest of Finland.

■ Long-time professor at the Moscow Conservatory and the Salzburg Mozarteum. Currently living in Paris.