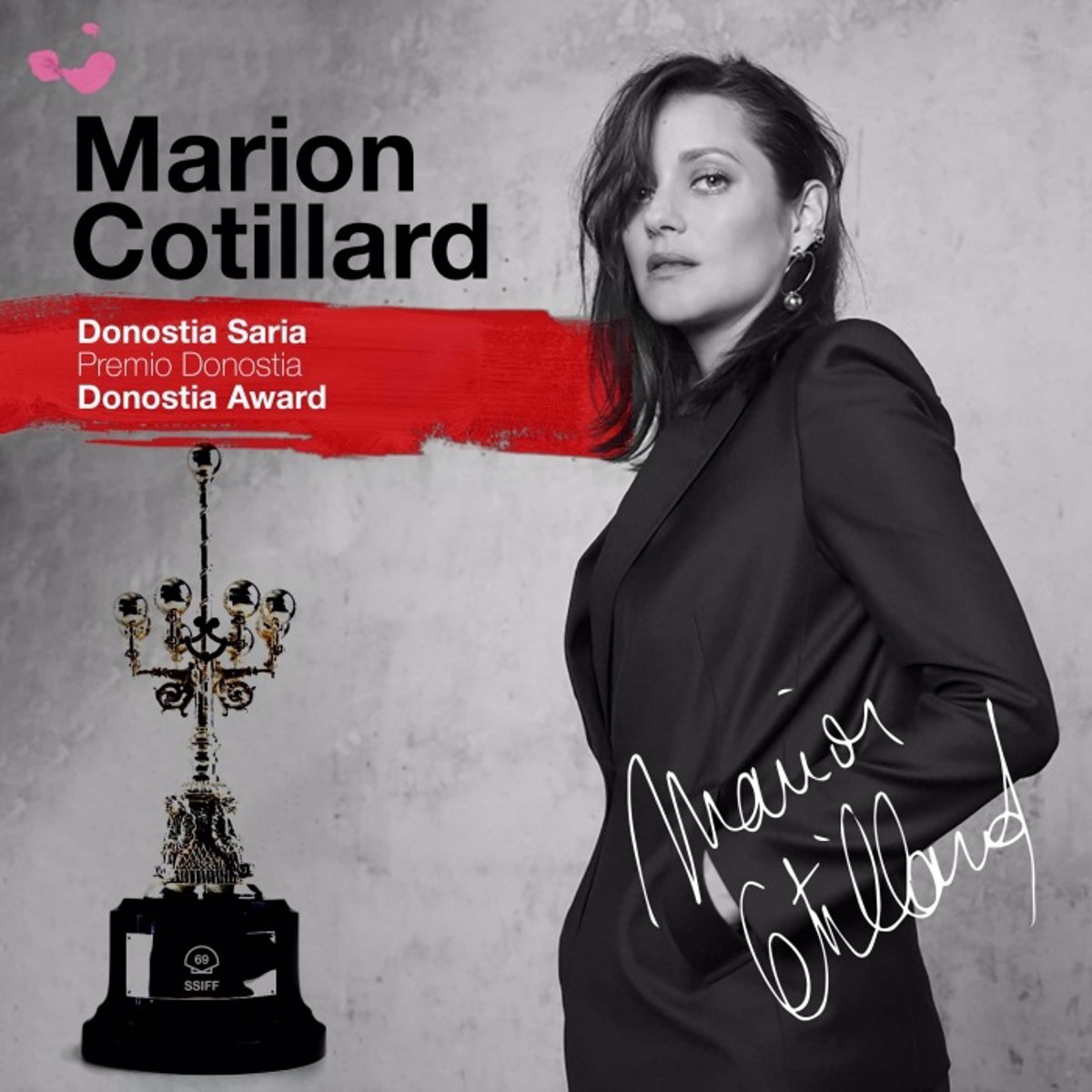 The documentary ‘Bigger Than Us’, which he has co.produced, will be screened on September 18 at the Victoria Eugenia

The actress Marion Cotillard will receive the second Donostia Prize that will be awarded at the 69th edition of the San Sebastián Festival, which will be held from September 17 to 25 in the capital of Gipuzkoa. The honorary award will be presented to the French actress on September 17 during the opening ceremony of the contest at the Kursaal Auditorium.

In a statement, the organizers of the Zinemaldia stressed that Cotillard is “one of the most international French actresses in contemporary cinematography.”

Winner of the Oscar, Golden Globe and BAFTA Award for her portrayal of Édith Piaf in ‘La Môme / La Vie en Rose’ (‘Life in Pink’ by Olivier Dahan, 2007), the French actress “has shone with intensity in European and American productions that have led her to play with equal talent dramatic, comic and action roles alongside filmmakers such as Michael Mann, Christopher Nolan, Woody Allen, Steven Soderbergh, James Gray, the Dardenne brothers, Arnaud Desplechin, Nicole Garcia, Leos Carax and his partner, the director and actor Guillaume Canet “.

Born in Paris into a family of artists, she made her debut as an actress when she was still a child in one of the plays of her father, Jean.Claude Cotillard.

After participating in television series, he made his first film role in ‘L’histoire du garçon qui voulait qu’on l’embrasse’ (Philippe Harel, 1994). His participation in ‘Taxi’ (Taxi Express, Gérard Pirès, 1998) earned him the first of his six nominations for the César Awards.

Later she would play Lilly Bertineau again in ‘Taxi 2’ (2000) and ‘Taxi 3’ (2003) .both directed by Gérard Krawczyk., the sequels to the blockbuster action saga written and produced by Luc Besson.

Cotillard unfolded to embody the two opposing twin sisters in ‘Les jolies choses / Pretty Things’ (Gilles Paquet.Brenner, 2001), with which she was once again a candidate for César in the category of best new actress.

Likewise, his fame in France “grew thanks to the romantic comedy ‘Jeux d’enfants / Love Me If You Dare’ (‘Love me if you want’, Yann Samuell, 2003), after which he made his first foray into Hollywood thanks to the American Tim Burton, who included her in the cast of ‘Big Fish’ (2003) “, they remember from the Festival.

Finally, she won the César for best supporting actress in the romantic drama with a war background ‘Un long dimanche de fiançailles / A Very Long Engagement’ (‘Long engagement Sunday’, Jean.Pierre Jeunet, 2004), and that year she also formed part of the ‘Innocence’ team (Lucile Hadzihalilovic, 2004), which won the New Directors Award in San Sebastián.

After working on ‘Mary’ (Abel Ferrara, Perlak, 2005), on ‘Sauf le respect que je vous dois / Burn Out’ (Fabienne Godet, New Directors, 2005) and on ‘Fair Play’ (Lionel Baillu, Kutxa Award New Directors, 2006), the actress gave life to the owner of the restaurant with whom the character of Russell Crowe falls in love in ‘A Good Year’ (‘A Good Year’, 2006), by Ridley Scott.

From the San Sebastian contest they have also recalled that “their
An applauded recreation of the famous singer Édith Piaf marked a turning point in her career by becoming the first French actress to win the Oscar for a performance in the French language. “Her role in ‘La Môme’ (‘Life in Pink ‘, Oliver Dahan, 2007) also earned Cotillard the Golden Globe, the Bafta Prize, and her second César Prize, this time as lead actress. Shortly after, she received the Medal of the Order of Arts and Letters of France.

From then on, Cotillard multiplied his appearances in Hollywood productions such as ‘Public Enemies’ (‘Public Enemies’, Michael Mann, 2009), in which he played Billie Frechette, the girlfriend of gangster John Dillinger; the musical ‘Nine’ (Rob Marshall, 2009), in which she again showed her skills as a singer and dancer; action movies such as ‘Inception’ (‘Origin’, 2010) or ‘The Dark Knight Rises’ (‘The Dark Knight Rises’, 2012), both directed by Christopher Nolan; comedies such as ‘Midnight in Paris’ (Woody Allen, 2011) and thrillers such as ‘Contagion’ (Contagion, Steven Soderbergh, 2011), ‘Blood Ties’ (Blood ties, Guillaume Canet, 2013) and ‘Allied’ (Aliados, Robert Zemeckis, 2016); or dramas like ‘The Immigrant’ (‘Ellis’s Dream’, James Gray, 2013), which was his first leading role in an American film, or ‘Macbeth’ (Justin Kurzel, 2015).

Meanwhile, the actress has continued to work with important European filmmakers such as Jacques Audiard (‘De rouille et d’os / Rust and Bone’, ‘Of oxide and bone’, 2012) or the Dardenne brothers (‘Deux jours, une nuite / Two Days, One Night ‘;’ Two Days, One Night ‘, 2014), with whom he got his fifth and sixth Caesar nominations, respectively; and he has also performed under the orders of Xavier Dolan (‘Juste la fin du monde / It’s Only the End of the World’, ‘Solo el fin del mundo’, 2016), Arnaud Desplechin (‘Les fantômes d’Ismaël / Ismael’s Ghosts ‘,’ The ghosts of Ismael ‘, 2017) and Leos Carax, with whom he has just starred in’ Annette ‘(2021), an “unclassifiable musical” that recently opened the official competition of the Cannes Festival.

“A firm defender of the preservation of the environment, the actress is also a co.producer of ‘Bigger Than Us’, a documentary by Flore Vasseur produced by Denis Carot, from the Eizévir company,” according to the same sources.

This film, which gives a voice to committed youth, can be seen in San Sebastián as a Donostia Prize Special Screening on Saturday 18 September at the Victoria Eugenia. Previously, it was programmed at the Cannes Film Festival together with other titles aimed at raising public awareness regarding climate change and its environmental impact.

On the other hand, on Sunday, September 12, tickets will go on sale for the award ceremony to Cotillard, which will take place during the Festival’s opening ceremony (September 17) and will include the screening of the short ‘Rosa Rosae’. ‘The Civil War’, by Carlos Saura, and the feature film ‘Yi miao zhong / One Second’ (‘One second’), by Zhang Yimou.