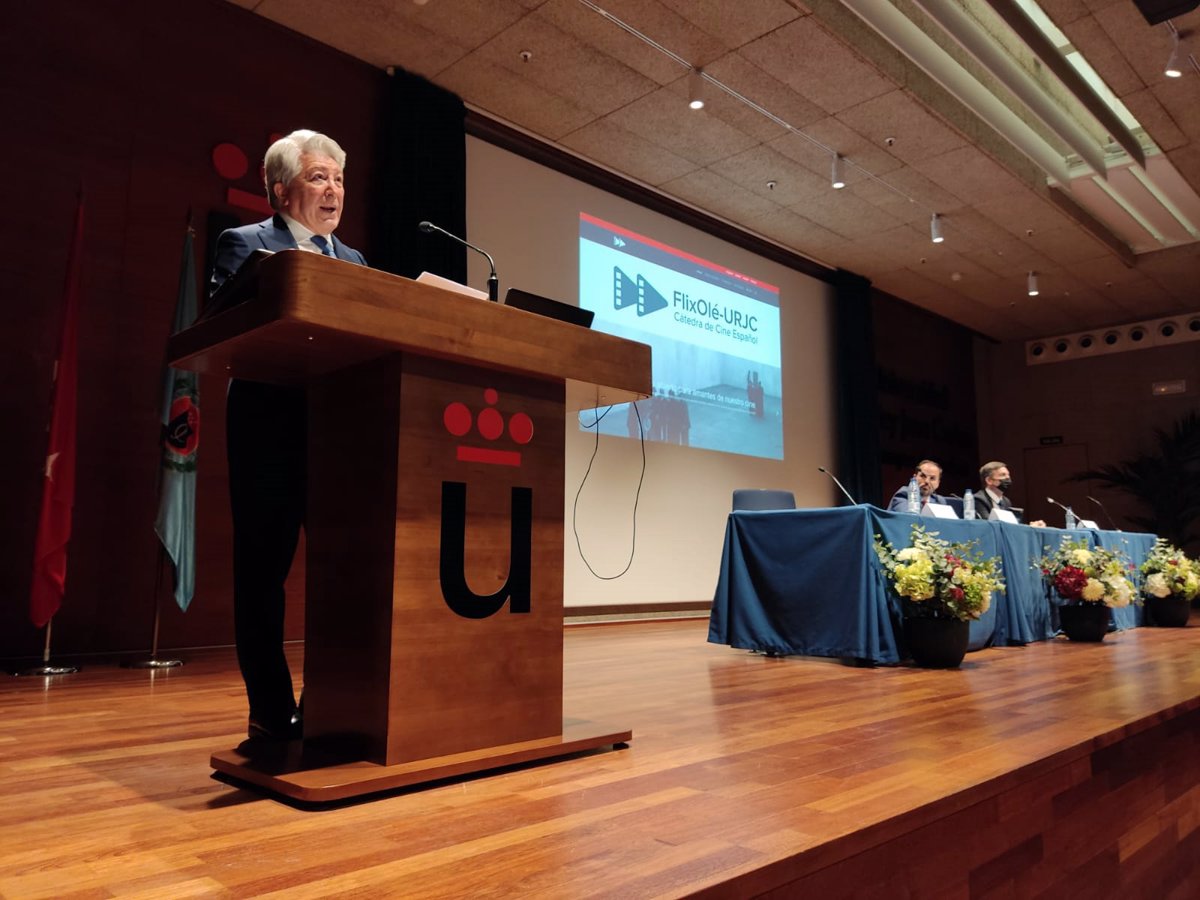 The founder of FlixOlé, Enrique Cerezo and the rector of the Rey Juan Carlos University (URJC), Javier Ramos, presented this Friday the ‘Catedra FlixOlé-URJC de Cine Español’. An initiative born with the aim of “add value through Education” the valuable “audiovisual heritage of our country”, as stated by Cerezo himself during the event held in the Assembly Hall of the Vicálvaro campus, which later hosted a cineforum on ‘Arrebato’the cult film written and directed by Ivan Zulueta.

The ‘FlixOlé-URJC Chair of Spanish Cinema’ born with the aim of promote Spanish culture and audiovisual heritage in the new generations through training and research. Thus, and under the premise of publicizing the country’s varied and extensive film work, the recently created chair contemplates a broad program of academic, artistic and commercial activities.

These actions include the launch of congresses and seminars, as well as the organization of film forums that will include the participation of relevant figures from the film scene. In this sense, in the presentation Cerezo has highlighted the importance of this project, which “It supposes the enhancement of Spanish cinema through Education, one of the backbones of culture in general, and of the film world in particular.“.

“You are the ones who will move us with your film stories. The chair arises with the aim of accompanying you in the process of audiovisual training that you have begunand we do it with this pioneering project on a national level”, said the founder of FlixOlé addressing the university students.

In addition, Cerezo has highlighted that this initiative will allow “visit and revisit the audiovisual heritage of our country, which will undoubtedly favor and promote the creation of new content while it will serve to preserve the history of the Spanish seventh art”.

For his part, the rector of the URJC, Javier Ramos, has pointed out that the initiative “tries to train, with possibilities within the reach of few, the new generations of filmmakers, communication professionals or screenwriters”. In this sense, Ramos thanked FlixOlé for its commitment: “We believe that ‘The lucky star’ has brought this agreement that we have just signed“.

A CHAIR WITH ITS OWN GALA

through the ‘FlixOlé-URJC Chair of Spanish Cinema’ Lines of study aimed at enhancing the value of national productions will also be promoted, encouraging the participation of researchers, teachers and students. In this sense, the platform and The university has planned the celebration of a gala that rewards those works whose thematic axis is related to the Spanish seventh art.

Likewise, the collaboration agreement signed by both entities contemplates the access of URJC students to the list of films, series, documentaries and short films that FlixOlé has in its catalogwhich in turn will allow the integration of university students in the chair.

It will be chaired by the teacher assigned to the Department of Audiovisual Communication and Advertising, Mario Rajas Fernandez and by the CEO of the FlixOlé platform, Sophie de MacMahon. The work team will be completed by a group of researchers made up of professors and professors from different academic fields.

After the chair’s inauguration ceremony, and within the framework of the activities to be carried out by it, the URJC space has hosted the screening of ‘Arrebato’, the cult film par excellence of Spanish cinema directed by the filmmaker Iván Zulueta and that, starring Eusebio Poncela, follows in the footsteps of José Sirgado, a young film director addicted to heroin who has finished his second film and, in the midst of a professional, personal and sentimental crisis, feels deeply dissatisfied.

The screening of ‘Arrebato’ has given way to a colloquium in which the teacher and filmmaker, Luis Deltelland the dean of the Faculty of Communication Sciences, Rafael Gomez in a round table moderated by the URJC professor, Fernando Hernandez Barral.

The rapper TopGunn has put his apartment up for sale, and he is worth several million kroner in profit