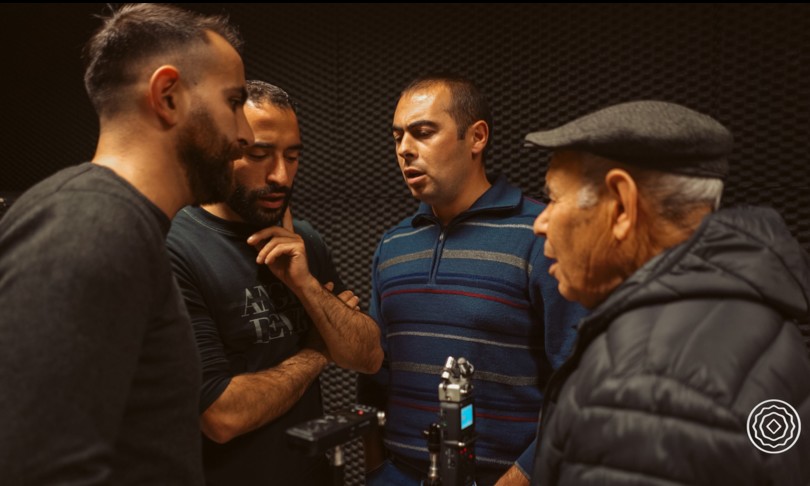 The musical culture of canto a tenore, handed down by oral tradition in the agro-pastoral world of Sardinia, it is no longer the exclusive expression of ‘Pastoralism’. Of the approximately 3,500 singers, registered in almost 100 towns on the island, shepherds are only 10%, overtaken by workers (18%) and clerks (14%), and flanked by artisans (10%), retirees (10%) and students 7%.

So intimate in the need to join in an embrace while intoning it, this chant is practiced spontaneously also by the boys while they wait for the bus to bring them home from school, in impromptu poetry competitions and a corollary of the rites of religious holidays.

Among the lovers of canto a tenore, so unique that it was declared an intangible cultural heritage of humanity in 2008 by Unesco, the level of education is also growing: 42% have a diploma, 15% have a university degree, while 6% have a professional qualification. 93% of the singers speak in Sardinian, 55% write it and 22% compose poetry, while 33% know English, 22% French, 12% Spanish and 3% German. 73% have Sardinian as their mother tongue.

To reveal l’identikit god ‘tenors’ sardine concentrated in the heart of the island, between Orgosolo (280), Nuoro (253), Oliena (236) and Barbagia di Ollolai (784), is a study by the Isre- Regional Ethnographic Higher Institute of Sardinia.

The evolution of the ‘tenores’

The census was entrusted to two large associations of Sardinian singers – ‘Tenores Sardegna and’ Boches a Tenore ‘ – who collaborated with the ethnomusicologists Luigi Oliva and Sabastiano Pilosu. Over the last few decades, canto a tenore has evolved following the profound economic and social changes in Sardinia. Now men of all ages, classes and levels of education practice it, from the shepherd, to the doctor, from the worker to the teacher..

With their unmistakable song, rich in guttural sounds that seem to come from the depths of the earth, the singers evoke archaic atmospheres, which immerse the listener in scenarios of indomitable nature. In their communities, the ‘tenores’ are often true celebrities, and the tourists who have the opportunity to listen to them on the stages and in the squares of the summer events adore them.

The census is part of the ‘Modas “project, a term that in Sardinian represents the plurality of local expressions that characterize canto a tenore. The basic rules of the practice remain the same everywhere – four voices, one of which is a soloist who sings the verbal text, while the chorus of the other three voices, which in Sardinian is called ‘tenor’, recites the characteristic nonsense guttural sounds – but each country can characterize them in its own way.

These personalizations of the types of songs, fragments and melodic timbres are the characteristics that embellish and make unique the different declinations of canto a tenore on the island. The ‘Modas’ project, born from collaboration between l’Isre and the cantori a tenorehas as its objectives the study, preservation and promotion of this musical practice so unmistakable and loved even outside the island.

It resulted the most important investigative work on canto a tenore conducted to date: four years of studies – interspersed with forced suspensions due to Covid – which led to an in-depth audiovisual documentation, an ethnographic research in ten different countries of the historical area of ​​canto a tenore.

At one time the most frequent contexts were dinners with friends, the bar (‘su tzilleri’), the private cellars (‘sos magasinos’), the streets of the historic centers and the squares, sometimes the churches and sacristies. But now the polyvocal song in which the guttural ‘bassu’, ‘contra’ are intertwined with the ‘boghe’ of the soloist and with the ‘mesu boghe’, they resonate mainly during rites and village festivalson the stages of folk evenings and in song reviews, on the occasion of rehearsals by organized groups, in high school courtyards, on local radios and TVs that host tenors and singing groups.

The hug that erases the differences

“The first, great novelty that emerges from the questionnaire is that canto a tenore cancels social differences: doctor, pastor, student, they sing together in a single embrace”, Diego Pani, technical-scientific manager of the project, tells AGI. “And the figure of 3,488 tenors identified by the census, although obtained with scientificity, is underestimated, given the spread of the culture of singing a tenore in certain areas of central Sardinia, thanks to its popular and spontaneous character”.

The first phase of the work led to the birth of a Network of singing a Tenore and to the collection of an enormous amount of documentary material, available on the website www.a-tenore.org, which leads to the second part of the project: that of returning to the territory, with days of singing, exchange and discussion, entirely dedicated to community and above all aimed at bringing the practice back to countries where it is disappearing. “But the fact that canto a tenore is so widespread among young people “concludes Pani, “it can only be, for us, an element that bodes well for the future”.