“We are the orphaned grandkids of a legendary narrative.” 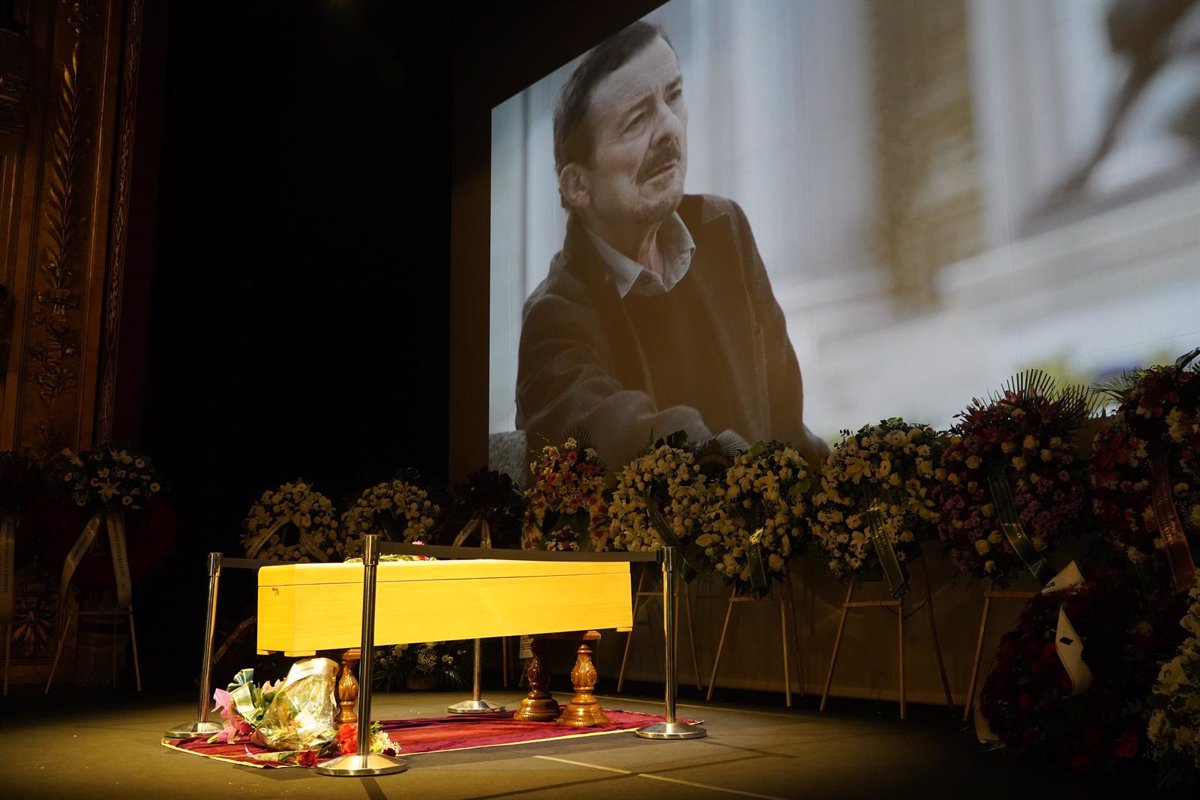 Actors, relatives, and citizens have been visiting the burning chapel set up in the Spanish Theater in honor of the actor Juan Diego throughout the morning, leaving signs of affection and respect for a figure who, in the words of Javier Cámara, was “the son of legends” and leaves a “orphaned” generation.

“He was a member of a family that is coming to an end, of that 1960s saga that has left its stamp on us all, and we are all missing from that family.” He is one of his family’s last members, a man who has worked alongside legends. As a result, he is the son of those tales. And now we are the grandchildren, and we must continue to be orphans while carrying on his legacy: a great deal of dedication to his profession and the organization,” he told the journalists during his visit to the burning chapel.

The death of Juan Diego is felt by “everyone very much” in reference to “the entire profession and many people,” according to the Chamber, since, as he recalled, “He was a fantastic, fascinating guy, not just as an actor, but also as someone who was committed to his vocation and to others.” He was “truly a brilliant guy on the set,” he continued.

“He was a terrific and good guy, well, you only have to look at the love we have for him and the example he has left,” Cámara said, declining to recall the “many” anecdotes he had shared with Juan Diego. “I’ll tell them when a few months have passed,” he said, adding that he was “a guy who behaved well, magnificently, and generously on the set,” as he claimed.

Cámara also said that they communicated since they shared a representation (Paloma Juanes), and they were aware that “he was a little more pachucho, but not that it would be that fast.” “Juan had many lives, he was a man who lived life in a very tremendous way, he was a great man,” he said.

Beyond ‘The Innocent Saints,’ where he had his first major role, he has alluded to ‘Bicycles are for Summer,’ or ‘The Stunned King,’ in short, “beautiful films he has made with great masters,” not to mention the theater.

Gabino Diego, who played Juan Diego in ‘El Rey Asmado,’ also wanted to pay respect to him, describing him as “a buddy, a fantastic companion, a great performer, and a very nice guy.” It has been acknowledged that “we all learned a lot from him.”

According to Cámara, he was part of “a generation of performers that no longer exists,” but that “we have to move on and continuing producing and remembering Juan.” He has stated that he will say farewell at the theater with the event this Friday, as he will be unable to do it in person.

Juan Diego, on the other hand, has been characterized by Carmelo Gomez as “the greatest actor” he has ever met, whether on stage or in front of the camera. “If such a clear Andalusian is born, so filled in adventure, it will take a long time to be born.” He quoted Lorca’s lyric and said, “I sing the elegance of him with words that moan.”

Gómez joked that he was an Andalusian who “always wanted to live in Madrid,” that he was committed “to everything and everyone, with immense empathy and numerous inconsistencies,” and that he died “in solitude.” In any event, he has stated that he had “a role in his hand till the very last minute, he was a hard worker with a natural gift.”

Similarly, an emotional Juan Echanove, who says, “Juan Diego was a first actor, and among the first actors, the greatest for me.” In terms of his impact on the profession, he has claimed that he gave it “dignity, class consciousness, and taught the importance of interpreting beyond color.”

“His films are meaningless to me since my recollection is so clear.” Because Juan Diego decided to look at me and become an actor, I exist, and now that he isn’t, that’s why I live and that’s why I’m going to enter theaters with the dignity that he taught me,” Echanove said, emphasizing that the actor “was clinging to life until the last moment.” He continued, “All those who have been fortunate enough to come across him live a better life.”

“Coming to this is awful, it’s been a stick,” actor Fernando Chinarro said of the deceased, who he described as “a lovely person and one of the finest performers.” “John, we love you,” he exclaimed, repeating a “very thrilled” Javier Conde’s message of affection, because Juan Diego is the godfather of Estrella Morente, his wife, who considers him her father. “Is our godfather a genius with so much bullfighting with life, with magnificent of those incredible artists,” the bullfighter remarked, lamenting the departure of “so many great people.”

Mara José Goyanes, with whom she had a cast in ‘Don Juan Tenorio’ on two occasions, remembers Juan Diego as “extremely charming and funnyalways making jokes,” as well as “quite Andalusian” and “having a beautiful accent as soon as he left the stage.”

Juan Diego was “the most versatile actor” he had met, “capable of working with any accent,” while Paco Clavel recalled that he was “a supercaring person and very committed to the left,” in addition to “a great actor, that everyone knows,” for which he has assured that his loss means “a slump” because “he was very young and talented.”

ACTIVE TALENT AND ACTIVISM IN ACTING

Other notable figures include Ana Belén, Victor ManuelPastora Vega, and director Natalia Menéndez oeThe president of the Spanish Film Academy, Mariano Barroso, has stated that Juan Diego was “a reference for all actors” and that “a large part of the advances of recent decades” in the industry can be attributed to his contribution. “It was a reference for the actors and an example as a partner,” he continued.

“His brio in his work and performances brought things to life, and he made it evident that his passion for acting was not incompatible with the defense of social rights.” “He combined acting talent with activism and made it into a symbol,” Barroso said, recalling his recent involvement in the Academy’s Mario Camus tribute. He went on to say, “They’ll be doing the second part of Los Santos Inocentes.”

“Knowing and working with him has been a pleasure.”

For his part, he remembered Marisa Paredes, underlining “their battle, their claims that were everyone’s” and “that force, whoever was behind it,” alluding to the dictatorship’s role. “He was a life teacher,” it has been decided.

Unai Sordo, the CCOO’s general secretary, has also alluded to his devotion, saying that he was a “key” figure in the 1975 actors’ strike and that he always made a show of joining the CCOO.

“He was a committed artist to the society in which he lived: we are saddened, and we have come to pay tribute to his work,” he ended.

Adán Ruz, his eldest son, has expressed gratitude to the media for the “respectful” coverage. “I believe my father would be pleased with the coverage you have provided,” Ruz stated on behalf of the family, which will hold a private ceremony in El Escorial (Madrid) where he will be cremated.

Throughout the morning, a steady stream of individuals, both known and unknown, visited the funeral chapel set up in the Spanish Theater in honor of actor Juan Diego, who died on Thursday at the age of 79. The stage has been flooded with Star Morente’s music and has been decked with projections of his images and several wreaths and bouquets in his honor. Around 2:00 p.m., the smoldering church was closed with the departure of the coffin, which was greeted with clapping and raised fists.