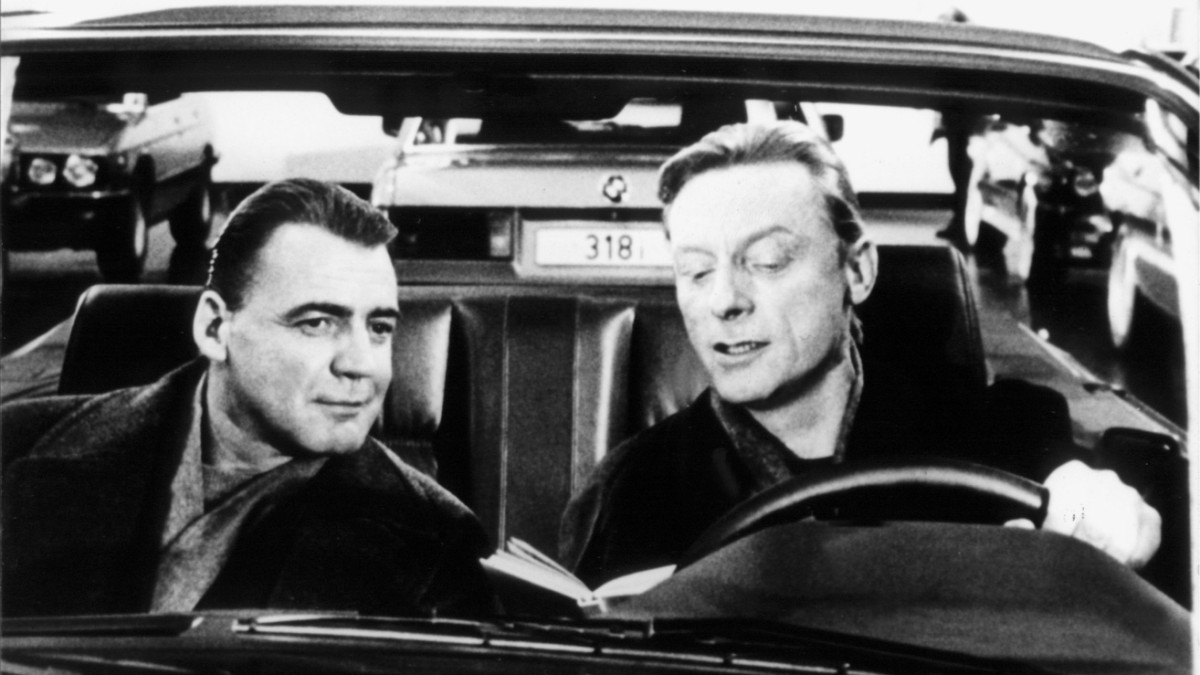 Peter Handke has dedicated his new book, no: Büchlein, to the actors Otto Sander and Bruno Ganz. It is therefore these two that one has in mind when a dialogue between two “special fools” unfolds in the eponymous “Zwietalk”. It doesn’t matter that they’re both dead. Weren’t Sander and Ganz two very special otherworldly people while they were still alive? You can still imagine them as the angels Cassiel and Damiel, who are friendly towards people and who they played in Wim Wender’s film “Der Himmel über Berlin” (1987), albeit chatting instead of just listening. Handke was involved in the screenplay at the time, for example contributing to the philosophical-poetic “Song of Childhood”, the lines of which have the power to be life companions (“When the child was a child / it didn’t know that it was a child / everything was animated him, / and all souls were one”). Sander and Ganz had previously acted in the premiere of his play “Der Ritt über den Bodensee” (The Ride across Lake Constance), which was in 1971 at the Berlin Schaubühne, directed by Claus Peymann.

At the time, Handke was the wild youngster of German-language literature, a pop poet and theater revolutionary. Now he is a Nobel Prize winner for literature at an advanced age – he will be 80 in December – and his style is sometimes that of a guru, a strange linguist and nature-loving eccentric, literally versed in the neighboring villages, the mushroom forests, the landscape studies of the no-man’s bays. As is well known, Handke walks a lot – and indulges in it in literary terms.

“No more serious seriousness than in serious play.”

The new “Zwietalk” presented on not even 70 pages is again a trek through fields of language and memory, written in the typical Handke-Speak in a noble, sensitive, sometimes: swollen poetic tone and coquettish colloquial breaks, puns, snapped. It’s not for everyone, and it doesn’t have to be for everyone. But anyone who has always liked to accompany Handke on his winter journeys through the villages and through Moravian nights in the footsteps of the lost inland or to the edge of the country road will stay on his trail here too, will trundle after him in the Linguistic River, here and there pause there, pause, listen – without alienating too much.

Because this consciousness walk, which comes along as talk, leads to familiar territory, already known, the author might add in English at this point. He occasionally makes such sudden English (or other language) expressions, suddenly. They are bold signs of global online cosmopolitanism – against the suspicion of language shamanism – but also a gain in terms of sound and rhythm. After all, there is music in Handke’s text.

This includes repetitions. The variation of earlier themes and motifs. allusions to his own work. Sometimes self-deprecating: “Did I already tell you that?” The answer: “Twice, if not three times.” Then the first again: “Yes, that’s how it is with telling stories when you get older.” They’re quirky, the two friends with their “knowledge of words”. In addition to extravagance, your exchange speech also has potential for a smile. If, for example, one of them rants about the swarming and hissing in the streets of the city, with all the “boys and young players” there, the “grouped people”, among whom he feels helpless as the only one “truly walking”, then he ends his report with the sentence: “But my horoscope said: ‘You are irresistible today’https://www.sueddeutsche.de/kultur/.” Laughter in the audience.

From the start, this prose dialogue focuses on the theatre, this “special fool’s box”, the ancestral domain of the actors Otto Sander and Bruno Ganz. “Enough looking into the void now,” it says right at the beginning, as if an expectant spectator were speaking from the floor. One dialogue partner is also a theater person. He recounts a performance he once saw at school as a child, with a house on the stage as part of the set. It is this “dream house”, this “children’s theater house” that has been representative of all his expectations of the theater ever since. Linked to this is this primal hope that a person will emerge, “and a unique one, one that I have never seen before”. This expectation that “all the doors and windows will spring open and – and – and -” he breaks off and the other one adds: “- that it’s getting serious?” Yes, says the theater lover, “serious at last,” but also playfully serious: “No more serious than in a serious play.”

The tones he strikes here sound age-gentle – or: age-wise – self-aware

It’s clear that he was disappointed in this hope, as in the theater in general. Because the “holy times” in which life “appeared” in the theater (yes: appeared), there was still language and silence in the theater and the “holy terror of this silence” are over. The theater has “lost its momentum”, states the art lover, but “the sister art film” has also “lost its momentum” as a result. It is a statement without bitterness. A finding. But the longing has remained, and on his walks he repeatedly comes across the archetype of his school theater house, be it in the form of an old field barn or a cemetery house with a gable (“nothing more after work than a gable like that!”), and in his mind he stages it there sometimes a whispering pair of lovers enter.

The other, the friend who never felt responsible for tragedy, follows other paths in his memory, namely back to his grandfather, the once revered, idealized, who as a young man fought in the Battles of the Isonzo in World War I (in today’s Slovenia) was there and later told his grandson his lies. A grandfather, who in the Ostmark was obviously also an enthusiast of the Third Reich and its “false language”, afterwards acting as a “seduced man”. In his own way, he too: a player. And a sadist, an animal abuser. The descriptions of how he impales a snake with a rake and mortars a hornet’s nest in a hollow tree go deep.

Before Handke begins to settle accounts with “grandfatherhood,” he warns: “Political issues are threatening.” To what extent he refers back to his own ancestor and to his own political delusion and transfiguration (“hopeless – hopeless – hopeless”) is an open question, the connoisseurs or everyone can decide for themselves, at least the tones he strikes here, sound age-gentle – or: age-wise – self-aware. In any case, this platonic “dialogue” about becoming, going and passing away is an old work in the best sense of the word. Also insofar as it draws a bow from the school child to the old and very old and even peeks into prams to end in a confident, defiant restlessness, an “eternally young”.

One thought on “Peter Handke’s “Dialogue””