At Milan’s Arco della Pace, a massive statue has appeared 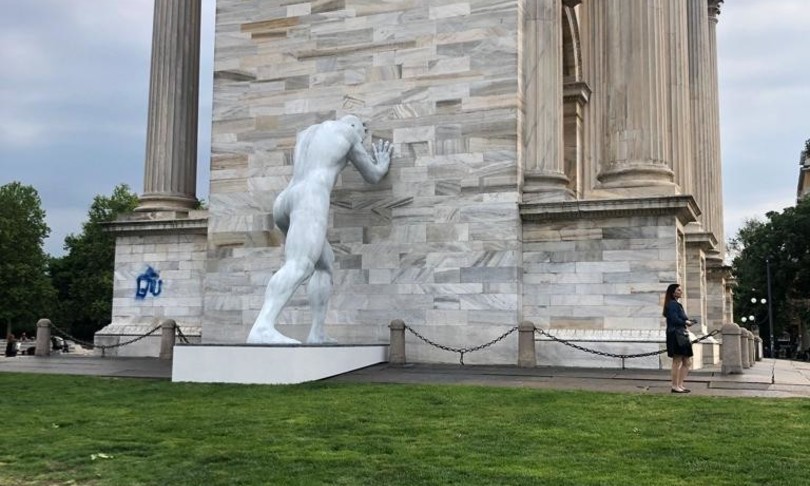 At Milan’s Arco della Pace, a massive plastic statue has appeared. Mr. Arbitrium, a massive masculine figure of around 6 meters tall and naked, was created by Emanuele Giannelli, a Roman artist who later moved to Carrara. Mr. Arbitrium arrives in Milan after a long journey across his Tuscany. Is it pushing or holding? It is unknown; like its name, it was chosen at random.

And this act might have numerous meanings, according to the author, such as clinging to history, classicism, and tradition, as evidenced by the figurative style and detailed and realistic representation of the human figure. Or perhaps go away from it all, groping to free yourself from the weight of so much beauty, returning the too many conditionings of a glorious but equally burdensome past.

“The sculpture is designed with all of the muscles tense, either supporting or pushing the structure away in a decisive manner,” Giannelli explains. My project’s goal is to experiment with this ambiguity, and the notion that underpins my work is hidden in the double meaning of this action. In a historical period marked by great changes and ever-faster rhythms, such as the one we are experiencing, this dilemma, in my opinion, exists, forcing us to choose between sweeping away the Church or historic buildings, symbols of institutions, of history, of past culture and tradition, or supporting and defending the Church, our millenary history, and the symbols of Western culture.

“The future, in my opinion, is already quite close: science has been suggesting and talking to us about robotics, neurotechnologies, stem cells, cloning, controlled digital firms, and so on, every day and for some time.” Each of us will be asked to choose between two possible paths: “push” or “support.” Each of us will field our own “I,” operating in accordance with our strengths, skills, and, most importantly, our conscience. The idea that the protagonist is no longer sculpture, but ourselves, all of mankind, emerges at this point. Various “I’s” led to those decisions, as well as many similar or dissimilar interpretations, in the hopes of avoiding misunderstandings, misconceptions, or evaluation errors. The future and man will pass from here, at least in my vision “.

“I am delighted to be working with Emanuele Giannelli again,” says critic Luca Beatrice, who has followed the artist’s career for many years. a visionary sculptor, eclectic, a person with many cultural interests, highly stimulating and attentive, who has freed himself from the constraints of his own vision in colossal work, from the belts that held him fast, from the power of gravity. Giannelli is now widely regarded as one of our generation’s most interesting and comprehensive sculptors. Above all, in him, the work does not exist in isolation, but rather engages in a deep interaction with many types of knowledge and modern culture.”

The process that lead to Mr Arbitrium’s creation is fascinating. The initial step entails the artist creating a clay sketch, which is then converted into a scan and delivered to Giannelli’s collaborator, Viareggio tank driver Luigi Bonetti, for robot-assisted polystyrene processing. The sculpture is reinforced with iron and secured to the structure’s foundations.

Because the robot achieves up to 90% accuracy, the artist must intervene again to redefine numerous features, particularly those of the face, hands, and feet.

One thought on “At Milan’s Arco della Pace, a massive statue has appeared”