In Geneva, the largest white diamond ever auctioned 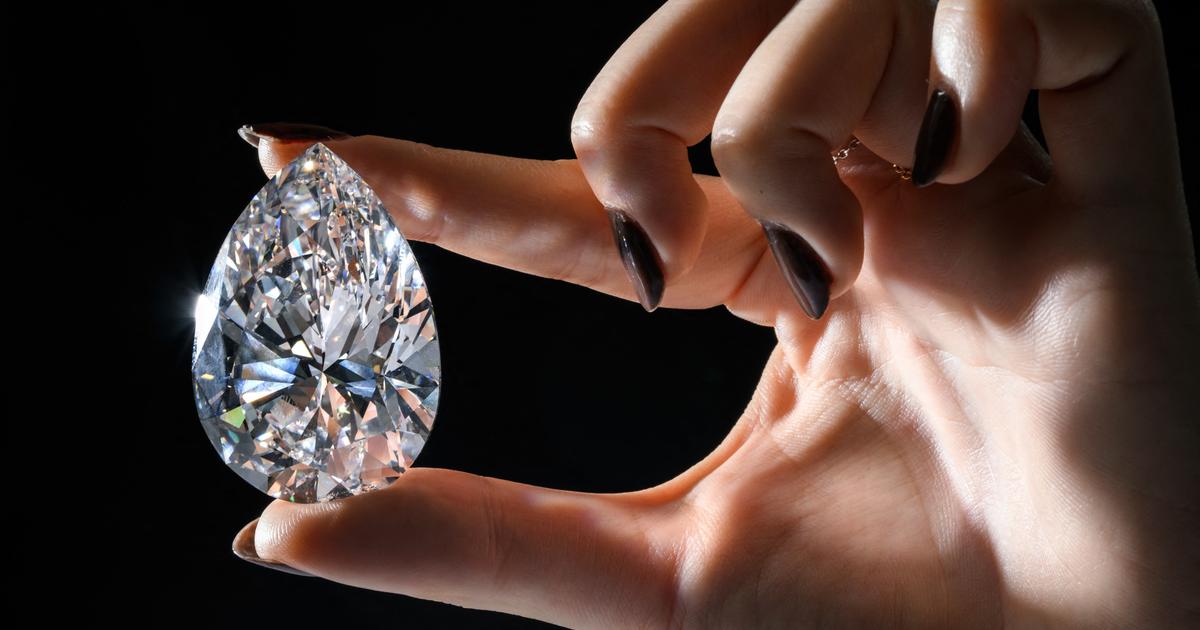 Estimated between 20 and 30 million Swiss francs, “The Rock”, the 228.31-carat precious stone, will be auctioned on Wednesday May 11. Part of the profits will be distributed to the Red Cross.

The largest white diamond ever put up for auction will be offered next Wednesday in Geneva, alongside a historic canary yellow diamond, part of the proceeds of which will go to the Red Cross. With 228.31 carats “The Rock is the largest white diamond ever offered at auction. This is a truly exceptional pear cut diamond.Max Fawcett, head of the jewelery department at Christie’s in Geneva, told AFP.

The price of the gemstone, whose owner is from North America but who remains anonymous, could reach record highs. “It is perfectly symmetrical. It is estimated between 20 and 30 million dollars, and I expect an explosion of bidding”, Fawcett said. According to the expert, there is only one “handle” diamond of this ilk. The last record obtained by Christie’s for a similar white diamond (163.41 carats) brought the stone to 33.7 million dollars during a sale in November 2017 in Geneva. «The Rock»whose height exceeds that of a golf ball, was extracted from a mine in South Africa in the early 2000s. It was then sold by Christie’s in an over-the-counter sale to a private collector.

Bidders may also attempt to acquire on Wednesday «The Red Cross Diamond»a 205.07 carat cushion-shaped canary yellow diamond. “It is estimated between 7 and 10 million Swiss francs. I expect him to achieve fantastic results when selling. Much of the proceeds from its sale will be donated to the International Committee of the Red Cross.Fawcett said.

The original gem was mined in 1901 at a De Beers company’s South African mine and is said to have weighed around 375 carats, according to Christie’s. As well as ranking among the largest diamonds in the world, a striking feature of the stone is its pavilion, which is naturally faceted in the shape of a Maltese cross. On April 10, 1918, the stone was first offered for sale at Christie’s in London by the Diamond Syndicate, to benefit the British Red Cross Society and the Order of St. of Malta).

At the time, the diamond was sold for 10,000 pounds (about 600,000 pounds today, or more than 700,000 euros). It had been bought by the famous London jeweler SJ Phillips. On November 21, 1973, it was put up for sale again at Christie’s in Geneva, for 1.8 million francs. It is now offered for the third time by Christie’s. The seller wished to remain anonymous but released this statement: “For nearly half a century, our family has had the privilege of keeping the Red Cross Diamond. (…) At this auspicious moment in history, we honor the call that others have made before us”.

Several other diamonds will be offered on Wednesday, as well as a tiara that belonged to the Princess of Fürstenberg (1867-1948), a member of one of the most important aristocratic families of the Habsburg Empire. Its price is estimated between 400,000 and 600,000 francs. “The diamond market is incredibly robust this year. The geopolitical situation has been difficult, there are inflationary pressures and diamond prices have not been so high for seven or eight years.explained Max Fawcett.

The Russian invasion in Ukraine has a major impact on this market. More than 40% of diamonds are mined in Russia, including the Alrosa mine, but international markets no longer have access to Russian gems, he said. The conflict has “significant repercussions due to this strong restriction of supply in the current market, by creating strong price increases”, said the expert. And he expects the continuation of international sanctions against Russia “keeps the prices going up”.

One thought on “In Geneva, the largest white diamond ever auctioned”