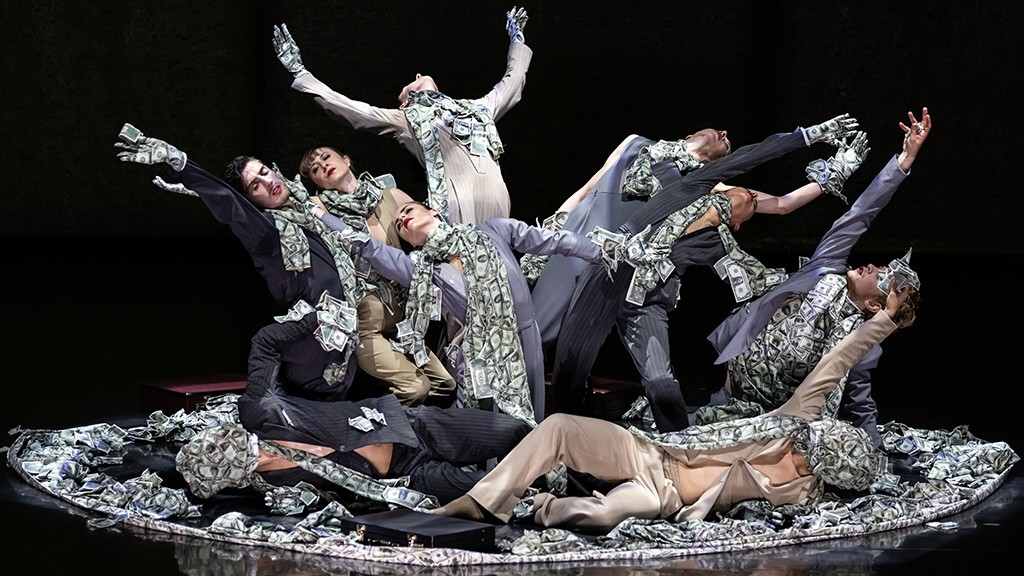 The world is out of joint. But the dance likes to pretend that the beautiful, the true and the good are within reach. The classic “Raymonda” has just been relaunched in London and Amsterdam, with a lot of taste, a lot of money, a lot of glitz and glamour. It’s about crusaders, Christian values, chaste virgins and all the holy hoopla of an age in which the spirit of enlightenment had not yet appeared. The choreography from 1898 is grandiose, but does the opulent subject fit into the 21st century beyond museum references? Anyone who has seen how one of the most threatening backdrops of the medieval church at the Stuttgart Theater is brought down with today’s dance equipment may doubt that.

At the house on the Pragsattel Gauthier Dance portrays “The Seven Sins” with the means of contemporary dance. The same instruments are used the following day in the Freiburg Theater, where Gogol’s “Revisor” is making a guest appearance: a tour de force staged by Canadian dance maker Crystal Pite and her ensemble Kidd Pivot. Just like the Stuttgart Mosaic of Deadly Sins, this German premiere also shines: stylistic variety, idiosyncratic handwriting, analytical sharpness and aesthetic appeal go hand in hand here and there.

Eric Gauthier, who was inspired by David Fincher’s infernal cinematic thriller “Seven”, has entrusted the panorama of vice to seven different choreographers. They have tailored contemporary haute couture from the finest movement materials to the well-trained bodies of his troupe. Sidi Larbi Cherkaoui, soon to be head of the Geneva Ballet, starts with the shameless embarrassment of all greed. Halfway civilized figures are transformed into mammon marionettes, for whom banknotes become their second skin, suit, hood and scarf. A thoroughly corrupted collective, followed by two gentlemen mired in inertia, which Aszure Barton’s choreography finally abuses with a joyless masturbation scene. Nothing moves anymore, while the five Graces, which Marcos Morau draws in the “Pride” episode as a mixture of picturesque Hodler sirens and arch-Catholic nuns, don’t stand still for a second. Open your arms, shave your thighs, purse your lips: posing together, as if the GNTM jury were sitting in the parquet. Which, however, should never have seen such a mix of precision, perfection and perfidy.

Sasha Waltz observes people as if under a microscope

Gluttony is a lonely business and, staged by Marco Goecke, lives in its own physical prison. Hofesh Shechter lets a white-robed teetotaler crew sip their lust, Sharon Eyal wraps envy as an elegant trio of women, as decorative as they are subliminally aggressive. In between lies the highlight of the evening, a pas de deux by Sasha Waltz. The Berlin choreographer observes people as if under a microscope and dissects their behavior with surgical accuracy. She ruthlessly lets two performers attack each other until their anger knows no bounds. The way one casually smashes the other and increases their anger immeasurably reflects the genesis and escalation of conflicts – and the blindness of a frenzy, the catastrophic consequences of which we are currently lamenting in Mariupol or Kramatorsk. Sasha Waltz doesn’t complain and she doesn’t accuse. But we put the foil of our own experience, our knowledge over the pictures and thus connect them with the reality of 2022.

Crystal Pite’s one-and-a-half-hour “Revisor” works the same way, created in 2019, but only now on tour because of Corona and now a guest at the Theater Freiburg. Pite is the choreographer Eric Gauthier has been trying to get to work with his ensemble for years, so far without success. After all, the fifty-one-year-old is in demand worldwide because she can illustrate narratives, negotiate abstracts and let the dance mysteriously shine. Pite also confidently juggles Gogol’s unveiling farce about a civil servant who is supposed to scout out scandal and corruption in the provinces but is in fact a nobody. He is promptly taken in by the local potentate and his collaborators, until the gentlemen have exposed themselves to all the rules of a bilious art of comedy.

Pite pushes the story forward with all his might. The text, which the live (and gorgeous) dancing octet of actors simulates lip-synchronously, comes from the off. The plot is exposed for half an hour, then choreographically condensed and finally assembled. As with Gogol, the small-town dwellers and the supposed representative of the state apparatus collide: Here the morally depraved, power-hungry director together with his horny wife and subalterns, there the good-for-nothing whom fate has blown. Pite sketches the characters with a zest for the tabloid and yet looks into the abyss of their souls. An interlude turns into a psycho session that stirs up human rubbish until telltale words and scraps of sentences fall: “mass graves”, “executions”. It is clear which crimes are to be swept under the carpet here: 1835, the year the “Revisor” was created, coincides with our bloody present.

The Stuttgart Sin Puzzle and the Freiburg “Revisor” are a perfect match: both shed light on the human species after the Fall. Not a pretty sight, despite all the dance attractions. But a very insightful one.