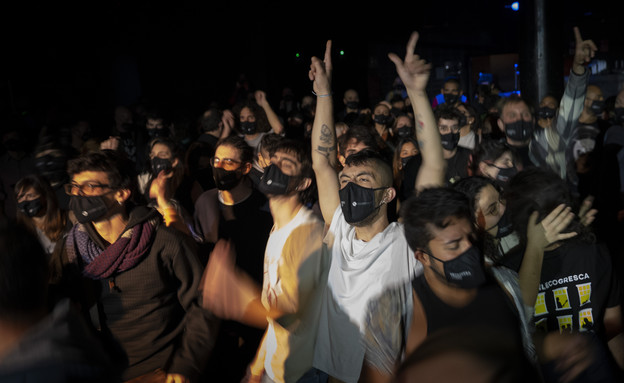 Braking the fourth wave continues to show positive signs and with the opening of the new year we were even informed of the reduction of the infection coefficient to a rate of less than 1%. Now alongside continuing the joint effort for a third vaccination for the entire population from the age of 12, the biggest challenge for all of us is to maintain a maximum routine life, which includes holding large events like shows, performances and festivals safely.

Only recently was verified revealed to Corona in a performance by Omar Adam and criticism was also leveled at the mass panjuia events in Eilat. Apparently it is not going to stop there, and Otto towards winter the need for creative solutions will even increase, to make sure that closed events do not become mass contagion parties.

Even during the period of closures, one of the areas that suffered the most severe blow was the field of culture. While restaurants and beauty salons were opened intermittently, theaters, cinemas and performance stages were consistently closed. Whether this is due to logical clinical considerations or narrow interests, there is no doubt that these guidelines largely also reflect the priorities of government decision-makers. An extraordinary initiative of the French government after the second closure there, proves that it is also possible otherwise.

The imaging technologies that brought the audience back to the halls

The Philharmonic de Paris Concert Hall has collaborated with the French technology company Dassault Systèmes. The company specializes in “virtual twin” technology that allows the creation of realistic three-dimensional models. The concert hall contains 2,400 seats, each with a personal ventilation system that flows clean air from the outside, and the direction and speed of air flow for each seat can be regulated individually. If you have seated thousands of people in a room with adjustable airflow, it sounds like a test recipe for mass infection – the data in the field shows a completely different picture. What will be absolutely true for almost any structure, becomes much more flexible precisely with the help of the possibility of introducing fresh air and anticipating the directions of air flow.

Data on the structure of the hall, the arrangement of the seats and the directions of airflow were entered into the advanced imaging software. The software created an accurate one-to-one model of the concert hall. The scientists created a variety of airflow scenarios in the software that may occur in space, and found that if the ventilation intensity in the seats is reduced by exactly 50% and the audience wears masks throughout the show, the same effect as an open-air show will be created.

How do you build a cough prognosis?

To further refine the predictions and build an outline that would allow for optimal safety, the scientists began to build additional simulations that resembled coughs and sneezes from different points in the audience. The system simulated the movement of airborne particles from the body of coughing and sneezing, and created a predictive model that can plan the seating arrangements in the world so that each occupant can with proper distance, masks and proper design of the ventilation system be completely protected from exposure.

This initial experiment laid the foundations for the outline of the return to routine of cultural institutions in Paris and eventually, led to the opening of the concert hall to the public. 3D simulations and augmented reality technologies made it possible to build a data-based model for sustainable and sane social distance guidelines. Now that the means are there, all it takes is just a will.