No bad publicity? An advertisement about endometriosis is outrageous 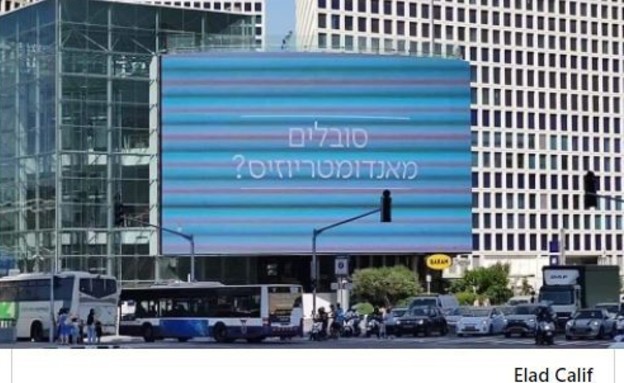 One in ten women experiences severe pain every month that paralyzes her, sometimes to the extent that it does not allow her to continue functioning. Abdominal pain, pain during intercourse, heavy bleeding, diarrhea, impaired fertility – these are just some of the symptoms of endometriosis and until recently it was a disease that is a classic example of the transparent treatment of female diseases in the eyes of medicine. There are reports in the world of about 20 men suffering from it and a very small percentage of trans men suffering from it. So it’s clear how annoying it was to come across a post by Shira Rafael in one of the professional creative groups, which featured a billboard by Saiki Medical, a cannabis inhaler company that is reportedly very helpful to the Endo Sands community. A video broadcast near Azrieli Towers, one of the busiest intersections in Tel Aviv, simply read: “Suffering from endometriosis?”

As a director of communities and marketing, my first reaction was that this is a sophisticated and groundbreaking campaign that appeals to the trans community in Israel, something unusually socially sensitive that highlights the difficulties that trans men face. But a brief inquiry made it clear that this was not a social sensitivity worthy of deception, but an exit that could have been almost comical had it not been so infuriating. A disease that the vast majority of those who suffer from it are women and here too, and perhaps it should be said, even here – we are erased from the language and are not approached directly.

I’m glad I’m not endometriosis, but as the saying goes, many of my good friends do. Imagine that pieces of your uterus travel in your body and take root in places where they should not be, causing you paralyzing pain and then you come across an advertisement for a product designed to relieve your pain and improve the quality of your life – and it addresses you in male language. In frustration, I posted on Facebook and wondered if we had reached a moment when we could say to men: “Walla guys, have you crossed any boundaries?”. From the many angry reactions it was clear that I was not the only one who felt this way.

The disease is transparent. The pains do not

The company had three options, all three excellent; They could have put up a groundbreaking campaign for the trans community and most likely the whole country would have been talking about them. They could address in multi.gender Hebrew to anyone and everyone (do you have endometriosis? Is the obvious example) and they could address most of the sufferers of the disease, women. Instead, they chose a strange and annoying solution – her face in the plural, which in standard Hebrew is written in a random male. But we in the academy for language and erasing women from language have implications for our gender equality, paving, generalization and feeling, as women, that someone will hire (or not hire) us.

Endometriosis like other diseases that suffer mainly from women, has been a transparent and muted disease for many decades. Women with terrible pain were labeled by their doctors as “hysterical” and “with low pain threshold”, the pain was defined as “psychosomatic” and diagnoses were obtained with an average of 8 years late in which the patient responded without treatment.

In March last year, the patients with endometriosis, which the Ministry of Health recognizes as a chronic disease, were informed. A long.standing struggle of organizations and short.term activity. But the Saiki Medical suffering of the sands, a history of medical silence, or sensitive social issues are not interesting. They after all have a sign near Azrieli Tel Aviv, and now really everyone is talking about it.

Nathalie Moon, is a community and marketing manager and owner of a smartfish agency

Masaiki Medical responded: Dear women, we apologize for the pain caused by the wording of the publication. Do not deserve it and did not mean. We do not believe that we actually missed it. Saiki’s Air Inhaler campaign came up with a wide range of diseases and syndromes and inadvertently, we did not notice a mistake in the wording. We apologize to everyone who was injured and wish a lot of health to everyone. And of course, a happy new year.