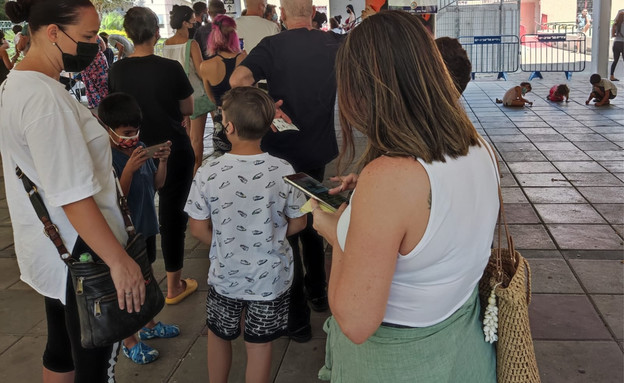 We also stood during the holiday (Monday) for two hours in the heat to do a corona test for Guy. And with us, there were endless queues of hundreds of parents of preschool and elementary school children.

Roy, who was standing in front of us, talked about his son who started first grade and a day later went into isolation. Shira said her daughter asks every morning if she can go back to class today. At this rate, she says, they will never learn. So is everyone. Desperate. Standing in an uncharacteristic order for Israelis and waiting for a pen.

And the kids, like kids, are running around. Some found chalks and started painting on the sidewalk. Others jump in the plaza, climb trees, play on Mom’s smartphone. For us it is sad, for them it is another day in the hallucination that has become the reality of their lives.

Less than a week after the start of the school year, over one hundred thousand students were sent to solitary confinement. The numbers, apparently, will only continue to rise. “The corona is here to stay,” the experts tell us, “and we must learn to live with it.” Meanwhile, our children’s lives are on hold.

There is no logic in a policy that sends dozens of negative children to isolation because of one positive child. The price of the existing policy is terrible. It hurts children, it hurts parents and it imposes huge costs on the economy. It is impossible to continue like this. It’s time to change attitude, to advance medicine to Mecca.

If the corona is here to stay, the children should be released. Instead of isolating them, check them out. Instead of responding to the corona, initiate a protective layer. We have to check on the kids non-stop. Once every three days at school. A child who is found positive – for isolation. All the rest go back to class. And that’s it.

True, this may increase exposure, but it’s worth it. Especially when you consider the low risk of serious illness among the children and their young parents most of whom are vaccinated.

A year and a half into the corona, let’s get the kids back to normal.