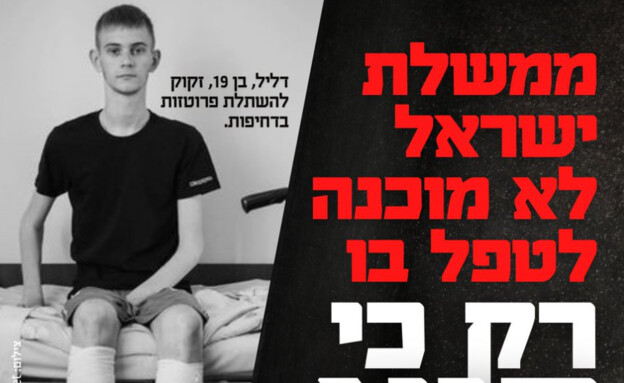 A storm broke out on social media in Israel, after the Ukrainian embassy in Israel launched a sponsored campaign criticizing the fact that Israel, contrary to previous promises, does not treat Ukrainian soldiers who lost their limbs in the war against the Russians. Contrary to the public outcry and although the official response from the Foreign Ministry included: “Wonder at the (sponsored) and very aggressive post of the Ukrainian Embassy. Especially in light of Israel’s mobilization to transfer extensive humanitarian and medical assistance to Ukraine,” In government ministries, internal criticism of government policy is heard.Israel is careful not to help wounded Ukrainian soldiers

In a conversation with officials in the Prime Minister’s Office and the Ministry of Defense, it was claimed that in contrast to the Israeli embargo on weapons for Ukraine, an “unjustified” humanitarian medical embargo was also created. Israel, it should be noted, sent a hospital to Ukraine and some medical equipment, food and generators. Contrary to her previous commitment, however, she is careful not to help wounded Ukrainian soldiers. Referring to recent requests, it also denies the aid of prostheses to amputated soldiers.

Many Ukrainians lost body parts in Russian attacks.
Israel is an international power in the field of prostheses. We expect the Israeli government to do the right moral thing and help dilute (pictured) and many other Ukrainians – get back on track. There is no justification for the continued delay in aid in this humanitarian field.
: @pdepoulpiquet pic.twitter.com/Zl52A53sGt

Government ministries criticized the Ukrainian campaign, especially the way it was carried out. However, many in those offices also went against the government’s policy on the issue. According to the same spokesmen, Israel is careful to assist citizens in the hospital established in Ukraine. However, a directive from Jerusalem instructed to prevent the treatment of Ukrainian soldiers as much as possible. “The decision at the moment is to block any assistance that will be deployed as direct support or assistance to the Ukrainian army, even when it comes to medicine,” a source in the Prime Minister’s Office said in a conversation with Mako Health.

“Right now we are not on the side of the good”

Sources we spoke to revealed that a number of requests had been made by Ukraine to receive prosthetic assistance and rehabilitation of wounded wounded soldiers. All of these attempts were halted. In addition, the Ukrainians are trying to send wounded soldiers to Israel, which they agreed on weeks ago and received approval from Jerusalem. Despite this, this too has not happened to date.

There are those in the Defense Ministry who think it is a diplomatic mistake: “After the war, the Ukrainians will take into account who came to my aid and who against me. As Israelis we must say that it is very clear that there is a side of bad invaders without justification. Of the good. ”