Under the Masa Doctors program, 250 medical professionals from the former USSR countries will come to Israel 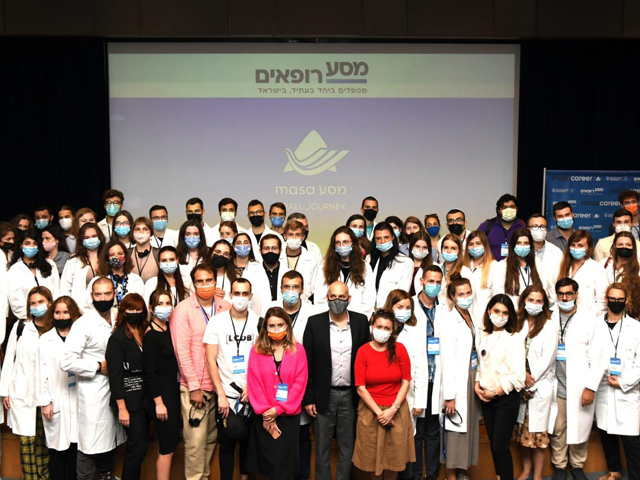 Approximately 100 participants in the Masa Doctors program from the former Soviet Union nations have finished their education in Israel and will soon take the qualifying exam.

Young doctors got Israeli passports (“teudat zeuta”) and diplomas on June 22 at the conclusion of the program in Beer Sheva. They will work at Israeli hospitals, clinics, and the IDF after passing the qualifying exam. At the occasion, it was also revealed that Masa’s flagship program would grow by 2.5 times the following year to include 250 doctors.

Dr. Alena Kotelnikova, a participant in the program, is from Kazakhstan and is 31 years old. She traveled to Israel with her daughter, who is 9 years old. “At first, it was really challenging; we studied the Israeli healthcare system while also studying Hebrew in-depth. It took a lot of time to study, leaving me with little time to focus on my baby. But I’m proud of myself for getting through this phase, and I know my daughter is, too. I’m delighted she has an easy time learning Hebrew and that she fits in well in Israel,” Alena says.

Married Russian couple Dmitry and Marina (28), who adopted the name Sharon. She is an expert in rehabilitation, while he is a neurologist. Together, we participated in the program. Both had positions in coronavirus departments during the coronavirus epidemic. We had an ambition of becoming doctors in Israel while we were in school. We are appreciative of the opportunity since our hearts told us that we should be here. People are genuinely free in Israel. My wife and I intend to work at the Soroka hospital in Beersheba after we graduate from the school, and I intend to get drafted into the IDF as a military doctor, according to Dr. Sharon.

Masa CEO Ofer Gutman: “It is a significant and strategic choice that benefits the Israeli healthcare system in particular and the state of Israel as a whole to expand the program to train more doctors from all over the world each year. Our graduates return home and work in clinics and hospitals as well as the IDF. We appreciate the support given to the Masa organization in general and the Masa Doctors program in particular by the government and EA Sokhnut.

For 18 years, Masa, an organization formed by EA Sokhnut and the Israeli government, has provided long-term initiatives in Israel for young people of Jewish ancestry. The program to prepare certified doctors for the Israeli healthcare system and the regional qualifying exam is one of the top initiatives and has been in place for 14 years. Due of a physician scarcity in Israel, the initiative was developed. As a result, due to the Masa organization, over 100 Russian-speaking medical professionals come to Israel each year to study, and about 90% of program graduates return home and join the community’s healthcare system. Approximately 1,000 new doctors have been included into our healthcare system since the program’s launch.

As previously said, it was agreed to considerably extend this program in the next year so that 250 doctors may take part in it on an annual basis.

One thought on “Under the Masa Doctors program, 250 medical professionals from the former USSR countries will come to Israel”