The secluded island that the Corona could not reach 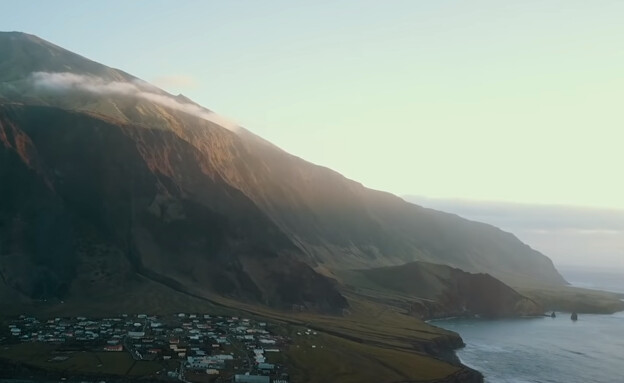 While corona cases have continued to rise across the UK in recent weeks, in what appears to be a sixth wave that has already reopened the debate over a partial reinstatement of restrictions across the country, in the British island of Tristan de Kona life over the past two years has continued “almost” as usual with zero corona cases so far.Elderly population and small medical center

The island of Tristan de Kona, which has been crowned “the most remote inhabited island in the world” is located in the middle of the Atlantic Ocean, halfway between South Africa and South America. It has about 250 inhabitants and can only be reached by a week-long cruise from Cape Town in South Africa.

Over the past two years no case of corona has been detected on the island, as a result of the strict policies adopted by the islanders. To this day the island does not allow visitors and all its residents and returning workers must be fully vaccinated. They are also required to be in isolation at a hotel in Cape Town for 10 days before performing a PCR test before departure. Also, if anyone is suspected of carrying the virus he is not allowed to immigrate to the island.

Tiben Townsend, one of the island’s two executives, told the Daily Mail about the island’s residents’ experience over the past two years, given the island’s limited health facilities and an aging population. ‘We only have a small medical center on the island. We do not have intensive care. The population here is relatively older, with a number of medical cases. So we have to be very careful. ‘

According to him, another major challenge of the plague was the food supply, which usually arrives by ship. “There was a period of five months where there was no import of fresh fruit and vegetables,” Townsend said, adding that they faced the challenge and launched a hydroponic greenhouse last year to maintain food supply even in times of emergency. “As a result of all our precautions, which left the island clean of corona, we were able to celebrate Christmas and the New Year more or less as usual,” he said.

Closed for ten days on the island

Also in the vaccines sector the island faces a challenge due to the huge distance from the UK. Pfizer and modern vaccines need to be stored at temperatures of -80 to -60 degrees Celsius to stay in effect. Maintaining this low temperature during the entire voyage to Tristan de Conia was impossible.

As a result, the islanders faced a logistical challenge to obtain the Astra-Zenka vaccines. The vaccines had to be flown to the Falkland Islands and then shipped in refrigerators specially designed for that purpose. The vaccines arrived on the island in April 2021 and currently 95 percent of adults have two vaccines for corona, and the rest have not done so for medical reasons. Townsend noted that they are now waiting for another round of Cubid accelerators to ensure that the island’s population will have the best protection against the Omicron strain and its sub-variants.

In July 2021 passengers aboard the fishing boat MFV Edinburgh, which arrived on the island with a supply ship, began to feel unwell. They were tested and some of them were found to be positive. The islanders decided to allow passengers who were found negative to enter the island, but imposed a closure on the island as a precaution. “The community decided that everything would be closed for ten days,” Townsend said. “Offices, shops and schools were closed and people stayed in their homes except for one hour a day to feed the animals and walk the dogs. Basic groceries were sent from the store directly to homes.” After ten days, all the passengers who went ashore and returned negative were checked again, and life returned to normal.