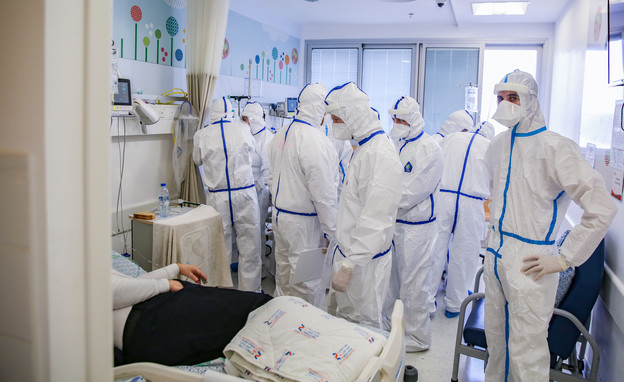 The death toll from corona in Israel rose to 10,977 this week, after about 30 patients died last week and close to 40 the week before, and the figures are not yet final. At least 12 people died in Mokorona on June 25, two days later, ten were killed, and at least five on June 29. As mentioned, the numbers may be updated upwards in the coming days. A two-year-old toddler who was ill in Corona died in Israel this week, but the exact cause of death has not yet been determined.

As the number of deaths updates, one can see the clear upward trend in the last two weeks, from 1.5 deaths from Corona per day on average, to more than seven a day at the end of June.

Meanwhile the disease itself is still in the process of spreading, with over 10,000 patients reported daily for the past week, and this is when there are many more patients who are not examined at all in an institutional examination and do not enter the records.

The number of corona patients hospitalized has risen from about 440 since the beginning of June to around 1,400 at the end of the month. The number of patients in critical condition reached 356 yesterday, a record number in the current wave.

Also in the world, there was a trend of an increase in morbidity this week with more than 712,000 diagnosed per day and about 1,400 known deaths daily. In recent days, the United States and Europeans have once again topped the contagion table, with the leading countries being the United States, Germany, France and Italy.

In Brazil, the rise in morbidity continues, with over 75,000 diagnosed per day, and it is in a country that has great difficulty getting tested. Mortality there is also on the rise, with over 200 deaths from corona per day on average. According to a new study, an average of two toddlers under the age of five die from corona every day Brazil. Most mortality is in a particularly poor area in the northeastern part of the country, where access to adequate health services is quite limited. With the increase in the burden on the hospitals that the current wave brings with it, the masks also return, When some of the federation countries recommend again Wear them.

Peru marked the beginning of their fourth wave this week, and in recent days has reported more than 5,000 diagnoses a day. Over 80 percent of residents received two doses of vaccine, and over 60 percent received a third dose. Now they have begun to give a fourth dose to the eligible. Over 213,000 people have officially died from Corona so far in Peru. The country has a very large excess mortality rate, and it is assumed that the true death toll is much higher than reported.

The steepest rise in morbidity among credible countries was recorded this week in France, where in recent days close to 150,000 infections have been detected per day. There, too, it is now recommended to wear masks, and even discuss the possibility of tougher measures to stop the wave.

While the world is dealing with variants BA.4 and BA.5, The fear of new variants arisesAnd this is even before there is an omicron-adapted vaccine in general and the current variants in particular.

Along with the corona, the monkey’s chickenpox disease continues to spread around the world. To date, over 6,600 infections have been counted. Spain now tops the contagions with 1,520 verified. It is followed by Britain with 1,235 cases as of last Friday and Germany with 1,054. In France there are on the verge of 500 cases and in the United States they have jumped forward to 460. Isolated cases have been recorded in the Beast Islands, Turkey and Puerto Rico. By Friday, 42 patients had been diagnosed in Israel.