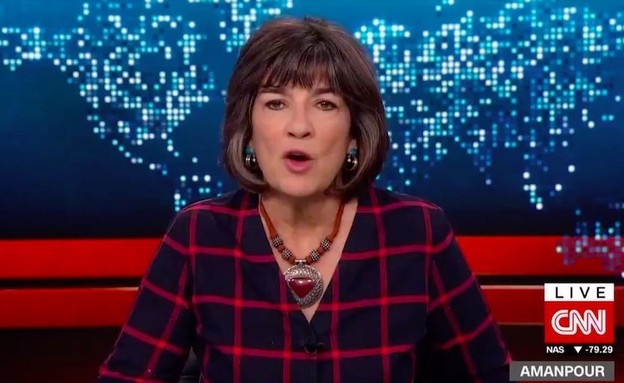 The esteemed TV TV presenter Christian Amanpour announced last night on the air that she will undergo the last chemotherapy treatment against ovarian cancer tomorrow. In June this year, she revealed on her CNN show that she had cancer and was in the treatment months.

Ovarian cancer, the second most common of the gynecological cancers, is very difficult to diagnose in its early stages. When the signs of the disease are so general, such as a feeling of discomfort in the upper abdomen, difficulty digesting and bloating in the abdomen, the likelihood that we will ignore them is quite high. This is the main reason why ovarian cancer is only discovered at an advanced stage and is therefore the leading cause of death among all gynecological cancers.

Every September marks the month of awareness of the serious illness. In Israel, about 400 women are diagnosed with cancer each year, a third of whom carry a mutation in the BRCA gene. Carriers of the mutation are at increased risk of developing breast and ovarian cancer. Therefore, early detection of carriers of the mutation will allow close monitoring of the carriers and early intervention to prevent ovarian cancer.

A major tool for dealing with ovarian cancer

One of the only tools to deal with the disease and its prevalence is by locating women who carry the mutation in the BRCA gene. This is a very common mutation that exists in 2.5 percent of the entire Ashkenazi population in the country. Carriers of a mutation in the BRCA1 gene have a 30.40 percent chance of developing ovarian cancer during their lifetime and a 60.80 percent chance of developing breast cancer. Carriers of a mutation in the BRCA2 gene have a lower risk, about 15 percent for ovarian cancer and about 60 percent for breast cancer. Carriers to the mutation can be found through genetic testing performed on a blood or saliva sample. When pregnancy is detected, the recommendation is regular follow.up every six months at a young age and at the age of 35.40 it is recommended to undergo ovarian resection to prevent the disease. It is a dramatic decision for the woman, but she can ultimately save her life.

Since the chance of the mutation being passed from parent to child is 50 percent, once a woman or man is found to be the carrier of the mutation, the parents will also be tested to locate the source of the mutation and refer the rest of the family for testing. Even when a woman is already diagnosed with ovarian cancer she undergoes a pregnancy test and if it turns out she is a carrier (as found in about a third of patients with ovarian cancer), the whole family will be tested to find more carriers in the family. In addition, when a patient is found to be a carrier, she will receive maintenance treatment with a PARP inhibitor drug after surgery and chemotherapy, which can increase the chances of survival and recovery.

As mentioned, the only way to prevent ovarian cancer is by detecting the BRCA gene mutation carrier In recent years, a genetic test has been introduced into the health basket to detect carriers of the mutation for every man and woman. To exercise this eligibility all you have to do is ask for a referral from your family doctor. However, not enough men and women turn to the test. On the one hand the awareness of the importance of testing among GPs, those who meet the community on a regular basis, is not high enough. On the other hand, the patients themselves do not know that they can request a referral, or are afraid to perform the test.