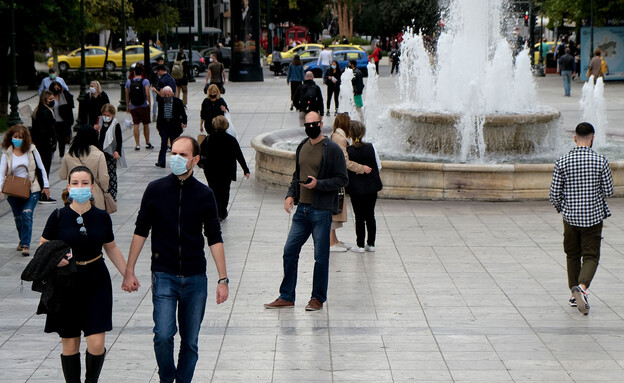 The tourist season in Europe and around the world has set off in the shadow of the sixth wave leading to dramatic increases in morbidity rates in most countries. The current wave is driven by the newer versions of the BA.4 and BA.5 omicrons that are contagious at much higher rates, even if not leading to serious illness.Currently, the vast majority of restrictions as they were in previous summer seasons have been lifted in most European countries. We examined the morbidity situation and the trend of the current wave spreading in the countries popular with Israelis, and we even found one country that is actually recording a welcome decline in the morbidity situation.

All cases rose by 78 percent from the average two weeks ago. Deaths dropped by 10 percent. Currently the total number is the highest since April. Versions BA.4 and BA.5 currently represent over 75 percent of cases in France.

Outgoing health minister Brigitte Bourguignon said last week that people in France have a “civic duty” to wear masks in crowded places, such as public transport, workplaces and shops, to help control the outbreak.

All cases have risen by 49.7% in the last two weeks, deaths have risen by 24%. A two-month record in the country. The BA5 variant now accounts for almost 66 percent of all infections.

It is not necessary to present a vaccinated, recovering certificate or a negative test to enter the country. However, surgical FFP2 masks are still required in public transportation. Chancellor Olaf Schultz warned this week that masks will ‘play a bigger role’ in the coming months than they are currently doing, to curb further spread.

All cases rose 136 percent from the average two weeks ago. Deaths increased by 26 percent. A five-month record in Italy. There is no need to present vaccine proof or a negative test since June 1, however, masks are required on public transportation.

Italy last Sunday became the fourth country in the world to have more than a million active cases, after the United States, with 3.5 million, Germany, with 1.5 million, and France, with 1.4 million.

All cases rose 62 percent from the average two weeks ago. Deaths fell by 17 percent. Currently the total number of cases including hospitalizations are at the highest level since February. Health Minister Carolina Drias said last week that she recommends everyone start wearing masks in public spaces.

Greece records the highest rate of new cases in three months. The Greek National Public Health Organization has reported that infections are rising fastest in tourist destinations, including Crete, and the Ionian Islands and the South Aegean.

There is no need to present a vaccination certificate or a negative test at the entrance to Greece. However, masks are required on public transportation, including on cruise ships, yachts and ferries used for island excursions.

An increase of close to 11 percent in new cases in the last two weeks, with Istanbul recording the largest increase in the number of cases. Since June 1 there is no need to present a vaccination certificate or a negative test nor is there a mask requirement.

All cases increased by 32% compared to last week. The number of hospitalized patients crossed the 10,000 for the first time since April, but is still much lower than the peaks of previous waves.

Portugal is one of the only countries to show a declining morbidity curve, a decrease of 44.2% compared to the infection rate two weeks ago. The country recorded records of morbidity in May and now appears to be nearing the end of the wave, which could signal the extent of the current wave in the rest of the world.

Following this, it removed all entry requirements for travelers this week, and as of July 1, there is no need to present vaccine proof or a negative test. Still at present, wearing a mask is a must in public transportation, taxis and visiting nursing homes, nursing homes and health care facilities.