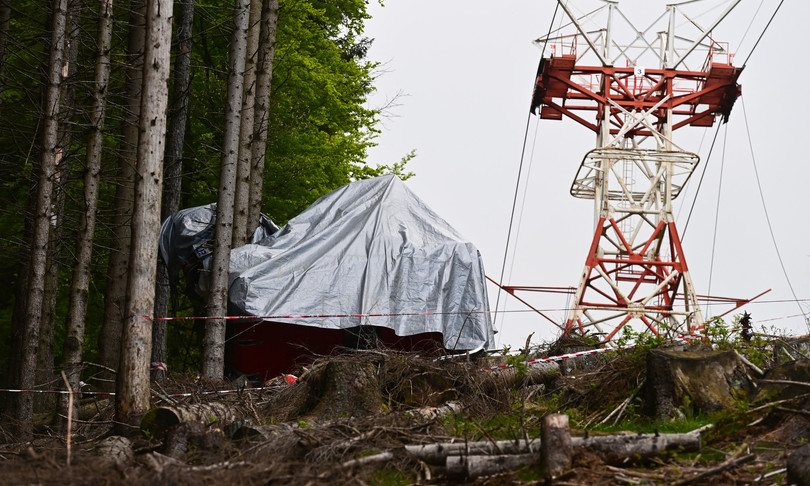 ` – The investigation of the Verbania prosecutor’s office is on video of the accident of May 23 at Mottarone qhen cabin number 3 with 15 people on board slowly approaches the arrival station of the cable car and then jumps, suddenly turns back and falls into the void.

Exclusive images, broadcast from Tg3, are shocking. The faces of the passengers on board, who were about to get off, were obscured. Security camera video shows the cabin wheeling up inches from arrival and sliding backwards at increasing speed for a few seconds.

Until the jump into the void of the cabin itself with the crash to a pylon and the impact on the ground which, however, is not seen because it occurs behind the mountain relief. Eventually, 14 people will lose their lives. Only little Eitan is saved. The video also shows the station attendant rushing to call for help when the cabin rolls back after the rope breaks.

The reaction of the president of Rai Foa

The president of Rai, Marcello Foa, from the Prix Italia, he says he is “deeply impressed” by the images transmitted by Tg3 on the tragedy of the Mottarone cable car.

“What happened – he maintains – must be teaching and reason for reflection for Rai. I have always respected the editorial choices of the directors and I have always refrained from commenting on them publicly, but as president of Rai in this case I cannot remain silent “.

And according to Foa “it is a duty for the public service, in circumstances like this, to carefully evaluate all the implications, starting with the ethical ones and respect for the victims and their families, in the awareness of the media and emotional weight of each image and of each comment “.

The note of the Prosecutor of Verbania

“I would like to emphasize the absolute inopportunity of publication “ of the images “that portray the last dramatic moments of the lives of the passengers of the cable car that crashed on May 23 on Mottarone, for the dutiful respect that we are all obliged to bring to the victims, to the pain of their families, to the condolences of an entire community” – This was written in a press release released by the Verbania prosecutor Olimpia Bossi.

A choice that causes controversy to explode, even within parties: “I am disconcerted by the dissemination of the images of the dramatic Mottarone cable car accident”, underlines the deputy and security manager of the Democratic Party. Enrico Borghi: “I say this as a parliamentarian, as a man originally from those places and as a private citizen. The pain of people must be respected, while in this society we transform it into a show. No!”.

Even the parent company dem in the Chamber, Debora Serracchiani expresses “a great dismay, questions to ask. I think of the relatives of the victims of the Mottarone cable car, of the terrible images sent back by TV and social networks. Where does the right to report stop and where does respect for life, death and pain begin? “.

Of the same tenor the position taken by the senator of Italia Viva, Laura Garavini for which “transmitting the images of Mottarone means trampling the memory of the victims and the pain of their families. The spectacularization of death has nothing to do with the right of the press”, explains Garavini: “On the contrary, it is a ‘offense to free information, of which Rai cannot be complicit. Unfortunately, we are witnessing an escalation of sensationalism in Italian information “.

“It is frankly unacceptable to broadcast the video of the Mottarone tragedy via social media and TV – he stressed Piero De Luca, deputy leader of the Pd group in the Chamber – are strong and sensitive images whose publication is prohibited by law and is also completely inappropriate, due to the respect due to the victims and the pain of family members “.

Cristiano Zuliani, of the Lega, speaking in the Chamber, asked the Presidency to “urge the bodies in charge to verify how these videos could be released– I wouldn’t want to be in the shoes of the victims’ families. “

“Some sites have corrected – he added – but in any case the video was now widespread, even by TV at national level. My question is: how far does the right of the press go? Is everything regular when we too often talk about privacy ? “.

The president of Noi con Italia has a different opinion Maurizio Lupi wondering: “Where are the vestals of freedom of information, of free and independent journalism, of ‘facts’ before ‘opinions’? A witch hunt was unleashed for the video broadcast exclusively by Tg3, which was then resumed from the other Rai news programs, from La7 and from all the main news sites. Emotionally strong images were shown, but journalistically, we believe, flawless “.