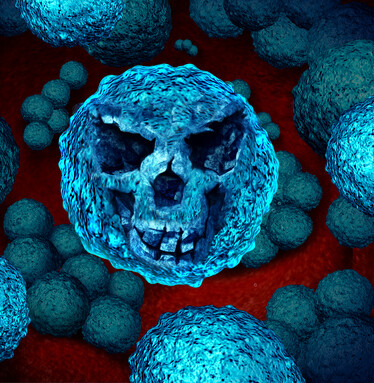 When we hear about “carnivorous bacteria” or “flesh-eating bacteria”, most of us probably imagine an army of tiny monsters invading our bodies and eating us from the inside. This misleading image was born because of the nature of the disease, which appears as if something is rapidly gnawing away at the patient’s skin and tissues. In practice it is a bacterial infection that causes Necrotic inflammation (Necrotizing fasciitis) in the infected organ.

The reports of such violent bacteria in the media are often accompanied by particularly graphic and dramatic descriptions. As a result, the impression may be created that this is a new or very common disease. So first, a calming siren: the disease is well known and quite rare. However, it is worth getting to know it, since it is a life-threatening phenomenon that can, in exceptional cases, harm even healthy people without underlying diseases and lead to their death within a few days or even faster.

The title “the predatory bacteria” is usually associated with the bacteria Streptococcus pyogenes (Streptococcus Pyogenes), which sit permanently in the throat of some of us without causing any damage, or at most cause a routine inflammation of the pharynx and tonsils. But when they penetrate other places in our body, for example through a skin wound, they can cause a serious and dangerous disease.

Despite the identification of the disease with streptococcus, there are More bacteria that are capable of causing a similar disease. the bacterium Vibrio vulnificus (Vibrio injurious), for example, is found in nature in salty water and can enter the body when entering the water with an open wound or cut and cause a severe infection. The complete suspect list of bacteria that may cause “predator bacteria” symptoms is very long. It has meningococcal bacteria (Neisseria meningitidis) that cause meningitis and bleeding in the skin; pneumococci (Streptococcus pneumoniae); Aeromonas hydrophila (Aeromonas hydrophila) that is usually found in water or soil; Clostridium bacteria; Staphylococcus aureus (Staphylococcus aureus); and even violent variants of the common bacteria vocal cords (Escherichia coli).

About half of the patients do not even know how they got infected with the bacteria. A cut in the skin, a wound, a severe burn or surgery may allow bacteria to penetrate the skin covering that protects us and enter our body. Even Children who have chicken pox may be infected through the open blisters. Vibrio vulnificus and other bacteria may also enter through the digestive system of people who have eaten infected marine animals. there is also reports For dangerous infections that started with a scratch or bite from a pet.

the development of the disease

Already in the first stages of the disease, patients suffer from severe pain. As a result, many of them seek medical help and end up in hospital emergency rooms. The trouble is that this is a rare and unusual disease, so it often happens that the doctors make a mistake in its diagnosis and send the patient home with suspicion of a viral disease, stroke, muscle injury or inflammation.

In a short time, a few days and sometimes even just a few hours, the bacterial infection may escalate to the point of life-threatening. The bacteria spread from the skin to the fascia – subcutaneous connective tissue that surrounds most of the body’s organs, including the muscles, nerves and blood vessels. There they multiply and release toxins which destroy the cells and cause a lot of tissue damage. They also secrete proteins that harm the functioning of the immune system and make it difficult for the body to stop the progress of the disease.

Later, spots appear on the skin due to bleeding or lack of oxygen Necrosis may form in the limbs or other organs, and sometimes the infected organ must be amputated to prevent the spread of necrosis. In rare cases, symptoms of Sepsis, which is a condition that develops when the body reacts violently and uncontrolled against the infection. These symptoms can include high fever, impaired kidney function and decreased urination. The lungs may also be damaged and the patients will suffer from breathing difficulties, edema and a drop in blood pressure. From here an even more serious condition of infectious shock (septic) may develop and important organs may stop functioning.

The people who are at a particularly high risk of being harmed by violent infections are those who suffer from a weak immune system and chronic diseases of the blood vessels and kidneys, from diabetes, from autoimmune diseases in which the immune system itself attacks healthy tissues, or cancer patients who undergo chemotherapy treatments that impair the function of the immune system. Such infections may also affect healthy people without known risk factors, but with a much lower probability.

Mortality from “predator bacteria” infections is very high and continues 25-75 percent of patients, depending on the bacteria, the risk factors and the circumstances of the disease. When treatment begins only in an advanced stage of the disease, Mortality rises above 80 percent, but even when treatment is given at an early stage, 30-50 percent of patients are expected to die from the infection.

Although it is a serious and dangerous disease, it is very rare. For ten years, between 2003 and 2013, died in the entire United States About ten thousand people from necrotizing tissue inflammation, which means an incidence of four people per million per year. in children The disease is rarer and its frequency is approximately four times lower than in adults. And the mortality is about 10 percent of all sick children.

The “predatory bacteria” and climate change

Experts warn that Global climate change And especially the rise in seawater temperature, may contribute to the flourishing of saltwater bacteria such as Vibrio vulnificus and help them spread to areas where they were hardly seen before. Published report In the journal Annals of Internal Medicine, he followed patients in the Delaware Bay area in the United States, and found that in 2017-2018, five people there were infected with the bacteria, and one of them died. All the patients came into contact with the waters of the bay or ate crabs and seafood caught in its waters.

Infections with this bacterium in the Delaware Bay are a very rare phenomenon, and its very presence in the bay water was unexpected. In the eight years prior to 2017, only one person was found in the area who was infected. The researchers speculate that the reason for the spread of the bacteria in the bay is the increase in water temperature.

Further support for this hypothesis is forthcoming From a study done at the University of Hawaii. The researchers estimate that by the end of the century, the number of Vibrio vulnificus bacteria in the Ala Wai Canal in Hawaii is expected to increase threefold, and they warn against swimming in the canal water. The researchers conducted environmental measurements in real time with the help of sensors and built a model to predict the levels of bacteria in the waterway, based on data such as the amount of rainfall, water temperature and dissolved substances in the canal. They predict that climate change will cause the temperature of the water in the canal to rise and the bacteria to multiply massively. According to their estimates, by the year 2100 climate change may lead to the spread of the bacterium along the coast of southern Hawaii, one of the most visited areas in the United States.

detect the disease in time

The infection cannot always be prevented, since bacteria are always around us. But if we detect it while a necrotic tissue inflammation is developing, we can stop the deterioration with simple and common antibiotics.

People with necrotizing inflammation feel very quickly that something unusual and abnormal is happening to them. Already at an early stage, they experience extreme pain in the infected area, which far exceeds what is reasonable for the wound or cut where the infection started. The pain alone is a worrying sign that should raise at least the suspicion of infection with a virulent bacterium.

As mentioned, within a day of infection, symptoms reminiscent of the flu or a skin infection are added to the pain, such as fever, redness, nausea, diarrhea, dizziness and general weakness. Later, swelling and edema develop around the infected area, the color of the skin gradually changes: turning blue, dark and gray, and sometimes a rash appears that turns into fluid-filled blisters. In the advanced stages of the disease, it is already very difficult to prevent a rapid deterioration in the patient’s condition, which will lead to organ failure and ultimately death.

Therefore, one of the most important things, which can significantly increase the chances of recovery and reduce the patient’s suffering, is an early diagnosis, which will allow treatment to begin as soon as possible. The treatment includes giving antibiotics directly into the vein, which prevents the infection from spreading to other tissues. However, due to the damage to the normal blood flow to the already damaged tissues, the antibiotics will have difficulty penetrating them and many times there will be no choice but to remove the damaged tissue or even amputate the infected limbs. If necessary, the patients also receive blood pressure medication, oxygen therapy, heart monitoring, blood transfusions, and sometimes even antibody therapy to help them fight the infection.

Fortunately, Streptococcus pyogenes bacteria are not resistant to antibiotics, so as long as the antibiotic treatment is started early the chances of recovery from the infection are quite good. But many times the tissue destruction continues even after the bacteria themselves have died, due to the activity of the toxins they have already secreted. Therefore, even when the treatment begins at an early stage of the development of the necrotic inflammation, close to a third of the patients will die. The death rate increases to 60 percent if the infection is accompanied by infectious shock.

Despite the picturesque name given to the bacteria that cause necrotizing tissue inflammation, they are not really “carnivores”, and certainly not common. However, they are indeed very dangerous for those infected with them, and it is important to raise awareness of the disease and early diagnosis, in order to increase the patients’ chances of recovery and reduce their suffering.

If you still crave predatory bacteria, there are indeed bacteria in nature that honestly deserve this title. The real predators in the tiny world of the single-celled creatures are bacteria that prey on other bacteria and feed on them. But that is already a topic for a separate discussion.