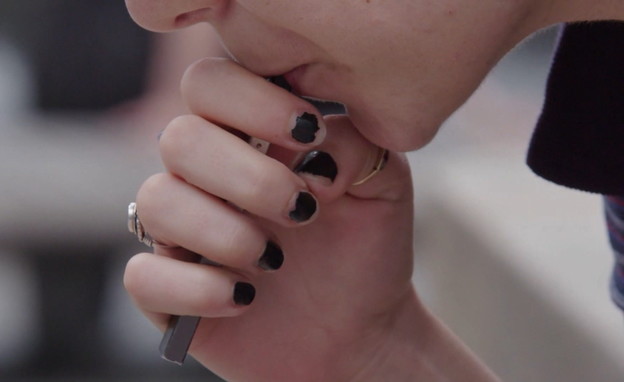 A disturbing report by the “Smoking Eradication Initiative” reveals that almost a decade after the introduction of electronic cigarettes to Israel, they have become the leading smoking product among the youth. A third of the youth in Israel have experimented with electronic cigarettes, which for the first time have also become their preferred smoking product. A second child and every third teenager began their journey as smokers using an electronic cigarette, which became the first experimenting product among children aged 12-14.”Within four years, teenagers between the ages of 15-17 doubled the percentage of daily smoking, in 2019 we were at 4.7% and now at 9.8%,” says Shira Kaslo, CEO of the Smoking Eradication Initiative. “In 2022, the transformation will be complete. For the first time, electronic cigarettes overtake combustible cigarettes and serve as the leading smoking product among the youth aged 15-17 in Israel. Among the 18-19 year olds, a new record was broken in the number of smokers: from 25% in 2019, to 35% in 2021 and up to 39% this year, which is 1.5 times higher than the smoking rates in this age group before the distribution of cigarettes.”

A sharp increase in teenagers who purchase tobacco themselves

The conclusion of the study is that middle age has become the key period not only for the first and varied experience with smoking products, but also for the experimenters to become active smokers for the rest of their lives. Another conclusion is that smoking rates in Arab society are higher than those in Jewish society in all age groups. The biggest gap is found in the 12-14 age group, where the gap in smoking rates is three times higher among Arab children compared to Jewish children (12.8%, 3.4% respectively). At the age of 15-17, the gap between the two companies is reduced to only 1.5 times (38.3% versus 25.9% respectively). This gap is maintained at later ages. In addition, the smoking frequency of Arab teenagers aged 15-17 stands at 17% compared to 10% of their counterparts in Jewish society. Despite the prohibition in the law regarding the sale of smoking products to minors, the study found a sharp increase of 62% in the proportion of teenagers who purchase smoking products themselves: from 26% in 2019 to 43% in 2022.

“The earlier you start experimenting, the less experiments you need to become an addict,” says Keslo, “because regular cigarettes have lost their charm, also because they already know the dangers inherent in them, and also because many countries have started a war against them. They had to invent the reinvented themselves, and came the electronic cigarettes that do not contain tobacco but contain nicotine. The tobacco companies took advantage of the fact that, unlike regular cigarettes, which decades of research have already proven the dangers of smoking, electronic cigarettes still do not have such studies, and the companies could claim that they are much less dangerous.”

In a study conducted at the School of Public Health at Johns Hopkins University in the USA with the participation of 9588 American teenagers, it was found that the use of electronic cigarettes caused a 61% increase in reports of sleep disorders, “regular” tobacco cigarettes were associated with a 62% increase, while combined use Both products doubled the risk of suffering from sleep disorders compared to teenagers who never smoked at all.

What are the dangers of smoking electronic cigarettes and are they less dangerous than tobacco cigarettes? Professor Hagai Levin mHadassah Medical Center, Chairman of the Association of Public Health Physicians in Israel, and Dr. Yael Bar-Zev, an expert in public health and a senior lecturer at the Hebrew University.

Levin: “The electronic cigarette belongs to the entire spectrum of products that are addictive and harmful to health. Those who use one type have a chance to switch to another type. Any teenager who uses any type will continue to other types, including tobacco cigarettes. For me, this is one package. The question is whether there is a product that is more or less harmful This is a question that will take years before we can answer it. A regular cigarette kills one out of every two smokers. We already know that. The current epidemic, especially among teenagers, is disposable electronic cigarettes.

“Part of the difficulty with an electronic cigarette is dealing with it, like buying a device and buying liquid. The companies built a ready-made product with the filling liquid and it’s relatively cheap. Electronic cigarettes contain a substance called ethylene glycol, flavorings of various kinds, and studies show that all kinds of heavy metals leak out of the device itself, and there are There is a danger of being exposed to toxic chemicals, and of course they contain nicotine. The use of nicotine adversely affects the developing brain up to the age of 25. Because electronic cigarettes have become an epidemic among teenagers, they cause harm to public health and I am very afraid. It is difficult to compete with cigarettes and the dangerous substances they contain, but it is still not Few risks. A lung disease syndrome associated with electronic cigarettes has been discovered in the US. There were cigarettes that exploded in the user’s face.”

Last June, the FDA banned the use of Joule electronic cigarettes. According to the FDA announcement Joule’s application for approval of the products did not include enough information about the risks that may arise from their use – among other things, regarding the fear of chemicals leaking from the pods. How do we deal with this phenomenon? At the end of 2018, the law was implemented according to which electronic cigarettes are smoking products for all intents and purposes. This means that every law related to regular cigarettes also includes the electronic ones. What is the practical meaning of this?

Levin: “There are a number of countries in the world that completely ban electronic cigarettes. There must be restrictions on all of these products in terms of accessibility to teenagers and we must make sure that the price is not attractive. In Israel the regulatory system works very slowly in relation to the changes that the companies make. In the United States, approval is required for every new product and therefore It is easier to block it. An existing product is much more difficult to remove from the market from a legal point of view. In Israel, the market has been breached and during the Corona period disposable electronic cigarettes came in, the use of which is increasing. Teenagers who would not have thought of using cigarettes because cigarettes are old-fashioned, dirty, disgusting, smoke the electronic ones which are considered innovative and cool, but their use turns them into nicotine addicts.”

So what’s next, how do you stop the plague?

“We petitioned the Minister of Finance two years ago that he does not sign off on taxation,” says Keslo, “Only last November did he sign such a decree. There is already taxation, but it is changing because they are unable to pass approval in the committees. Taxation raises the price. Israel is a signatory to an international treaty To prevent smoking, there are effective strategies, the most effective of which is taxation because it does not depend on enforcement and Israel is bad at enforcement.

“If the state is unable to deal with enforcement, it should use stronger tools, such as limiting the points of sale or completely prohibiting the introduction of the product. There are 35 states that have banned the marketing of electronic cigarettes. The state receives a failing grade in the fight against smoking and protecting the future generation.”

Coronavirus in the world November 26, 2022: about 646 million infections, more than 6.6 million deaths. Statistics by country

Why do women fake an orgasm?

Why is it important to treat rhinitis in children and babies?