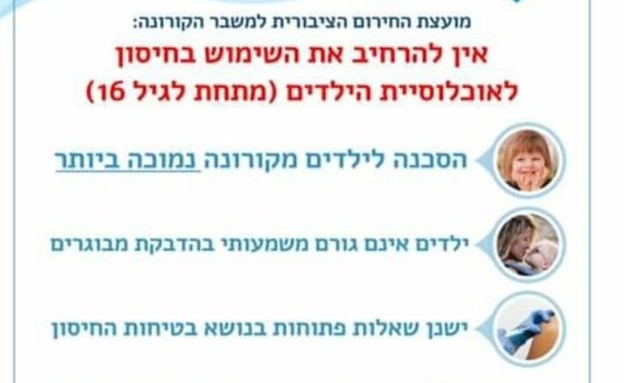 In recent days, a poster has been circulated on social media under the name of the “Public Emergency Council for the Corona Crisis,” calling for an end to the vaccination campaign for children, following FDA approval for childhood vaccines last Tuesday. The poster itself also contains the names of esteemed professors who allegedly signed the reading, but the DIP claims that the poster was forged, probably any other source of information from April. , And even said that the use of their name is a “scandal”.

Following the publication of the same poster, the IDF wanted to clarify: “The official publications of the Public Emergency Council for the Corona Crisis appear on the website and on the Facebook page. The announcement in question has been circulating on the net for several months. The council did not make the announcement or distribute it. As a matter of fact, the council does not recommend a sweeping vaccination for children, but in favor of allowing it to parents who are interested. The council opposes the vaccination campaign in children, and certainly the aggressive manner in which it is used against this population. The campaign of pressure exerted on parents and children is offensive and immoral. The council does not oppose the possibility given to parents who want to vaccinate their children and even supports the recommendation to vaccinate children in risk groups. ”

As mentioned, it is not clear who distributed the poster, which completely contradicts the recommendations of the Ministry of Health, as well as many experts. It is estimated that the source is among vaccine opponents and corona deniers.

“We did not distribute the poster and when the directive was issued to lower the age of vaccinators under the age of 65, they argued that it should be considered. Someone decided to put it out now in a different context and one can guess why,” adds Professor Zvika Granot, a member of the DIP. Distribute it now. When given at this specific timing, it has meanings and we are not really opposed to vaccines. It was not published in our name and opinion. It’s an old thing that’s irrelevant today and is just meant to blacken us. We have to deal with it, “he said.” We do deal with this issue of getting vaccinated or not getting vaccinated but this publication is really not on our minds and not our message. “