The disease affects 1 in 10 children 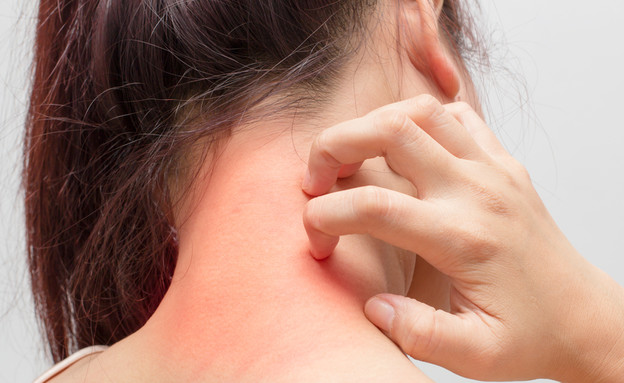 When Sharon and Meital Baruch noticed a rash that appeared on the body of their son Yahli (7), they were not surprised. Their two older children, Tom and Rumi, also suffered from a similar phenomenon in their childhood that passed spontaneously after using topical ointments. “We knew the symptoms and were not too excited. It was clear to us that this time too the phenomenon would pass on its own after a short period,” says Meital. “Nothing prepared us for what we were going to experience with Yahli.”

Atopic dermatitis is a chronic skin disease and its prevalence is common among one in ten children in Western countries. It is a dermatitis that can cause a rash and severe itching and in most cases appears mildly and passes spontaneously in adulthood. In some patients, however, atopic dermatitis appears to be severe and does not go away on its own. In those children, the disease significantly impairs their quality of life and limits them considerably.

“Yahli’s older brothers suffered from atopic in its mildest form,” says Sharon, Yahli’s father, “with him it was completely different.” According to him, already at a young age dryness appeared on the face and as it grew, the itching got worse. “There were times when he would wake up in the morning and all his bedding would be stained with blood after he scratched himself all night,” says Sharon.

No fur dolls, with air conditioning around the clock

In most cases, children suffering from the disease need help and support from those around them in general and family members in particular. Members of the Baruch family were also required to adapt to the new reality after Yahli was diagnosed with atopic dermatitis. In order to alleviate Yahli’s suffering, the Baruch family made adjustments in their home to the new reality. Concerned parents have purchased air-filtering devices with filters adapted to dust sensitivities, as well as non-dust-collecting anti-allergenic sheets. “The harder part was getting the stuffed animals out of the children’s rooms,” Meital says, “the sheets, rugs and curtains were also removed from the house, all to reduce as much as possible the amount of dust in the house that directly affects Yahli’s atopic dermatitis.”

Also in terms of the daily routine, the Baruch family had to make adjustments. “It was not a simple process,” Meital describes. A low temperature may alleviate the symptoms of the disease because sweating causes intense and uncontrollable itching, so the air conditioner in the Baruch family home runs almost constantly. “The air conditioner is turned on at the highest intensity even if it is cold for the rest of the household. We do this to prevent Yahli from sweating and scratching and thus injuring the skin. We always try to lower the stimuli that aggravate the disease.”

“The complex situation in which the family has been for years leads to tensions and constant alertness, as Meital says:” At the age of two we arrived at the emergency room when Yahli was completely apathetic. His body had a rash and he suffered from high fever. The doctors quickly attacked him “All the time under pressure and stress. Our biggest fear is that the wounds will cause infection. It is scary and dangerous.”

“It requires us to miss quite a few working days”

The Baruch family has decided to avoid situations in advance that could irritate Yahli’s illness. “We live very close to the sea but we haven’t visited there in seven years,” says mother Meital. We have not visited the sea since that day, not even with the older children, “she adds. “Even family trips that involve a little walking or effort can be interrupted abruptly. It’s part of the routine of life that is imposed on us. We explain to them that as a family we have to take care of each other and they help a lot.”

The parents say that Yahli’s illness causes them to lose work days. “Sometimes you have to stay with Yahli at home and take care of him or alternatively go for tests and treatments. This requires us to miss quite a few working days,” says Meital. Cases where we had to leave everything and go home. ”

As a result of atopic dermatitis and the incessant itching Yahli wakes up at night and the parents are required to treat him and calm him down. “Sleepless nights create tension and stress,” says Sharon. “Every attack lasts at least half an hour and until you fall asleep again you lose at least a few hours of sleep a night,” says Sharon. It is not a simple situation physically and mentally. ”

Yahli is treated with steroids and ointments designed to relieve the severe itching from which he suffers. However, despite the drug treatment, his condition has worsened very recently and the itching has become more frequent. “We received approval for special treatment abroad and in the coming days we will take off with high hopes that his condition will improve and that we will be able to function as a family again,” says Meital.

The Israel Atopic Dermatitis Association directs, advises and supports patients and their families.