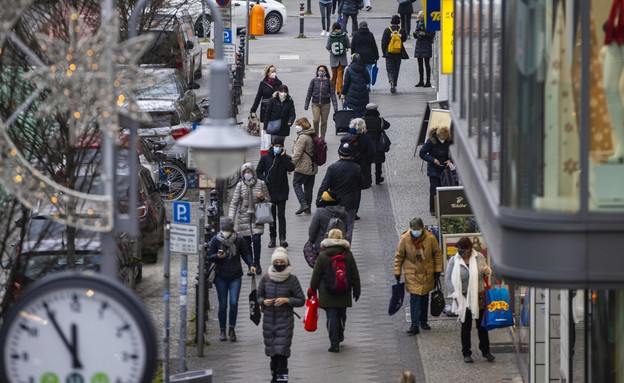 The fourth wave in Israel was a few months ahead of what is happening now across Europe. The alarming outbreaks in recent weeks, especially among the unvaccinated, are causing the various countries to think of new and controversial measures, with the aim of curbing the current wave. Just before Christmas, and in light of the faltering immunization rates in some countries, it seems that all the options on the table, including restrictions on ‘unvaccinated’ only.

At a news conference last Thursday, the head of the World Health Organization, Hans Klooga, said the continent could see another half a million deaths by February, and hung the rise of recent weeks on ‘inadequate vaccination’. Representative of the World Health Organization on Covid-19, Maria van Krakow, said that over the past four weeks morbidity rates across Europe had skyrocketed by more than 55%, despite a “sufficient supply of vaccines”.

Germany: Steps are being considered

“If hospital morbidity worsens, then further restrictions on unvaccinated people are possible,” said Chancellor Angela Merkel. The fourth wave in Germany is at its peak, and there is a steep increase in the number of patients in intensive care units in certain areas, especially those with a lower vaccination rate. In the last 24 hours, 154 deaths have been recorded, compared to 121 a week ago, and among the many unvaccinated Germans there are more than three million people over the age of 60.

Austria: No entry without vaccinated

Austria’s new chancellor, Alexander Schlenberg, announced last week that unvaccinated people would be barred from entering cafes, restaurants, hairdressers and even hotels and events attended by more than 25 people. Before the ban takes effect, there will be a one-month adjustment period, after which entry will not be allowed for those who are not vaccinated with 2 doses. The City of Vienna has already announced last Thursday that it is banning unvaccinated people from entering restaurants, and it is possible that later the ban will be extended to hairdressers and other places.

The vaccination rate in the country stands at 64% who have received 2 vaccine doses, one of the lowest in Western Europe, perhaps under the influence of the country’s far-right Freedom Party which encourages not getting vaccinated. 8,594 new cases of the virus were detected last Thursday, a drastic increase of tens of percent in recent days, the closest to a record 9,000 cases per day, last November.

Italy: We are not denied either

Following Austria’s precedent-setting decision, immunologist Sergio Abergini, a member of the scientific committee advising the Italian government, told a news conference that it was a radical but very important choice, “I think any decision that leads to a reduction in risk should be made.” He did not rule out that similar restrictions on the unvaccinated would be imposed in Italy in the event of a need, adding that if the abnormal gatherings of the unvaccinated continued, there might be special provisions.

Yesterday (Saturday) the new regulations went into effect across the country, according to which anyone who has not been fully vaccinated will be required to present a negative check, to enter any closed public space including banks, shops, government buildings and hairdressers, as well as restaurants and cafes. Currently, supermarkets and pharmacies have been exempted from the new ban. In addition, all non-vaccinated public and private sector workers will have to present negative tests twice a week to enter their workplace, instead of once as is currently the case.

Severe morbidity has been climbing in recent days mainly in northern Greece, where there are reports of severe shortages of beds in the intensive care unit of public hospitals and sending patients for treatment in private facilities. 61% of the population in Greece was vaccinated in 2 doses.

The state of Victoria in Australia has experienced a particularly long and rigid closure, now it is reopening but not to everyone. Beginning this month, the retail sector is open to the general population, but from November 24, when the country is expected to reach 90% vaccination targets, “vaccinated economy” definitions will take effect, restoring strict restrictions on all unvaccinated Victorians. Prime Minister Daniel Andrews has warned that “unvaccinated Victorians may continue to be locked up for 2022.”

Last weekend a special 72-hour closure was announced in the Australian city of Darwin with only unvaccinated restrictions. The vaccinated will be able to continue with the routine of their lives, with the restriction of masks only. Anyone included in the restrictions will be able to leave the home only for medical purposes, essential services and sports activities. The closure comes after the first ever case of the virus was discovered in the city.