Graduating is still worthwhile. 88% work 5 years after the title 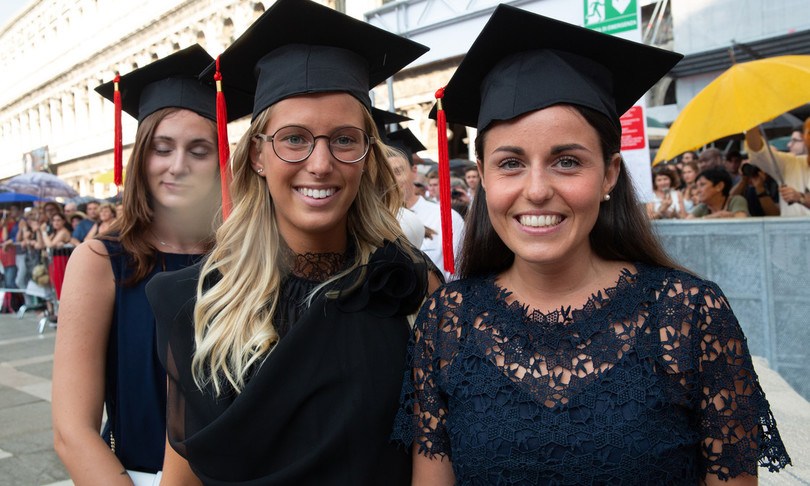 ` – Graduating is still worthwhile. This is what the AlmaLaurea 2021 Report on the profile of graduates reveals. In fact, as the level of the qualification held increases, the risk of being ‘trapped’ in the area of ​​unemployment decreases.

Graduates enjoy important employment benefits compared to upper secondary school graduates during their working life: according to the most recent Istat documentation, in 2020 the employment rate of the 20.64 age group was 78% among graduates, compared to 65 , 1% of those with a diploma. Furthermore, the most recent OECD documentation available highlights that, in 2018, a graduate earned 37% more than a secondary school graduate.

The pandemic has hit women and the Center.North

In 2020, the employment rate (which also includes those engaged in paid training activities) was 69.2% among first level graduates and 68.1% among graduates one year after graduation. second level of 2019

In 2020, five years after graduation, the most widespread form of contract is the permanent employee contract, which affects more than half of the employed. Over 65.0% of employed, at five years of age, consider the degree title “very effective or effective” for the performance of their work.

The average age at graduation for all graduates in 2020 is 25.8 years: 24.5 years for first.level graduates, 27.1 for single.cycle master’s and 27.2 years for master’s graduates biennial.

A figure that also takes into account the delay in enrolling in the university course (this is the delay with respect to the ‘canonical’ ages of 19, for the first level degree and the single cycle degree, and 22 years, for the two.year master’s degree), which among 2020 graduates on average is equal to 1.4 years.

The age at graduation has significantly decreased compared to the university system prior to the Reform DM n. 509/1999 and continued to decrease (it was in fact 26.9 years in 2010) until 2018, and then remained almost constant.

Regularity in studies, which measures the ability to complete the degree course within the time limits set by the regulations, has recently registered a constant and marked improvement, albeit in the last year due to the extension of the closure of the academic year granted to students for the Covid.19 emergency. If in 2010 39.0% of graduates completed their studies in progress, in 2020 the percentage reaches 58.4%, in particular 64.3% among two.year masters, 57.7% among first level graduates and 48.6% of single.cycle master’s degrees.

Internship and abroad are the trump cards

What is the educational background of the 2020 graduates? There is a prevalence of high school diplomas (75.4%) and in particular the scientific (41.3%) and classical (14.7%) diploma. The technical diploma follows with 19.5%, while the incidence of professional diplomas is residual (2.4%). The share of high school graduates in the last ten years has increased considerably, from 68.9% in 2010 to 75.4% in 2020 (+6.5 percentage points), particularly at the expense of graduates with a technical degree, which drop from 25.8% to 19.5%. In terms of composition by type of diploma, limited differences are observed between first level graduates and two.year master’s degrees (high school graduates are respectively 72.6% and 75.1%), while single.cycle graduates are characterized by a strong incidence of high school qualifications: 89.8% in fact have a high school education, in particular scientific (48.6%) and classical (28.6%).

The family context affects the university choices of young people. 31.6% and 22.5% of AlmaLaurea 2020 graduates come from middle.class families, respectively white.collar and self.employed, and 22.4% from families of higher social class (where the parents are entrepreneurs, free professionals and executives) and 21.9% from families in which parents hold executive professions (blue.collar and executive employees). The percentage of graduates from the highest social backgrounds rises to 33.3% among single.cycle master’s degree graduates, a course of study which, as is well known, involves a longer investment forecast than first.level degrees, an investment that it will often continue with further specialization courses.

The number of graduates with foreign citizenship is increasing

The share of graduates with foreign citizenship is 3.9%. And it is slightly increasing: according to AlmaLaurea data it was equal to 2.9% in 2010. These are increasingly young people who come from immigrant families and resident in Italy: as many as 41.1% of graduates of non.Italian citizenship have obtained a secondary school diploma in our country: this share was 28.2% in 2011.

Instead, the share of foreign citizens in possession of a diploma abroad, probably the segment of the population who moved to Italy at the time of university choice, is 2.3% of the entire population investigated, a percentage almost stable in recent years. The value rises to 4.8% among the two.year masters and falls to 1.3% among the single.cycle masters and to 1.2% among the first level masters.

As regards the origin, while in the totality of foreign citizens, including graduates in Italy, almost half come from Europe (in particular from Romania and Albania, 11.6% and 9.7% respectively), in the group of foreign graduates who have graduated abroad, the share of those coming from Europe drops (35.2%) and the most represented State is, with 10.9%, China.

Foreign graduates who have graduated abroad are directed towards specific disciplinary fields, such as architecture and civil engineering (4.1%), as well as information technology and ICT technologies (4.0%); on the contrary, in three disciplinary groups (education and training, law and, finally, physical and sports sciences), less than 1.0% of foreign graduates with diplomas obtained abroad are less than 1.0%.